Of Trees and Paper and Pins 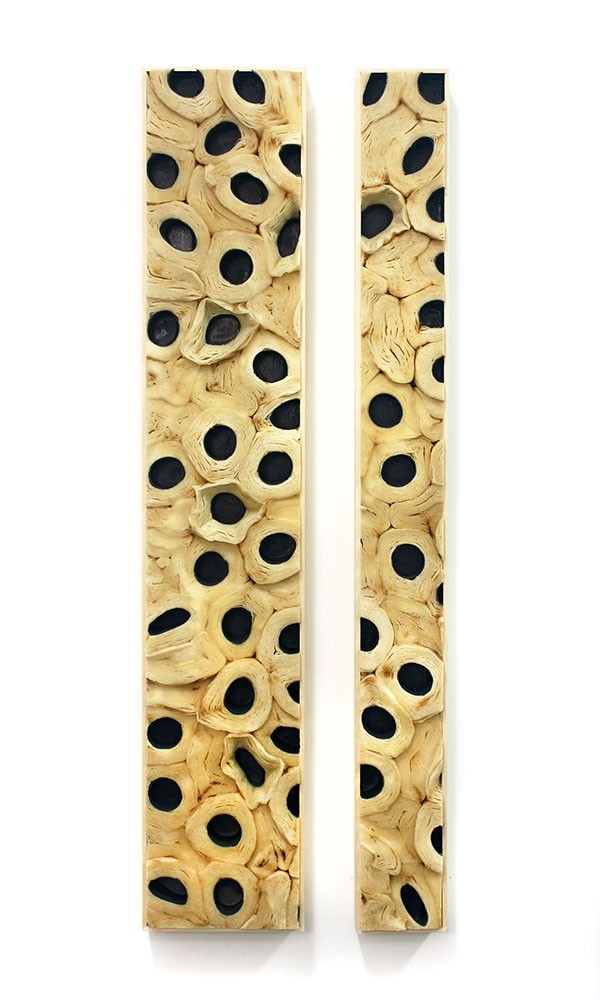 EXTRA: Reception at Conrad Wilde from 6 to 9 p.m., Saturday, June 2, during Art Cruise, an evening of multiple openings by members of the Central Tucson Gallery Association. Additional works by Jessica Drenk are on view at Sand-Reckoner Tasting Room, a wine venue at 510 N. Seventh Ave. #170, at Sixth St. 833-0121.

Artist Jessica Drenk has a theory about Montana.

She grew up in the wide-open state, where "there's more land than people," she says by phone from her current home in Florida. "I've always been drawn to natural forms. My theory is that growing up there, walking the landscape, inspecting it, I visually took in the elements of nature: rocks, tree bark, lichen. That direct contact shaped nature in my brain."

When she went off to college at Pomona, in the densely urban environs of Los Angeles, and later to Tucson, where she got a master's from the UA for her graduate degree, she pined for the wilderness. And in response she started making startling experimental art that meshed a consciousness of the environment with everyday human-made objects.

She shaped these oddball elements into elegant wall works that evoked the natural world. The pipes conjured up ocean waves, the pencils looked like tree stumps and the book fragments suggested the tangled neurons of the brain.

As she puts it, she was "turning man-made objects into something that has the sense of nature."

But she took a risk the first time she got a solo gallery show. She was only a second-year grad student when Miles Conrad offered her an exhibition in Conrad Wilde, his highly regarded contemporary gallery.

Conrad had been impressed by an installation of her altered book works at the UA Main Library. Those haunting pieces, Conrad remembers, commented on the "obsolescence of books" and looked like relics a future explorer might find in a defunct civilization.

Drenk had made the pieces by cutting and waxing abandoned books and dousing them in wax, then shaping them into artworks that resembled "rocks or fossils or animal nests," she says.

She had also begun experimenting with something new: toilet paper.

"I had been looking for material with a completely different meaning from a book, but still a common cultural object," she explains.

"Toilet paper is mass-produced. I can cut, squish, burn and change it," she says. And when multiple squished rolls are pushed together and assembled into a wall piece, "the toilet paper starts looking biological, like soft cell tissue. I got intrigued by the idea of the body as a pile of plant cells."

They were serious pieces of work, "pointing out our biology" while contesting old ideas about appropriate materials for art.

So for her inaugural show, she put together a batch of the toilet paper works and excitedly dropped them off at the gallery.

It was only after she got back home that she began to fret.

"I thought, 'What have I done?'" Accustomed to the weird and wild materials favored by her fellow grad students, she hadn't considered what the outside world's reaction might be.

She needn't have worried. Conrad specializes in cutting-edge art, finely made of out-there materials, and he happily accepted the new toilet paper work. Her show was a success, so much so that Conrad featured it again in an end-of-season round-up celebrating the year's most interesting work.

Nowadays, a decade later, Drenk is flourishing; in the last year, she has had no fewer than nine exhibitions around the country, including solo shows in DC and Dallas. And in April, Conrad Wilde opened Jessica Drenk: In Aggregate: a large solo exhibition of her new—and eerily beautiful—works. Originally set to close in May, the show has been extended through the end of June.

The 14 pieces on view are all meticulously crafted, and though they conjure up forms in nature, they also veer toward abstraction. They're made of the same materials Drenk was experimenting with in grad school—pencils, PVC pipes, books and yes, toilet paper—but clearly she's spent the intervening years refining and perfecting them.

"Soft Cell Tissue: Centriole" is a two-part vertical wall piece, with maybe 50 rolls of toilet paper crowded together. It does look like skin cells seen through a microscope or even blood platelets, but it's also a pleasing pattern piece that alternates the black of the cardboard at the center of the rolls and the stained white of the paper.

Books are a recurring theme.

She uses cast-off books that nobody wants, out-of-date encyclopedias and cheap pulp fiction. Early on, art fans confronted her over the destruction, "but nobody questions it anymore," she says. "I think that reflects that we've gone so digital. We see how books are disappearing."

In "Bibliophylum," these vanishing books have been reduced to mere specimens, remnants of the past. They're tiny, feather-like fragments that Drenk painstakingly pins to the wall, just as a biologist might pin up a display of dead butterflies facing extinction.

To make the piece, she drenched old books in wax and then carved them into thousands of small pieces, colored like dying leaves in autumnal browns and beige.

Each time the work is shown, Drenk must painstakingly re-create it; it took her a full day to resurrect it at Conrad Wilde.

"I have a sense of it," she says. "I create an oval on the wall," and then fill it with the fragments. "It's almost an improvisation."

"Strata 3" borrows from the world of geology. A fixed piece, long and horizontal, it has twisted bits of books colored the mineral tones of copper and gold. Fastened to a board, the tiers look for all the world like a geologist's rendering of the earth's ancient layers. And it's no accident that books, or what's left of them, are buried in those strata.

Drenk's works may be about cultural change, but they also sound off warnings about threats to the environment. Sometimes the two themes merge: human-made objects.

There's a "connection between the man-made world and the natural world," she says. "We cut down trees; we mine. These things that we use and have come to need come from nature, but we distance ourselves from that. The more stuff we take out of nature, the less we have."