You might think that choosing which person to smooch at midnight will be the hardest decision that you'll have to make this New Year's Eve, but deciding exactly where you'll ring in the new year might be just as tricky. As 2014 winds down you can be sure that you're starting 2015 off with a bang by hitting up one of these 10 New Year's Eve celebrations. Whether you're a food fanatic, local music snob, or a film buff, there's an event to satisfy your end of the year desires—after all, resolutions don't start until the 1st, right?

Dancing in the Dark

For most Tucsonans, the battle for your NYE dollar will likely end up on Congress Street. Both Rialto Theatre and Hotel Congress are hosting completely different, but equally entertaining events. Rialto technically has two options, though. For a more casual celebration, R Bar is serving up their craft cocktails with two live performances from Howe Gelb. Inside Rialto proper, Chicha Dust is going glow in the dark with a wild psychedelic cumbia dance party called Tropidelica. DJ Dirty Verbs will also be spinning inside Rialto to keep the dancing going all night. Both events feature complimentary party favors and a champagne toast. Plus, $10 in advance via Rialtotheatre.com or $15 the day of gets you into R Bar and Rialto Theatre for New Year's Eve, so this event is really a twofer.

Dropping Tacos in a Good

If you're sitting there wishing you could be in New York City this New Year's Eve, do yourself a favor and save about $500 (at least) and just go to Hotel Congress' Tucson Times Square block party. With three stages featuring live entertainment from Orkesta Mendoza, The Zsa Zsas, and the Strange Family Circus, the Congress indoor and outdoor stages will be packed with performers. Food trucks, a pop-up tequila cantina, and a champagne toast await Congress celebrators as well, but let's be honest—the main draw is the 15-foot taco drop at midnight. If you opt to go VIP at Congress, you'll also be privy to a special menu with prime rib, lobster tostadas, spicy crab arancini and more, as well as a special bar and a special room for the special VIP ticket price for $125. Less special tickets are also available for $25 by visiting Hotelcongress.com.

Mercado San Agustin's Agustin Kitchen is giving you the opportunity to end the year like you spent it—like a boss. The five-course prix fixe New Year's Eve dinner at the restaurant will include upscale options like oysters, lobster, a roasted beet salad, a tomahawk chop for two and, of course, dessert. You can reserve your spot at Agustin anytime between 5 and 11 p.m. that night by calling 398-5382, but make sure you do if you're interested because reservations are required for this one-night-only dining event.

Rick Braun is leading the pack of musicians presenting the sounds of New Orleans at the JW Marriott Starr Pass Resort for New Year's Eve. The trumpeter is joined by saxophonist Richard Elliot, guitarist Peter White, and vocalist Larry Braggs. Right at midnight, the band will queue up "When the Saints Go Marching In," so if you want to pretend like you're spending the start of 2015 in the French Quarter, then this is the way to go. The event also includes dinner and a champagne toast with special room rates at the hotel for attendees. Tables range in price from $199 to $269 per person depending on location. For tickets and more information, visit Tucsonnewyearseve.com.

Stop by Casino del Sol's bingo hall for a night of Mexican folk music featuring David Lee Garza, Marcos Orozco, and Grupo Alamo. From 8 p.m. until 1 a.m., the free event will bump Tejano sounds, but make sure you stay until midnight (obviously) because the balloon drop, champagne toast, and menudo will all happen then. For those indecisive party-hopping folks, Casino del Sol is also hosting Latin soul and a Michael Jackson tribute show in the conference center.

A Whole New Bar at

Although this basement bar used to be a mortuary, Tough Luck Club (or TLC) will surely be a lot livelier on Dec. 31 for the grand opening celebration. Bartender Niklas Morris says to expect inventive craft cocktails in a laidback, not pretentious atmosphere. For the full scoop on the brand new bar under Reilly Craft Pizza and Beer, you can read the full feature in this week's Chow section.

Dine and Bash at

Why not do dinner before heading out to your final party destination? Well, if you're planning on finishing the evening downtown, the Downtown Kitchen and Cocktails is your best dining bet for the night. Foie gras mousse crostini, short ribs, slow braised pork sugo ravioli, pork belly and crab gorditas, and champagne sundaes are just some of the decadent menu options at Downtown. You can choose either a three-course menu for $50 or four for $65 per person (both plus tax and gratuity). Single menu items can also be purchased a la carte at the bar. Reservations for Chef Janos' NYE dinner can be made by calling 623-7700.

You don't have to spend New Year's Eve making a bunch of new drunken regrets. Maybe you should just play it safe and see a screening of "Princess Bride" at The Loft. With light hors d'oeuvres like princess peanut butter cups, a quote contest, and a costume contest, you can indulge in some more wholesome fun than the other raucous party spots in town. Ten Dollars gets you in to all the sweetly romantic, harrowingly action-packed cinematic entertainment.

The event begins at 11 p.m. and you can get your tickets by visiting Theloftcinema.com or calling 795-0844.

Sure, spending New Year's Eve seeing LCD Soundsystem would be a blast, but they broke up—get over it. You can catch the next best thing at Flycatcher when TFA Soundsystem takes the stage. Indoor and outdoor stages at the event will also feature DJs Herm, Bob Felix, B-Rad, Danh, and more. Limited advance presale via Ticketfly.com will get you in for just $5 or you can pay $10 at the door. This event, dubbed the Double Fantasy, has everything: an "extreme balloon drop," an "obligatory champagne toast," and a "super awesome time." Warning: there might be fireworks.

If laughs are what you seek this New Year's Eve, you can combine dinner, a champagne toast, and a comedy show all into one stop at Laff's Comedy Caffe. Ron Feingold is performing two sets, one at 7 p.m. and one at 10:30 p.m., and the last one comes with champagne. For $27.50 plus tax and gratuity, you get the show; the bubbly; and your choice of sirloin beef tips, chicken breast served "Francaise," or salmon to eat. Book your spot online at Laffstucson.com before seats sell out. 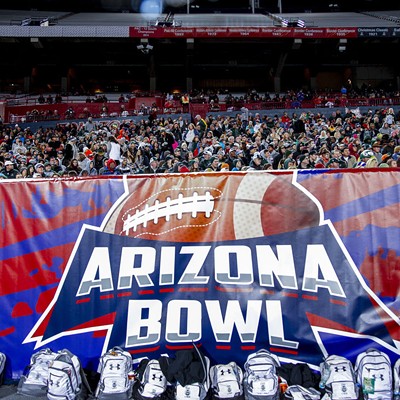