If you are a Broadway musical geek—and really, who among us isn't?—you already know that Meredith Willson's The Music Man opened in New York this month 61 years ago; that it won the Tony for Best Musical over West Side Story, which was also in the running; ran for 1,375 performances; and that the word "Shipoopi," which is also the title of a song in the show, was invented by Willson, who used it to signify a woman who wouldn't gift her paramour with a kiss until the third date.

I knew you would know.

Most importantly you need to know that Arizona Theatre Company has devised a terrifically entertaining production of the show that runs through the end of the month.

Today we're all too familiar with the concept of con men, those artists of manipulation like Willson's Professor Harold Hill. But there's a big difference between Con-in-Chief and Professor Hill: Con-in-Chief doesn't know the territory. He's used to golden elevators and trophy wives, while Hill gets the lay of the land quite well. 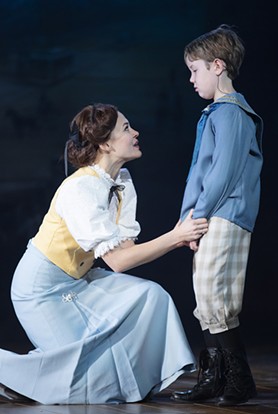 That land is River City, Iowa, in 1912. It's about as American as apple—well, you know. It's a small town set in its small ways and led by men with narrow minds. But the Professor (Bill English) shows up thinking he can run a game by promising he'll develop a marching band out of the lads of the town, complete with fancy uniforms and shiny instruments. He, of course, has no intention of following through with the plan. He knows nothing at all about music, but he will collect the money it would take to acquire all those things and skip town, leaving the townsfolk with no band and deviled egg on their faces. This is what con men are really good at, making promises and then bilking the bozos who fall for their act.

But Hill runs into a problem. It's in the form of a woman, of course, as so many problems are. Here, although she is a woman, she is an educated one, and that just about always means trouble. Although the linguistically challenged Mayor Shinn (Danny Scheie, with great restraint that makes his character even funnier than written) demands that Professor Hill's background be checked before money exchanges hands, and Marian (Manna Nichols), the librarian, has the skills to do such, she decides not to spill the beans about Hill when she discovers he's a con. The reason? Aw, you thought it's because she has a crush on him. But nope. It's that she has observed the changes in the townsfolk since Hill has given them something to hope for and dream about, and she knows that when that happens, all manner of new and good things is possible.

Director David Ivers has taken on this behemoth production with skill and an evident but unobtrusive sense of personal passion for the piece. There's no trying to deconstruct the mid-century musical about a simpler time and place to make it relevant for today. That's a good thing, because it already is. What he has done is gather a skilled (and very large) cast, designers who know what they're doing, musicians who take expertly to the big brash band of a score and a choreographer (Jaclyn Miller) who can make passengers bouncing in their seats on a train a dance and can create a stunning ballet with library visitors. It's a huge production in every way, and it comes alive on the strength of Willson's work, purely but not at alxl simply. We leave sated and a bit weary—this two-and-a-half-hour show grabs us from the get-go and doesn't let us rest for but a few ticks at intermission. The company has worked hard and so have we.

Music director Gregg Coffin and conductor Mike Padilla expertly bring us Willson's music, which is more complex than you might think. We recognize so much of it—"Ya Got Trouble," "Goodnight, My Someone," "Seventy-Six Trombones," "Till There was You"—all of which have insinuated themselves into our cultural zeitgeist. There are several counterpoint numbers, featuring songs with different lyrics and melodies that are designed to be sung together. And of course being a theater geek, you already know that "Goodnight, My Someone" and "Seventy-Six Trombones" share the same tune, but in differing rhythmic time. 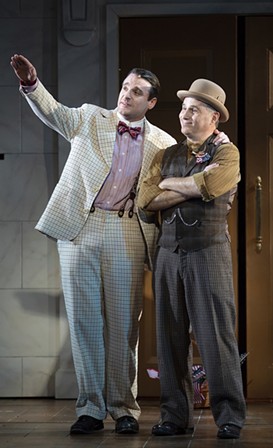 The lead players are universally solid. English delivers Professor Hill with great charm, and Nichols give us a Marian who's strong and smart and tender. Peggy O'Connell, Marian's mother, is a delight, and young Nathaniel Wiley shows some impressive pipes as withdrawn, lisping Winthrop, who is transformed by the dreams that Hill is selling.

All wrapped up in this hugely entertaining package is a message or two. The piece not only allows us to observe the power of hope; it also praises the power of music, which coalesces a fractured population and broadens boundaries. And that can change everything.

ATC's The Music Man is truth and beauty and loads of fun, and even if you deny you are a musical geek, I would still bet you'd enjoy the heck out of it.