Heard of new-winery Arizona Hops and Vines? The family-owned operation currently makes a half-dozen varietals at its farm and winery at 3450 Highway 82 in Sonoita. It also has a line of nonalcoholic beverages called the Sober Shack Soda Company. Of all food-and-drink-related things I've come across over the years, this operation stands out for its ample use of kitschy humor and its penchant for blending good times with good wine. It also stands out because we've heard it's one of the only producers of hops in the Tucson area; it could be the only one. With its assortment of farm animals—including a fish named "Bad Fish"—and a steady schedule of tastings and other events, this place is primed to gain a hefty following. There's more at azhopsandvines.com.

Tucson Originals, the local alliance of independently owned and operated restaurants, is about to kick off an annual summer program that offers special meals for a set price of $20. Participating restaurants include Acacia Real Food and Cocktails, Cushing Street Bar and Restaurant, Feast, Jonathan's Cork and many others. Everything from lunches for two to lavish steak dinners are available, and some include a drink or dessert. The specials run from Monday, May 28, through Monday, Sept. 3. Visit www.tucsonoriginals.com for more information.

The folks at Borderlands Brewing Co., 119 E. Toole Ave., have seen a huge response from the community and are planning to increase production. Co-owner Myles Stone said customers who come to the tasting room have been drinking the tanks nearly dry, leaving little to supply the numerous restaurants that want to serve the brewery's artisan suds. The plan is to add new equipment in the coming months.

The bar and lounge Playground, at 278 E. Congress St., has revamped its menu. Small plates of creative snacks are still available, but items such as lobster BLTs; asparagus and prosciutto; and sausage-and-white-bean ragout, plus numerous others, have been added. This place has been keeping things interesting with various events and good drinks at cheap prices since opening in January. The most recent addition is Bad Movie Nights every Monday in the Bar Cinema, the outdoor area with swanky furniture and giant video screens. Visit playgroundtucson.com for more info. 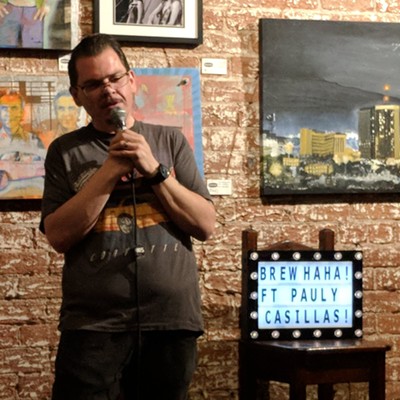 Latest in Noshing Around