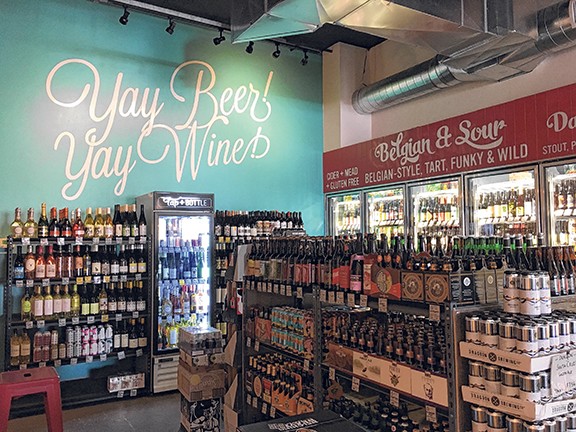 Tirion Morris
Tap & Bottle North recently opened its doors and has already found quite a few beer and wine lovers to supply on the north side of town.

Courtesy
Every Tuesday, at both T&B locations, bike or walk and get $1 off any draft beer or wine.

Open for roughly two months, Tap & Bottle's new location is busy serving up beer and wine to the north side of Tucson, hosting fun events and growing its ever-changing selection of both taps and bottles.

"Our customers downtown would always comment that they live on this side of town," Scott said, "There was nothing up here that's quite like what we are doing down on Sixth and Seventh Street."

Comments like these, along with constant requests to rent out the space, lead the Saffords to look toward expansion. The couple opened the first Tap & Bottle downtown in June 2013 and initially planned to expand to a location west of Congress Street. After the new project was continuously delayed, they decided to look at spaces on the north side of town. The Saffords first viewed their new spot last November, signed the lease in December and opened the doors this July.

"It was pretty quick," Scott said. "Fridays are our busiest days, and we are hoping football will bring in more people."

The addition of the televisions allows customers to enjoy a game, whether it is NFL football or UA basketball, without the atmosphere of a loud, rowdy sports bar.

"This is going to be a craft beer bar that has the game that you want to watch on, so you don't have to go somewhere else and drink crappy beer just to watch the game," Scott said.

While the selection of bottles and cans for takeout is very similar to the downtown location, allowing for local customers to get the beer and wines that they love, the on-tap selection has grown substantially at the new location. There have been 10 beers added, for a total of 30 options, and two wines for a total of eight options. The options are constantly changing, both with the seasons and with breweries coming out with new beer and wine options.

"If I have a few days off it's a little bit of an adjustment to come back and see all of the new stuff," said Lauren Kirin, a bartender at the new location. "There's usually a handful of new beers."

The large selection ensures that there will be something for everyone who comes in. The bartenders try all of the new selections, and are very knowledgeable as to what is on tap, making Tap & Bottle very welcoming to both beer connoisseurs and newcomers to the craft brew world.

"There are people that come in who already know what they are looking for, so we can sit and talk about the different craft breweries and what breweries we've been to and things like that, which is awesome," Kirin said. "But you also get people who come in and are looking for the mainstream stuff, and it's really cool that we can turn them on to something new. Sometimes, they even like it better than what they were looking for."

Located in between residential neighborhoods but still close to downtown, there is a wide range of customers that come in, and the new location is working out how to make sure all tastes are accommodated. Hoping to continue to evolve and fit the community, the Saffords are testing out hours to see what works best.

"We do stay open until 11 p.m. or midnight, which is pretty late for this side of town, so we are trying to develop a little bit of 'in-the-street' crowd, when people get off work and want to grab a beer," Scott said. "Most of the restaurants up here close at about 9 or 10 p.m., so we are hoping to get that late night crowd."

They also plan to use the indoor-outdoor space more as the months get cooler. Outside on the patio, the beer garden is ready to go with giant Jenga, cornhole and an outdoor bar.

While two Tap & Bottle locations will have to be enough for now, the Saffords have plans in the works for a new concept west of Congress called Westbound.

"We are going to have spirits, a little bit of cocktails and some whiskey," Scott said.

The new name is because of the addition of hard liquor, but the concepts are very similar, Scott explained. There will be an option to sit in or carry out and a focus on outdoor seating to make the most of Tucson's warm evenings. There is no hard deadline for the new space yet, but Scott hopes to open Westbound by the first of the year.