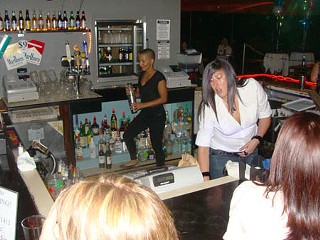 The more Robin Muller thinks about her nightclub getting red-tagged twice since May, the angrier she gets, as she wonders how the city can allow a policy—originally developed to discourage rowdy college parties—to affect a 15-year-old business based on the complaints of one person.

Muller and Lisa Oberstar are co-owners of Ain't Nobody's Bizness, aka The Biz, a lesbian nightclub on Broadway Boulevard just west of Country Club Road, in the same shopping center as Laffs Comedy Caffé. They claim that during the club's 15-year history, including the three years they've owned it, they'd never heard complaints before.

That changed on May 1, when the nightclub got its first red tag.

In reaction, Oberstar says, they went to great lengths to keep noise down. They modified a back patio built for smokers in January 2007. They say the porch originally cost them about $20,000, and additional modifications—including a sound barrier that can be opened or shut, depending on the crowd—cost more than $10,000. A set of speakers on the patio were disconnected about a year before, too.

Muller says The Biz suffered a 40 percent decrease in sales during the week following the first red tag.

"People thought we had closed. Rumors," she says.

Despite the modifications and changes to keep noise down, neighbor Ann Kipnis—who made the call that resulted in the first red tag—called TPD again, on Nov. 5. According to the police report, there were about 25 people in the nightclub, and the manager voluntarily closed the bar.

Meco Wade, who was in her second week as a manager at the bar, says there were closer to 10 or 12 people inside the nightclub. She also says she didn't voluntarily close the bar, but was told by the officer to get everyone out; she says the officer even checked the back patio to make sure the place was empty before Wade locked the doors.

"They made sure we closed the bar that night before 11 (p.m.)," Wade recalls.

Wade says she takes the blame for the second red tag; she knew the nightclub had been red-tagged in May, but didn't know about the precautions to keep noise levels down, including the sound barrier.

However, Muller says she wonders why the second red tag was necessary.

"Why couldn't the police officer just ask us to shut the door? Or why couldn't (the neighbor) call and let us know that we were too noisy for her that night?" Muller asks. "We've been doing what we need to do to be good neighbors. I even left a note at (Ann Kipnis') door with our contact information, asking her to call us if there were any problems. Why didn't she call us?"

Any speculation that this is an attempt to pick on a gay bar is untrue, according to Kipnis and her husband, Theo.

While Oberstar and Muller suspected that Kipnis might be new to the neighborhood, Kipnis says she and her husband bought their house back in 2002. They never had a problem with the nightclub before; they'd even open their windows to listen to the karaoke, she says.

"Before we bought our house, we went by there at night to see if we'd have problems with noise from the bar, but we didn't," Kipnis says.

That changed, however, when a voter-approved state smoking ban in restaurants and bars went into effect in 2007, and the nightclub built a patio to accommodate smokers.

Kipnis says the real problem is that the noise started to wake up her 8-year-old son.

"The second time I called, when they were red-tagged again, it was as loud as I've heard it in months. I even kind of laughed, because someone was singing 'Bohemian Rhapsody.' I really love that song. And you know, I really like the bar," she says.

In an e-mail to the Weekly, Theo Kipnis wrote: "The neighborhood we live in is chosen by people who want to be part of Tucson's local and urban culture. ... The Biz is part of our local culture of small businesses, and we like it. When The Biz has sent advance notice of likely noise from upcoming events, we've had no complaint. But now there are times we can't sleep, and the bar's staff and ownership don't seem to care. Our only recourse has been TPD, and they've been helpful."

While Ann Kipnis has been listed as the only complainant on the red-tag police reports, she and her husband say they aren't the only neighbors who have concerns regarding the noise from the nightclub.

Bob Tracy, a member of the Broadmoor-Broadway Village Neighborhood Association board, confirmed this fact. He says numerous neighbors have shared concerns regarding the noise.

"The issue with The Biz is that before the red tag, the noise was too loud," Tracy says.

The hearing for the second red tag is scheduled for Dec. 8 in Tucson City Court. If the judge doesn't dismiss the case, Muller says, the red tag will stay on the door of the nightclub for six months. If there is another violation in that time, the bar will be fined $1,500.

Muller and Oberstar say they've thought a lot about Woody's, a gay bar on Oracle Road that dealt with its own red-tag issues last year after an apartment-complex manager complained about noise, even though tenants reportedly never complained. (See "Red-Tagged," Currents, Dec. 18, 2008.)

"Are we (gay bars) being singled out?" Muller wonders. "I can't help but wonder if that's true."

As of our press deadline, the Tucson Police Department had not returned calls asking for information on how many red tags have been issued to bars within the year.

"We're not your typical nightclub owners," Muller says. "We're homebodies. ... We still have to pay the bills, and every time we get red-tagged, we lose money."

Things To Buy for Those Parents You Don't Like Very Much