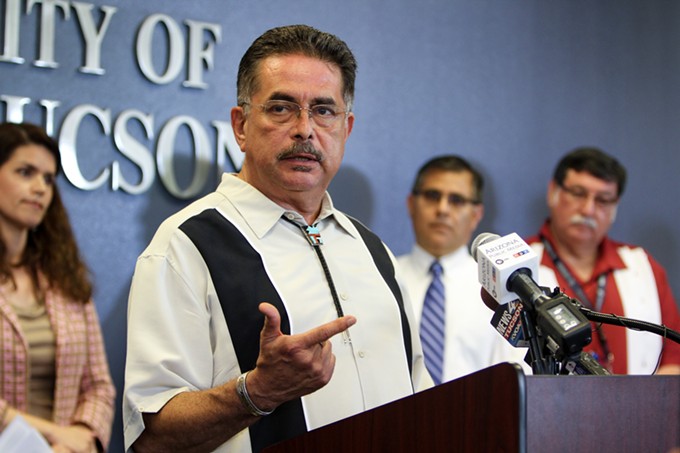 Logan Burtch-Buus
District 5 Supervisor Richard Elías speaks at a June 6 press conference, announcing the joint resolution to oppose the “abomination that is the border wall” and stand together with the people of the region.

Few places in the country interact with Mexico as much as Southern Arizona, and several of the region's jurisdictions have taken a collective stand against President Donald Trump's proposed border wall expansion along the nation's southern border. Following the lead of the Tohono O'odham Legislative Council and the National Congress of American Indians, both the Pima County Board of Supervisors and the Tucson City Council approved a joint resolution standing in opposition to the border wall on Tuesday, June 6.

Unanimously approved by the Tucson City Council and approved by a 3-2 vote by the county board (Republican Supervisors Ally Miller and Steve Christy were opposed), the resolutions state—among other things—that the proposed wall construction stands against the core values of "inclusiveness and tolerance" of the nation and will cause "substantial environmental damage" to the region.

District 5 Supervisor Richard Elías, who along with Tucson Councilwoman Regina Romero was the prime sponsor of the joint resolutions, said the day was about standing together with the people of the region to object to the "abomination that is the border wall."

"We continue to understand the borderlands because we have lived here all our lives and know this border wall is in opposition to our values," Elías said. "We know that the border wall is in opposition to what we share in terms of the business that we conduct. We know that the environmental damage that is going to be done to wildlife, to the fauna, to the beautiful Sonoran Desert that we all share ... We have to be the stewards that protect it."

Both the county and the city have denounced Executive Order 13767, which aims to construct an expanded border wall, and the county's resolution also calls for a "thorough and comprehensive analysis of the cost, effectiveness, necessity and consequences of a U.S. border-security policy and this Executive Order."

The city's resolution takes it several steps further, calling for the billions of dollars potentially allocated to construction to be instead spent on health care, education, housing, infrastructure repair, alleviating poverty, increasing economic opportunity and "safeguarding the health and well-being of all Americans." The council resolution also states that the current wall has caused "substantial" environmental damage, and is "an offensive and damaging symbol of fear and division."

In passing its resolution, Tucson also calls for a cost-benefit analysis, stands in opposition of "continuing expenditure of federal funding directed to private, for-profit prisons for the detention and incarceration of immigrants."

Most controversial, and drawing immediate criticism from local chambers of commerce, was the city's inclusion of a section which allows the council to identify companies involved in designing, building and financing border-wall construction, and divest from each, as the law allows.

Tucson Metro Chamber President and CEO Mike Varney told the mayor and council in a letter that the chamber and "the business community as a whole" are opposed to the divestiture.

"Many local companies (including many small businesses) compete for and frequently win government contracts," Varney wrote. "The notion of penalizing any business that may be awarded a contract to work on a component of the proposed border wall or any other lawful project or assignment is extreme and punitive."

Varney said the council should focus on the issue of the propriety of the border wall and make whatever statement it chooses to make on the proposed construction of that wall. He said the city does not have to include punitive measures "that will only damage local companies in order to make that statement."

Tucson Hispanic Chamber of Commerce President and CEO Lea Márquez Peterson told the council in a letter that the chamber is also worried about the "cost and effectiveness and potential relationship-damaging" consequences of expanding the border wall, though she expressed concern regarding the council's "punitive tone" in dealing with local businesses.

"We have many members of our chamber and in our business community who currently work on federal procurement contracts," Márquez wrote. "The tone of this resolution creates an assumption that if they were to create a component part, advise on design or provide technical skills or labor to build the wall, they would not be able to receive future city procurement contracts."

Though there are members of the community standing in support of the wall's construction, Tohono O'odham Nation Vice-Chairman Verlon Jose said it was important to know that there are communities standing together in opposition.

Supervisors Christy and Miller did not return calls for comment.