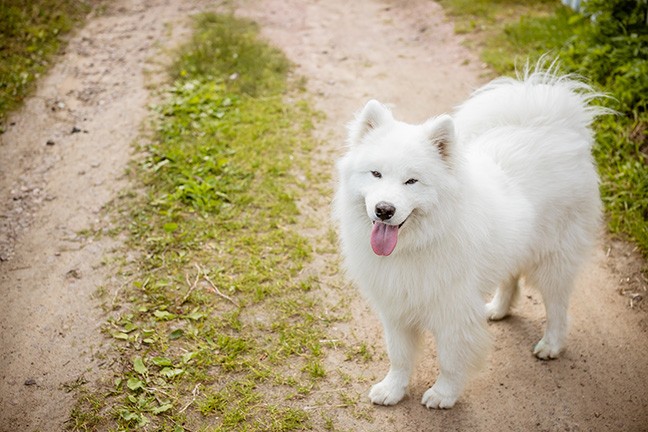 BigStock
The Stantons kept seven Samoyeds at their home

For months, David Raffety could rarely go a few days without barking dogs waking him up at two or three in the morning. If he was lucky, the sound would only last a few minutes, though there were nights when the howls could go on for close to an hour.

Sometimes Raffety and his wife moved to a different part of the house to get away from the noise. Sometimes, they didn't sleep at all.

While living in the Sonoran Desert brings with it some proximity to howling coyotes, the Raffetys—and many of their neighbors—were subject to the barking of a pack of dogs owned by Victor and Cecile Stanton, whose failure to control their dogs led the Oro Valley Town Council to pass a new ordinance to deal with the problem of loud pets that disturb the peace.

Raffety recalled the barking in his neighborhood became a problem back in early 2017. Morning, midday or night, Raffety said he could hear sometimes constant barking of the dogs coming from a home down the way from his Rancho Vistoso backyard.

Raffety said he first turned to his homeowner association, though he was skeptical that warning letters were likely to solve the problem. Since it seemed unlikely he would find any peace, Raffety decided to contact the Oro Valley Police Department.

According to OVPD reports, officers were at the Stanton residence more than 60 times between July 2017 and February 2018. Over that period, more than 20 different officers logged more than 19 hours either sitting in their patrol vehicle or standing near the home, listening for the sound of barking dogs.

While the police did not hear barking every time they were at the home, two neighbors (including Raffety) filled barking dog complaint logs that included more than 150 alleged incidents ranging from 10 minutes to three hours in a period just longer than a month in late 2017.

In August 2017, OVPD Chief Daniel Sharp wrote a letter to Stanton to notify him that the department was aware of an ongoing issue regarding barking dogs. Sharp warned that officers would cite any violations of excessive noise they witnessed within a two-week window, resulting in a $250 civil fine.

Despite Victor Stanton receiving four citations for excessive noise in under a month between September and October 2017, Raffety said the problem only got worse.

Stanton declined to comment, though his attorney, Natasha Wrae, said it seemed like people's emotions were getting the best of them by the time the police became involved—and that the local community stopped being "good neighbors."

"The Stantons felt like they were being conspired against, even believing that the officers were somehow involved," Wrae said.

While the neighbors may have thought their complaints were being ignored, Wrae said the Stantons were doing all they could to control the noise, including using anti-barking collars and bringing the dogs in at night.

"It wasn't for lack of the Stantons trying to find some way to help resolve the problem," she said. "The neighbors were absolutely against, I don't know how else to say it, against any sort of solution that the Stantons could come to the table with to try and fix the problem. They didn't want to hear it."

Wrae added that while it may seem counterintuitive, Stanton believed his early morning feedings would help keep his dogs quiet if they were provoked by something in the night.

Assistant Town Prosecutor Troy A. Simon filed a request for release conditions Nov. 2, 2017, that no dogs be allowed on the property through the outcome of the trial.

Conditions weren't set until Feb. 16, 2018. During those months, Raffety said he and his neighbors were subjected to more barking. As part of those conditions, the dogs could not be fed or groomed outside, and could not be let out between 9 p.m. and 7 a.m. Eventually, the dogs were also limited to going outside twice a day for 10 minutes at a time, and were to be supervised.

According to court documents, the Stantons—who are dog breeders—kept seven Samoyeds at their home. Three older dogs lived inside, while four adolescents lived outside in eight-by-ten-foot cages in the backyard. Records indicate that the younger dogs were the cause of the noise problem, and were boarded March 9, 2018 through the outcome of the trial.

"By any standard, the noise is unreasonable," Judge Berry wrote in her trial ruling. "It is not the type of momentary and intermittent barking of a dog due to some stimulus which quickly passes. Rather, the noise is in lengthy segments of time involving multiple Stanton dogs at all hours of day and night."

Sentencing came more than a week later, and Stanton was handed 180 days of jail time suspended for three years of unsupervised probation and a $538 fine. In the terms of his probation, Stanton cannot allow excessive barking, and the four juvenile dogs sent off to compete as show dogs are not allowed to return to the home.

While he did ultimately find some peace through the justice system, Raffety said he believed more could be done to prevent other Oro Valley residents from experiencing the same kind of disruption he and his neighbors endured for months.

Last summer, Raffety said he approached Oro Valley Councilmember Bill Rodman to share his story and see what could change in the town's code.

Rodman, who said he's a friend of Raffety, assumed early on that with OVPD involved, the problem would soon be resolved. As the case progressed to court, Rodman was surprised to see the problem dragging on, so he spoke with OV Legal Services Director Tobin Sidles about updating town code.

"Nothing like this should be able to go on for as many months as it did, involving and disturbing so many neighbors without at least looking at what our ordinances were," Rodman said. "Was there something we should be doing to put some teeth into it to bring these things to a resolution sooner? Because the more I heard about it, the more I thought, 'This just can't be.'"

At the request of councilmembers Rodman and Rhonda Piña, Oro Valley legal services undertook a review of the town's animal control code regarding excessive animal noise. That review ultimately led to a set of proposed changes passed by the town council on Feb. 20.

Included in those changes is a fine of up to $2,500, up to six months in jail or three years probation. Repeat violations now results in a criminal charge.

Though his troubles were settled nearly a year earlier, Raffety said he's pleased town staff and council recognized the nightmarish problem he and his neighbors faced.

"This was an incredible waste of resources to address a situation like this," Rafferty said. "Part of the change in the statutes is to not waste as much resources on a problem like this so you can get to some relief for the neighbors quicker in the process."