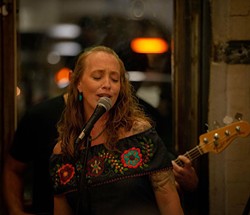 Courtesy
Miss Olivia and the Interlopers

Miss Olivia & the Interlopers. Ain't no doubt Miss Olivia Reardon's got skills. Watch her waifish form sidle to the mic, hear dusty blue-eyed soul, belted yet nuanced, studied yet organic, and goddamn straight at the heart. After years of kicking around her native Ohio, then L. A., now Tucson, she has unearthed a band with enough chutzpah to both compliment and contest her dynamic range, and it's more tremor than earthquake, also the precise sound of band and singer finding each other. The airy and boisterous guitars, bass, sax/keyboards and jazzy-cool drums (like Elvin Jones weaned on Questlove and hip hop. Seriously). Capable of tight, straight-ahead covers (Erykah Badu's "Tyrone") or psych jam-outs, a signature of the band's live shows, Miss Olivia and the Interlopers wistfully channel both Dusty and Stevie, Bettye LaVette and old Allman Bros. How cosmic! (Voted runner up to Calexico as Tucson Weekly's Best Band of 2018, this band is cutting their first record together right now.) With Miller's Planet on Saturday, Feb. 2. 191 Toole. Doors at 7 p.m. Free. 21+. —BS Eliot 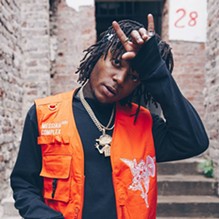 J.I.D. Growing up whip smart and poor made J.I.D. creative and resourceful. To quick flow mix up. To mash together funk and soul with Bollywood flair. To pay little attention to rules and transcend limitations. The resulting hip hop is fresh and deconstructed and, um, dangerous. (Yes, we know, dangerous doesn't exist amymore.) This Atlanta kid grew up on Mobb Deep and Wu-Tang, and J.I.D. too has a crew, Spillage Village (alongside 6LACK). Like Wu, his dystopic visions are darkly comic and fully realized. His high-pitched nasal flow enlists hyper-complex internal rhyme schemes and hypnotic repetition to assert and deconstruct at once, a cut and pasted ransom note atop warped sitars and descending piano scales. The effect is disorienting and utterly original. As J.I.D. guides us through his "getonmy dick/cannabis spliff"-enhanced world, that old-fashioned "I feel cool as shit bumping this" vibe is attained. Hell yeah, hip hop doesn't just survive, it thrives in J.I.D.'s jittery, capable hands. J.I.D., with Reason, Hardo, and Lou the Human on Thursday, Jan. 31. 191 Toole. Doors at 7 p.m. $20-$25. All ages. —BS Eliot

Grivo. Austin's Grivo don't just create the old wall of sonic spray, but shape-shift musical matter, forming abstract MC Escher drawings in the minds of intent listeners. Continuing and expanding upon Terry Riley's A Rainbow in Curved Air with a heavy injection of shoegaze melancholy, Grivo combines slow, melodic hooks with grinding doom-metal bass lines, which result in abstract forms that reflect technology-driven loneliness. Heavy but warm, their debut album Elude manages to evoke malaise without alienating the listener. Instead, we are drawn into the "Cave" with the players, deprived of all senses but their minor, downtempo dirges. Because the band's core is two brothers raised on jazz guitar and drums, the five-minute-plus songs on Elude are shot through with a dynamic interplay between rhythm and melody, allowing for builds and dissolves often missing in this droning, expansive genre. This music for sad smart folk with not much lift, who long to close the gap between existential isolation and deep human connection. Grivo, with Mute Swans and Moontraxx, on Friday, Feb. 1. Club Congress, 311 East Congress St. 8 p.m. 21+. —BS Eliot