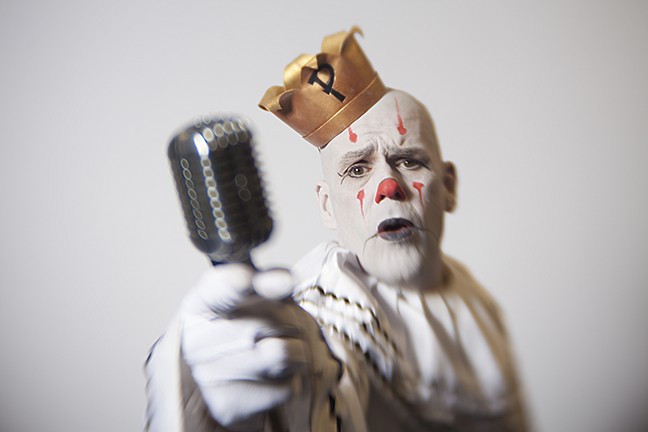 Puddles Pity Party. The kickass-monikered Puddles Pity Party (aka Mike Geier) is as thought-provoking as he is skilled. "The sad clown with the golden voice" is how the world knows him after 2017's America's Got Talent. Though dude mostly sings covers, he's mum between tunes. Turns out a silent, sad character wins mad sympathy, especially in TV judges. Once the crowd is rapt, Puddles EMO's his way through well-chosen ditties like "Losing My Religion" and "Royals" in a way that's deeply sincere, in a croon timber that'd do Scott Walker proud. (Yes, Scott Walker.) It is also riotously funny. Taking cues from drag queen lip syncs, Puddles croons up disparate mash-ups (dig it: Celine Dion/Metallica, Adele/ELO), which highlight the sadness versus anger with which women and men experience heartbreak. Puddles fluidly glides between the two, non-binary in emotion and gender at once. Friday, Oct. 19. Rialto Theatre, 318 E. Congress St. Doors at 7 p.m., show at 8 p.m. $35-$105. All ages. —B.S. Elliot

Lil Uzi Vert (LUV) rap-sings emotive, streetwise patois that's vocoded for the trap gen. Short lines, tight rhyme schemes have him 'fessing 'bout his busted heart again. Sure, he might drop a couple "bitches," claim "her big ass is a miracle," but deep down LUV's hurtin'. Really, he's a sensitive dude—popping pills just to be OK, wishing he'd never met her, because it hurts when she's gone. Hailing from Philly, LUV is best known for his collabo with Gucci Mane and his big heart. After friend Lil' Peep OD'd, he publicly got sober.After friend XXXTentacion got shot, he helped build a foundation against gun violence. This is vulnerability ahead of street cred, and LUV leads by example towards a better, less angry and alienated world. Saturday, Oct. 20, TCC Exhibition Hall, 260 S. Church Ave. 9 p.m. $55-$95. All ages. —B.S. Elliot

Jesse & Joy might be as famous as Lady Antebellum, if they only sang in English. Then again, it's Joy's clear, resonant belt (almost as strong as Gaga's) that rescues this country-pop duo from brain-dead generica. Not only does Spanish lend itself to more complex internal rhyme schemes, "Todo mi cuerpo te extraña" (all of my body misses you), it can sustain stronger emotional weight without seeming cheesy. (In the English re-tooling of the same song, Joy sings, "I smell your skin on my pillow" instead.) And while J&J's power ballads cover well-tread ground—stay with me, I'm leaving, don't say that—their sibling chemistry keeps even the most typical love tune somehow vibrant. This bro/sis combo's total commitment to love only feels creepy when they play amantes in their music videos, which are hugely popular, glossy telenovela style. Still, their platonic love echoes throughout, and it's easy to believe that they are in fact one another's poetry. With Making Movies on Thursday, Oct. 25. 191 Toole. Doors at 8 p.m. $35-$100. All ages. —B.S. Elliot

Reverend Peyton is a raucous, rural Indiana legend. A wizard of backwoods country blues, he can play 18 instruments—and absolutely anything with strings, including cigar boxes and shotguns. When he tilts his head back, a guttural gospel pours forth, peppered with plenty of hillfolk spice. But like Dr. John, he never slips into parody—the dirty authenticity is more scary than campy. Now add his wife, Breezy, who plays washboard with the nuance and power of a New Orleans drum line and the lean drumming of Max Senteney, who keeps time atop a five-gallon maple syrup bucket, and little else is necessary. With their brassy humdinger romps and foot-stomping barnburners, the trio indeed rocks it like a big damn band. While Peyton sites Mississippi John Hurt as his inspiration, his behind-the-head showmanship rivals, yes, ZZ Top. With Tom Walbank on Sunday, October 21. Club Congress, 311 Congress St. Doors at 7 p.m. Free. —B.S. Elliot