Ohmme is a smart band penning real songs. Both partners in this Chicago-based female duo are classically trained pianists who opted to play guitars in Ohmme as a self-imposed creative limitation. Their fully ingested musical theory and its resulting command of the circle of fifths permeates the deceptively basic fabric of Ohmme's music—percussive, often mono-note guitars (sounds like Wire!), held down by snare-driven pocket beats. (Dear God, will "Icon" get under your skin and live there for weeks and weeks.) Through circular, perfectly-pitched harmonies, Macie Steward and Sima Cunningham deliver nuanced lyrics that work on visceral and cerebral levels, "Like ladies in a French museum/Taxidermied humans, you really ought to see them." Their vocals, breathy but matter-of-fact, like an old-time radio program, strike warm contrast to the post-modern minimalist backing. Literate and symbolically aware, they eat peaches then apples before switching over to tangerines because, they purr, in the end, "It's all just food." With Mute Swan and Citrus Clouds. Monday, Sept. 10. Club Congress, 311 East Congress Street. Doors at 7 p.m. $5. 16+. —B.S. Eliot 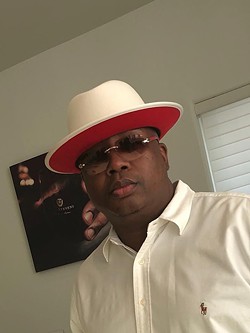 E-40: E-40's career reads like a hip-hop encyclopedia. From 1986 to present, he has repped Oakland, founding Sick Wid' It Records and spinning on the E-Feezy radio show, showcasing the flamboyant East Bay scene and cementing its place in the hip-hop pantheon. On the mic, E is hilarious and oh-so-capable of switching game mid-flow. His real "genius" might be his business acumen (self-branding early with the legendary 40 Water) or the choice to be his own hype man. E-40 has underground cred for days, guesting even on the illusive DJ Shadow's new record. Yet his commercial whip appeal earned him mad streams and hits and Lil Jon production. From Too Short to Snoop Dogg to the Game to Vince Staples, E never lets his career get crusty. With brains and panache, E-40 has managed a lifelong career in rap's often sordid and bullet-riddled history. With OMB Peezy and Nef the Pharaoh on Wednesday, Sept. 12. Rialto Theatre, 318 E. Congress St. Doors at 7 p.m. $25-$20. All ages. —B.S. Eliot

Acorn Bcorn (AB) may be Tucsonans, but they kick it like hillbilly riot grrls. These storming sisters are Slater Kinney meets Stripes-era Jack White with their chortle-belted vocals, heavy spare guitars, bass, and drums. And they trade off, sharing everything as only sisters can, using both hands and feet to play multiple instruments at once. AB is a multi-headed hydra—and dudes shouldn't mess. "I like everything about you/Except how you live your whole life." With their latest EP, Ladies in Waiting, the dynamic duo demonstrates just what they are doing in lieu of said "wait"—they are raising self-empowered, musical Cain. Already Tucson rock venue vets from their days in The Beta Sweat, the Cornelius sibs are known for their live takedowns and onstage synergy—what the hell, they've had a lifetime to perfect it. With Dovi, Cool Funeral, Lano and Feverfew. Saturday, Sept. 8. 191 Toole. Doors at 6, show at 6:30. $7-$10. All ages. —B.S. Eliot