Fantastic Negrito. Surviving hardship makes a smart person kinder. Enter Xavier Dphrepaulezz, who suffered through a tough, impoverished childhood, gunpoint robberies and a car crash that about killed him off. He rose as Fantastic Negrito in 2014 and nabbed a contemporary blues Grammy the next year. And now with Please Don't Be Dead, he's made a genre-defying meditation on overcoming odds—in style. With sizzle guitars and the searching grit of good Chris Cornell, Negrito seeks to "break the chains" of race, religion and gender politics. Later, the sartorially sweet (rising) star channels the controlled tenderness of Jeff Buckley as he sings the blues for pal Cornell, RIP. Each tune could be a single, from the songwriterly execution to the vocal delivery. Entire thing ends with a kickass funk sendup, Parliament-style, "Take that bullshit and turn it into good shit." Negrito closely follows his own wise-beyond-his-years advice. Tuesday, June 26 at Club Congress, 311 East Congress St. Doors at 7:30 p.m. $12-$15. 21+. —B.S. Eliot

Niki J Crawford. With the command of a small-town gospel choir leader and the grace of a woman who's come of age on camera in Black Hollywood, Niki J Crawford has mad capacity for wide appeal. Only the world needs to catch up (and perhaps pen her stronger material). Crawford's band ably backs her with a sunny Caribbean flare, bringing out the cheery hopeful tones of a young Whitney Houston in her voice. But she can go deeper, accessing that scratchy, Macy Gray (or Samantha Fish) age-old pain of loving too much, and too hard. "Don't lose your power/Playin' it down/Never lose faith/Stand your ground." Having so far cameoed with The Roots and at Bonnaroo, she's coming up, hard. She is beautiful and hard-working and well-versed in the BlackExpos and street fests this nation over. Maybe an up-to-the-moment Quincy Jones will step in, someone as versed in songwriting, arranging and soul as they are the gadgetry and gimmick of modern pop stardom. Friday, June 22 at Monterey Court Studio Galleries, 505 W. Miracle Mile. 7 p.m. $10. All ages. —B.S. Eliot 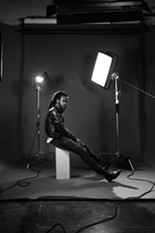 Seanloui could be called the new Seal. Utilizing synths and modern EDM scratches, whirs and sped-up backing vocals, he sings adult contemporary jazz/R&B for the 4 a.m. comedown crowd. And like Sade, too, Loui sounds generic at first, but listen close. His voice floats and lilts atop pulsing backbeats, nuanced and guileless. The songs swell and gently jab in ways that make emotional sense. It's an earned listen because once night falls and fatigue sets in, his can be a warm bubble bath with a lover and a sweet strain of sativa. The subtle charms of his gentility emerge with no irony—words like romantic, chivalrous, tender come to mind. And belying the Trumped-up, polarized era we live in, Loui sings of the bliss of coming home to a woman he actually adores, the joy of quiet evenings, the way shadows climb and curve and gyrate across his mind's eye. His up-to-the-minute production ensures that a whole new generation of listeners can discover the simple pleasure of connecting hearts—the songs sound like creative necessities, not bedroom-studio naval-gazes for self-indulgent brand merchants, like so much pop now. With Jaca Zulu and Taco Sauce the Band on Friday, June 22. Club Congress, 311 East Congress St. Doors at 8 p.m. Free. —B.S. Eliot.