Chow: Next On the Menu

Despite closing his restaurant during the pandemic, acclaimed chef Janos Wilder isn't hanging up his apron just yet 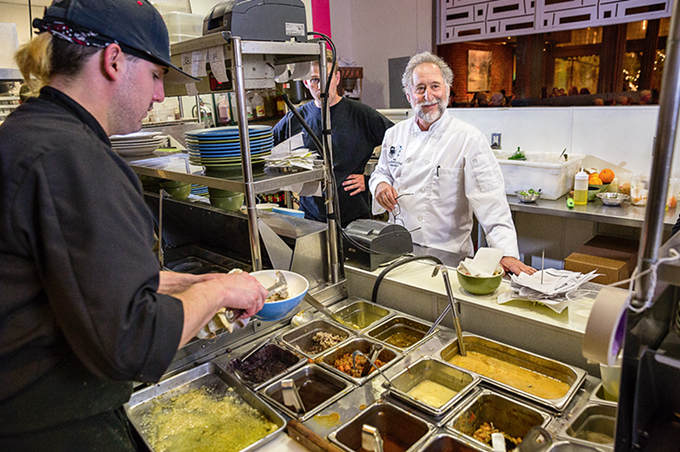 Janos Wilder has no intention of fading away from Tucson's culinary scene—a scene he helped build for nearly 40 years.

"By no means is this the end...it's just the beginning. It's a time for me in my life where this makes sense," Wilder said. "I've been cooking in Tucson for almost 40 years and this isn't the time when I want to be dealing with the rigors of a 70-80 hour work week, seven days a week, as things are uncertain."

Wilder's restaurant is the third downtown culinary hotspot to close this past October, a time when the local service industry typically would be flush with customers. Beloved Cafe Poca Cosa shuttered its eatery on Oct. 15 and Elvira's followed suit less than a week later. Both restaurants cited the economy's downturn during the pandemic as the main factor in their decisions to close.

In Wilder's case, he said he got a better deal which would allow him to focus more on his catering and event space, The Carriage House, which also features a video production studio to produce online cooking classes. His landlord at that location, Ross Rulney, recently purchased the building that houses DOWNTOWN Kitchen+Cocktails from previous owners Tim Fuller and Barbara Grygutis.

Both men decided it was in their best interest to make bold moves as uncertainty looms—Wilder closes his restaurant on Sixth Avenue and focuses on his catering venture one street away on Arizona Avenue and Rulney gives the chef a deal on his rent at that space.

"In terms of making the decision to not renew our lease at DOWNTOWN Kitchen + Cocktails, I'm feeling really positive about it," Wilder said. "I'm at The Carriage House now with a favorable rent structure and he's going to rent that space to someone else it will work for."

Working solely from The Carriage House now gives the chef the freedom to pursue projects he had hoped to do for years, but was unable to as a full-time restaurateur. As president of the Tucson City of Gastronomy Board of Directors and champing at the bit to produce online cooking classes, Wilder said he is ready to begin the next phase of his cooking career.

"I want to focus more attention on those sorts of things that have fallen through the cracks over the years when you work full time at a restaurant," Wilder said. "Best of all, I get to go home for dinner almost every night. I haven't been able to do that in the 40 years I've been married and to have that opportunity is pretty terrific."

The 66-year-old began his culinary career as a teenager at Magoos, a pizza parlor in Menlo Park, Calif. Like many who start down this path, Wilder's interest in food and kitchen work ultimately led to a steady paycheck while pursuing a degree in political science from UC Berkeley.

After graduating, he continued to pursue his passion for cooking throughout the Southwest and France until "falling in love with the flavors of our region" and then settling down in Southern Arizona in 1983. Later that year, the young chef opened his first restaurant, Janos, on the grounds of the Tucson Museum of Art. Long before the Farm to Table movement was even a thing, Wilder was looking for local farmers to grow indigenous produce months before hiring staff.

Wilder said downtown Tucson of the early 1980s was "deep into the process of decay," but he strongly felt he could bring his culinary vision to life and give the Old Pueblo a restaurant on par with any big city—anywhere. His gamble paid off. Within a year, Janos was receiving accolades in the New York Times and was named a top restaurant in the region by Playboy in 1984.

"We opened downtown in spite of it being downtown, not because it was downtown," Wilder said. "Maybe it was a little bit of naivety, but I felt that if you build it, they will come. It really caught the public's imagination locally, nationally and elsewhere."

By the late '90s, his restaurant moved to a location at the Westin La Paloma Resort, where he later opened popular northwest nightspot, J-Bar, inside the establishment. However, Wilder closed his flagship restaurant in 2012, so he could concentrate on his other restaurant, DOWNTOWN Kitchen + Cocktails, which opened two years earlier. At the time, the downtown area was still rough, but earmarked for renovation.

"When we reopened downtown in 2010, the renaissance had not begun but I knew it was coming," Wilder said. "Once the Fourth Avenue underpass was upgraded, I was like, 'Oh my God, they built the Champs-Elysees from University Boulevard to downtown.' Then the streetcar came in and all of that was a step in the right direction."

Wilder admits the economic climate of downtown's culinary community is in a slump, but he strongly believes it will bounce back with new faces and fresh ideas.

"This renaissance that took place is not ending now. There's $300 million worth of projects in downtown Tucson happening today. They're not stopping," Wilder said. "COVID is not going to last forever. It will take a little time and there will be some dislocation and more restaurants are going to close, but others are going to take their place. This could also be an opportunity for others who will have great success moving forward."

Due to an editing error, the phase "champing at the bit" was incorrectly spelled in an earlier version of this article.