Asleep At the Wheel steers into Jazz Fest 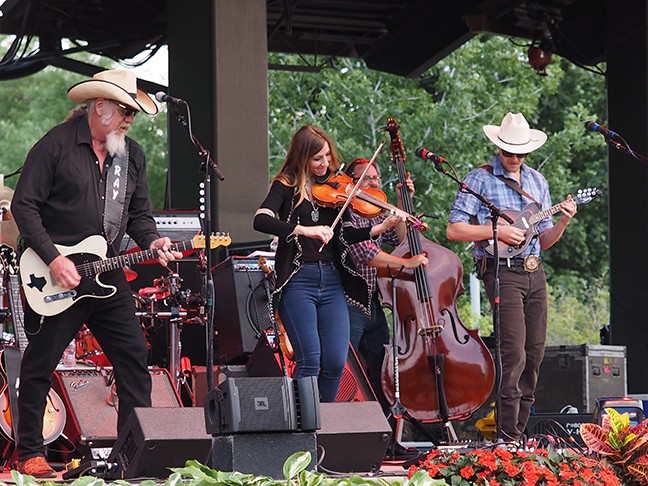 The lineup for the Tucson Jazz Festival this year offers a typically awesome and eclectic range of artists and groups, running the gamut of the jazz universe. Trad, avant garde, jazz-rock—all are represented in some form or another. But there aren't many other bands on the bill like West Virginia western swing troupe Asleep At the Wheel.

Formed in 1970 and led by singer and guitarist Ray Benson, Asleep At the Wheel have won eight Grammys in their 48 years while releasing 25 critically-acclaimed albums and a slew of highly rated singles—"The Letter That Johnny Walker Read" reached number 10 in 1975 and that remains their best chart position.

The lineup of musicians within the Asleep At the Wheel ranks has always been fluid too; by our estimations, 80 people can call themselves "ex-members," and there are eight in the group now. Benson has always been the constant, having formed the band back in '70 with Lucky Oceans. Nearly five decades on, what keeps him at it?

"I like to do it and I have a great new band," Benson said. "Katie is the new vocalist who I share vocal chores with, and that's basically why we keep doing it. I've got new folks who are really into it and I enjoy working with."

He's referring to fiddler and vocalist Katie Shore, who is also an accomplished solo performer. Other recent additions to the Asleep At the Wheel ranks are co-fiddler Dennis Ludiker and pianist Connor Forsyth. Benson believes that the current version of the band stands tall next to previous lineups.

"This lineup is competitive with all of them," Benson said. "People tell me that, it's not just me. Folks are really happy about it. Katie's the new vocalist and fiddler. Dennis is our other fiddler. Connor on the piano is brand new, and they all bring something new to the table."

Shore said that the experience of joining an established country band with a hardcore fanbase has been incredible.

"I grew up listening to them since I was a kid, and now I get to play with Ray," she said. "It's been even better than I'd imagined. So much fun. I've known Connor and Dennis for a really long time and it sorta feels like family on the road. We're having a great time. I love it. It's a dream come true." The journey has been a strangely interesting one for Benson, who has seen the musical landscape and the music industry change beyond all recognition.

"I'll tell you, when I started the band in the '70s, I was 20 years old," the band leader said. "The 20-somethings couldn't play this sort of music. Now, folks like Katie and Connor came up playing this sort of music. So it's really been a whole lot easier and better than it was back in the day. In the '60s, when we were coming up, I could never find a fiddle player that could play this music until much later."

This past summer, the band released New Routes, its first album of new material in a decade. It's a solid effort too, and Benson doesn't believe that it will be so long until the next one.

"I think we've got another one half done but nothing planned as of yet," he said. "We are doing a jazz album for another person. But for Asleep At the Wheel, 2020 is the 50th anniversary so we'll probably do something for then. I always write. So hopefully something will be appropriate."

"When we made this last album that we have out, everybody brought songs to the table—songs that they'd written and cover tunes—and we had a slew of them," adds Shore. "It was hard for Ray to whittle it down to what the record become. But we had a lot of songs. So when Ray said we've got one half in the bag, we just have a lot of material that we really enjoyed recording and playing. The songs that we're currently doing really fit the band. Asleep At the Wheel's got such a huge catalog, it's hard to play every tune."

The challenge for the band is to find a way to fit in with the aforementioned radically-altered music business. Benson is content to find his niche, while admitting that there is still a lot of great music out there.

"There's so many genre lines being blurred these days too," said Shore. "I think 'Americana' is the umbrella word for everything and we feel like we fit into that pretty well, coming from our different backgrounds and where we are now. And where the band has always been."

Asleep At the Wheel plays the Fox Theatre as part of the Tuscon Jazz Festival on Thursday, Jan. 17, and Benson is looking forward to performing in front of a jazz crowd.

"Oh yeah, don't worry about us," he said. "It's not going to be all Hank Williams songs. We'll do some Louis Jordan and a lot of swing music, basically."

Benson also enjoys Tucson, and actually had a band here in the '70s.

"I've been coming to Tucson longer than you have been alive," he said. "I started playing there in the early '70s. Had a lot of good friends. We love it there."

Benson and Shore say that we can expect a fun set of western swing at Jazz Fest—an all-round good time. After that, they head to England for a January tour, and then they'll be back again. As they head towards their 50th anniversary, nothing's gonna slow this band down.