Sean Miller leads the Arizona Wildcats into the unknown 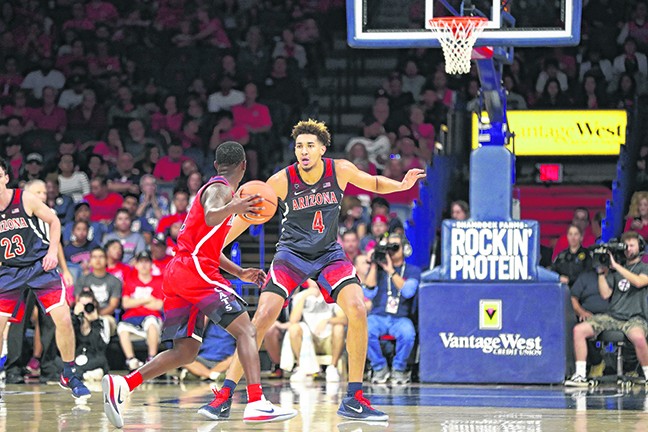 Courtesy
The University of Arizona Wildcats weathered the proverbial storm this offseason, facing a myriad of issues, both on and off the court.

The Wildcats soared to meteoric highs a year ago, posting a 27-8 record while winning the Pac-12 regular season and tournament titles, before crashing to the earth in a 21-point thumping by the University of Buffalo in the first round of the NCAA Tournament.

Their offseason got off to an equally turbulent start, with their three underclassmen starters (Allonzo Trier, Rawle Alkins and Deandre Ayton) declaring for the NBA Draft, while seniors Parker Jackson-Cartwright and Dusan Ristic graduated.

The rest of the team's summer sabbatical was equally turbulent, with Miller's recruiting coup of incoming freshman guard Brandon Williams, as well as class of 2019 five-star guard Nico Mannion, giving his team a confidence boost.

Those positives struggled to outweigh the negative headlines generated by the FBI's investigation into the sport, which included the alleged $15,000 payment by Adidas employee Thomas "TJ" Gassnola to Ayton's family.

There is the ever-present cloud of possible NCAA penalties for the Wildcats and an unknown number of other college programs, in relation to the FBI's investigation.

All of that negativity was washed away, at least temporarily, by the excitement of last Sunday's annual Red-Blue exhibition.

The annual spectacle, which included a wheelchair basketball exhibition, slam dunk contest and 24-minute scrimmage, drew a sellout crowd of 14,655 to the venerable venue.

The scrimmage result, which went in the Red team's favor, was not what mattered most to Miller or his players.

What mattered most to Miller was the trust the team's fans have in his team, despite the recent hiccups that have whirled around the program.

Miller described the annual exhibition as a chance to show off the team's loyal fanbase to prospective recruits, while also giving players a taste of what game days are like in Tucson.

"The difference in McKale is when we're not playing well, when we need the home crowd, they're always there to lift us up," he said. "I think at a lot of places it's not like that, and I think everybody that's a part of our program, this year's team, knows that it's not like that everywhere in college basketball."

Miller discussed a couple of on-court tidbits, including his admiration for junior forward Chase Jeter, who sat out last season after transferring from Duke University.

Jeter excelled in the scrimmage, grabbing 14 rebounds in 21 minutes of action, while scoring nine points on 4-of-7 shooting for the Blue team.

Jeter and University of Pittsburgh grad transfer Ryan Luther excelled on Sunday, with the latter putting up 10 points for the Red team.

Miller praised both men for their on-court acumen, saying that the pair add valuable experience to a youthful squad.

Miller believes that each player will see exponential growth in their game this season, which could be the difference for a squad that lacks the type of depth that Miller's teams have featured in years past.

"Sometimes the most significant jump a college basketball player makes is in between his freshman and his sophomore seasons," he said. "Especially if they have a bigger role in their second year. All of those guys have a bigger role awaiting them, and they've worked very hard. We expect them to all be much improved from where they were a year ago."

Luther, who averaged 12.7 points and 10.1 rebounds per game last season with the Panthers, believes that this year's team, which was picked to finish fourth in the media's preseason conference poll, will surprise people.

The fifth-year player believes that both he and Jeter have the right mixture of on-court experience and maturity to lead the team forward this season.

"Obviously, we have a lot of new guys, a big sophomore class and some good young guys, but really just try to lead by example and just play my game," he said. "Don't do anything that I can't do, just play within myself and be aggressive for my teammates."

Williams, who was a four-star recruit out of Crespi High School in Encino, California, said that Sunday's exhibition was a dream come true.

Williams and company start their regular season at 7 p.m. Wednesday, Nov. 7, against Houston Baptist, putting what they've learned in practice and in Sunday's exhibition to good use.

"One thing you want to see is, who's nervous, who isn't, who's going to deviate from what we do every day in practice because of crowds at the game," Miller said. "We really didn't have any of that going on today. Once in a while that happens. You want to get through a game like this without injuries. You want to see the things you work on every day show up, and although we were far from perfect, it was a great experience for our players."