The tension was thick between candidates Matt Heinz and Ann Kirkpatrick at last week's Congressional District 2 Democratic primary forum. The animosity between the two candidates widely considered to be the front runners popped up repeatedly while all six candidates on stage debated a host of issues. 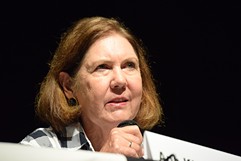 Heinz's attack ads accuse Kirkpatrick of not having "progressive values" for a number of reasons. One, which persisted at the debate, was her checkered past on supporting or opposing gun-control legislation.

A 2009 article in the White Mountain Independent, which covers the White Mountain region in the eastern part of the state, quoted her saying, "I am proud that my state is hosting the group that has protected that right (to keep and bear arms) for 138 years. This is a chance for Arizonans to show our nation's leaders we will not let them take away our freedoms."

At Thursday's debate, Kirkpatrick said she changed her tune on gun control after the 2011 mass shooting at a Tucson Safeway, where then-Congresswoman Gabrielle Giffords survived being shot in the head and six people were killed, including a 9-year-old girl.

In Kirkpatrick's attack mailer on Heinz—as well as on the debate stage—the Congressional candidate also accused her opponent of supporting the NRA when he was a state representative.

"In 2012, the NRA testified at the state legislature about a bill they really wanted to pass, a bill that would allow high-capacity magazines, and Matt Heinz voted for it," she said. "He supported the NRA."

Heinz, a doctor who has worked the emergency room at Tucson Medical Center, said the idea that he would support the NRA when he treats patients with guns shot wounds is "ridiculous" and a "distortion of his voting record."

The vote was on a 2012 bill that blocked the Arizona Game and Fish Commission from limiting hunters' magazine capacity on authorized firearms. The bill received primarily Republican backing, but a few Democrats voted for the bill besides Heinz, including Reps. Steve Farley, Ruben Gallego and Macario Saldate. Former-Rep. Bruce Wheeler, also a Democratic CD2 candidate, voted against the bill.

Heinz says the bill didn't have backing from the NRA and had no opposing groups. A representative from the Arizona Wildlife Federation and Sandy Bahr, the conservation director for the Sierra Club's Grand Canyon Chapter, signed up in opposition to the bill during a committee hearing but did not speak. And former NRA lobbyist Brent Gardner registered in support of the bill.

In one of Heinz's attack ads, he said Kirkpatrick voted to cut Medicare. At the forum, she said this was referring to her vote on the Achieving a Better Life Experience (ABLE) Act, a bill that allows people with disabilities to open tax-free accounts to save for disability-related expense without disqualifying them for certain aid programs where income is a qualifying factor.

Heinz only response was: "What I heard was, my opponent voted to cut Medicare." Technically, she did, along with 183 other Democrats and 221 Republicans. Only a dozen Democrats voted against it.

Kirkpatrick voted for the Affordable Care Act, often referred to as Obamacare, and she told the crowd at the forum that she voted against every Republican-backed repeal bill, but that the market has had many problems.

Rather than support Medicare for All, which has become an increasingly popular idea among progressives, she suggests allowing people to buy into Medicare. She said that Medicare for All would take from specialized care that some groups receive, such as veterans and tribal members, and that businesses and corporations should continue to pay for their employees' healthcare.

Heinz said he supports Medicare for All but that it won't be easy. He said employers could be part of a "Medicare-for-all-like" system where employers would pay a tax to help fund Medicare rather than deal with insurance providers.

"There may be some steps that we have to take," he said. "And opening up Medicare for more people is definitely one of those steps, but the goal has to be diminishing and ultimately removing that for-profit motive from the health care system."

At the start of the forum, Kirkpatrick received boos when she was the only candidate to raise her hand saying she would have joined the 18 Democrats who recently voted yea on a GOP resolution in support of Immigration and Customs Enforcement (ICE).

After the forum, she said that ICE performs a lot of different functions. She supports immigration reform, but says ICE should be a part of that reform.

"The work done by ICE and the Border Patrol must be done in a manner that is humane, ethical, accountable and transparent. Today, in many cases, it is not," she said in a prepared statement the day after the forum. "ICE needs Congressional oversight. Trump's policies—especially around family separation—are illegal and should end immediately."

Kirkpatrick was also the only candidate on stage who didn't raise a hand in support of federal legalization of marijuana.

She told the Weekly after the forum that she doesn't support it because she's concerned there are a disproportionate number of people of color in jail for marijuana crimes. When asked if legalization would help lower those numbers, she said there needs to be more research first, adding that the National Institute of Health should first research how it affects children and the elderly.

Another issue Kirkpatrick has continually taken heat for (and which made it into one of Heinz's attack ads) is her support of a bill that gave a piece of Apache land, called Oak Flats, to a mining company out of Australia.

Kirkpatrick says she got involved to get then-President Barack Obama' support and insert environmental protections into the bill, like protecting the sacred site Apache Leap and consulting with the tribe. She adds that Obama never would have signed it without her involvement.

That area is in the Copper Corridor and the economy there has largely relied on mining, and often times been devastated by it, for 100 years. Kirkpatrick says the local miners want the project, which has yet to happen. And she says many of the indigenous people in the area, many of whom are miners, also wanted it although some of the indigenous leaders opposed it.