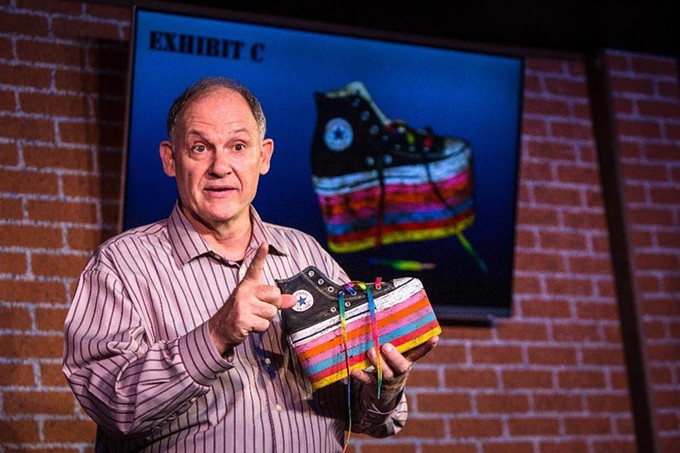 Sometimes a playwright can be their own worst enemy.

That is the curious irony of The Absolute Brightness of Leonard Pelkey by James Lecesne, which opens Invisible Theatre's 48th season. It's a brief one act performed by one actor, David Alexander Johnston, who has a huge job, taking on a number of different roles to play out the story of a missing—and then found dead—young boy. That's the Leonard of the title. He was an oddity of a young teenager living in a small town on the Jersey Shore that had never seen the likes of him. He was, as it is quite obvious from the get-go, gay. And Johnston as Chuck DeSantis, the detective in charge of tracking down Leonard's killer, embodies the characters of the townspeople he questioned in the course of his investigation.

There's his sort-of adoptive mother and her daughter. There's the owner of a clock store, a birdwatcher and a couple of other folks whose remarks, when taken together, paint a fair picture of young Leonard, whom folks notice, but who don't seem to register much offense. He's just different, unapologetically so. Perhaps that the real thing that bothers them.

So we witness the investigation through Johnston's morphing into all these various folks. And he does this well, chiefly because he approaches becoming these folks with subtlety—a shift of posture, a rhythm or softness of speech, not with rushing around putting on different hats or costume pieces. In this way it truly is an actor's piece, showing us the breadth of the actor's talents.

When the show initially came on the scene, the playwright portrayed the detective and by extension all the characters. And by many—but not all—accounts, the piece worked wonderfully. The part, quite literally, was made for the playwright and the playwright for the part.

But here, seeing this in a different time and with a different storyteller, things get a bit dicey. For one thing, Lecesne telegraphs the import of his story from the get-go. The boy was gay. So, of course, he's probably ruffled some feathers and invited trouble by his very being. And that, of course, is a bad thing. Got it. We should not judge folks for being different. Absolutely. That's the play's message. But that's hardly news for us today, especially those found in a theater audience. And for that we are grateful.

Maybe the playwright had an awareness that his would not be news to his potential audiences. So he gives us this other way to see the story—the actor assuming various roles, which Johnston does here fairly seamlessly. But what happens is that the story doesn't quite transcend the showmanship, and while this is not Johnston's fault, he's caught in this unintended irony.

Consequently, it seems the story should land with the weight of some soul-searching revealed by the citizenry of the community inspired by the boy's death, but it's a very soft landing. And what we really need is to see how the case changed the detective. We're told that it does, but we don't really feel it.

This Susan Claassen-directed show is paced well, and there are many light moments. But Leonard gets a bit lost and we leave appreciating Johnston's efforts, but not with revelation. 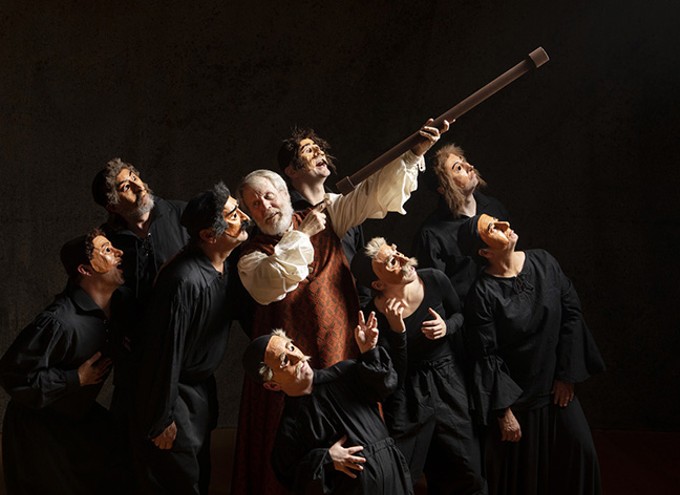 Over at the Rogue Theatre,

the theme for the season is "finding the truth." That certainly opens up all manner of inquiry, and they are off with a very respectable choice, Bertolt Brecht's Galileo.

Of course, Galileo Galilei (played here by Joseph McGrath) was the famous 17th-century mathematician who, through his work and that of others, came to the conclusion that the Earth is not the center of the universe, and it is the Earth that moves, not the Sun. This was troublesome in numerous ways, but Galileo was not aiming to be a revolutionary; rather he was trying to make ends meet by being a teacher while tending to his work of discovery via observable facts.

As we know (and as is played out in the production), the trouble came chiefly from the Catholic Church. Its complaints were that Galileo's theories encroached on the supremacy of God and of the status quo system of governance guided by scripture. And that governance extended farther than the arena of ethics or sins. It dictated the economics of the society. Because those who had the wealth needed labor, they needed a way to keep the peasant class doing the work. The most expedient—and authoritarian—way was to promise them riches in heaven. To question the nature of the firmament would lead to chaos.

Director Cynthia Meier has envisioned an entertaining and light-handed way to bring this story to life. She maintains Brecht's belief that theater should communicate ideas, steering clear of emotional attachments to characters, maintaining a distance between story and audience. But she also has recognized the importance of compelling storytelling. And to serve these guidelines she makes use of wonderfully fashioned masks, created for this performance by Aaron Cromie.

The masks serve several purposes. Brecht's cast is huge and the use of masks enable actors to play multiple characters without issue. They also serve to remind us that this is stylized storytelling, neither sermon nor sentimental. But mostly they are delightful creations. It's hard to believe the show would be as captivating as it is without the masks.

The major players in the story are not masked, and that seems appropriate enough. McGrath embodies the decidedly non-heroic Galileo that Brecht has imagined, a man who acts not out of great passion, but because he is a scientist. In fact, he was a devout Catholic and cared little about the potential effects of his efforts. He merely believed he served the sense of discovery—in the service of finding truth—and he was not unwilling to recant his findings to escape physical torture.

Scenic painter Amy Novelli has beautifully enhanced McGrath's simple set design, and Meier's numerous costumes serve the show well. Musical director, composer and live accompanist Jake Sorgen's work adds an unobtrusive but palpable dimension. This is a compelling show, thoughtful and entertaining at once. For a season of plays climbing the thematic ladder of a search for truth, Galileo provides a very sturdy first rung.