Love, Simon is a sweet throwback to teen romances with a modern twist 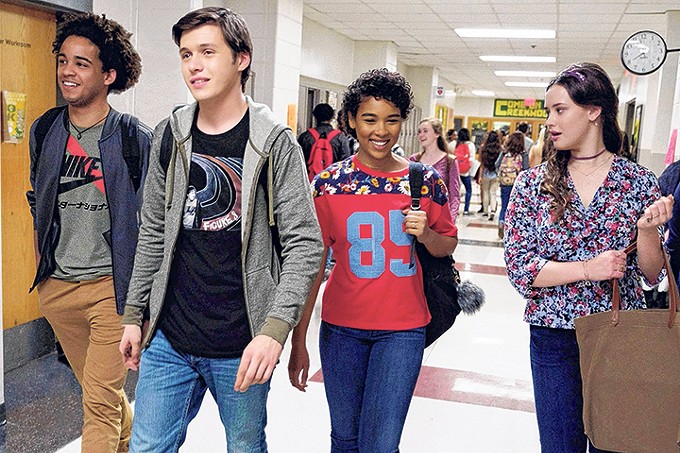 Nick Robinson delivers a breakthrough performance as the title character in Love, Simon, a sweet throwback high school comedy about a gay teen who, thanks to email and social networking, might have to come out in a way that doesn't jibe with his personal schedule.

The film leans towards the formulaic, with a lot of similarities to the works of John Hughes (The Breakfast Club) with some typical characters and synth-heavy soundtrack. While the Hughes and Clueless comparisons are part of its charms, the film feels a bit generic at times.

By the time the movie plays out, some of the formulaic plot mechanics are mostly forgivable because, well, this movie is pretty damned adorable in the end. Based on the Becky Albertalli novel Simon vs. the Homo Sapiens Agenda (which, in my opinion, would've been a much better movie title), the screenplay by Elizabeth Berger and Isaac Aptaker scores enough original and sincere notes to earn smiles and tears.

Simon finds out that somebody at his high school is closeted gay thanks to a social media post. Because he's in the same predicament, Simon creates a Gmail account, contacts the student, and begins a virtual pen pal relationship. Over the course of the e mails, Simon falls in love (or, you know, the high school version of love) with the other anonymous student, constantly scanning his classmates for clues to his identity.

Those classmates include best friend Leah (Katherine Langford), who may or may not have a crush on him, new girl in school Abby (Alexandra Shipp), who is the apple of other buddy Nick's (Jorge Lendeborg Jr.) eye, and Martin (Logan Miller), the resident class clown/annoying guy. All of these characters are enjoyable with the exception of Miller's, who plays the "annoying guy" role so well that he becomes genuinely, unappealingly annoying.

Director Greg Berlanti balances Simon's school life with a heartwarming, beautifully depicted family life. Jennifer Garner, an underrated actress, is awesome as The Best Mom...Ever, while Josh Duhamel is equally terrific as Simon's goofy, trying-to-be-cool dad. Talitha Bateman rounds out the family as the little sister who wants to be a cook. Each of the family members have bona fide Crier-Starter moments in the movie, especially in a late scene between Duhamel and Robinson.

Jack Antonoff is the musical supervisor on the film, so that means a bunch of Bleachers (his band) songs appear on the soundtrack, which isn't necessarily a bad thing. The generally chirpy, happy momentum of Bleachers tracks serves the film well, along with well-placed songs from Whitney Houston, The Jackson 5 and The 1975. Credit Antonoff for coming up with a nice cinematic playlist, John Hughes style.

Robinson gives us a real kid with Simon. He's somebody heavily reliant on emails and social media when it comes to expressing himself, a modern reality. When the screenplay takes his character into unfortunate territories (there's a silly emotional blackmail subplot that hurts the movie more than helps), Robinson survives the wrong turns with a consistently warm and funny performance. He's somebody you root for the second he walks on screen, even when the script isn't up to par. I have to think his work here will take the career to the next level.

There's a moment in this film where two high school kids tell each other that they love one another. They aren't romantically involved, and they never will be, but they love each other in a way that I'm sure many high school students past and present can relate. I'm betting a few more kids will be telling their buddies that they love them after seeing Love, Simon. That's a pretty nice thing to be able to say about a film.