Linda Ackermann is building a musical legacy at The Gaslight Theatre 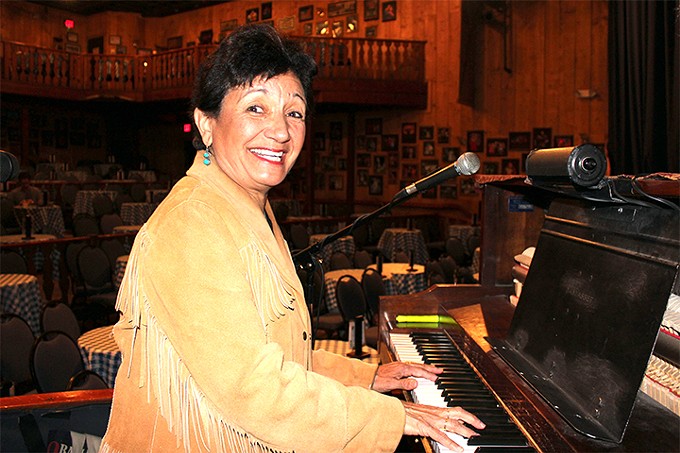 Michelle Jaquette
We’re all in the mood for a melody: The Gaslight Theatre’s Musical Director Linda Ackermann says “there’s rarely a dull moment.”

Never challenge Linda Ackermann to a duel. She's the sweetest soul, but she's got the fastest fingers.

Ackermann, the longtime musical director of The Gaslight Theatre, stuns audiences nightly with her amazing repertoire of music. From '50s and '60s rock 'n' roll to country classics to bops from the Beach Boys, Ackermann can play it all.

Before every show, the soft-spoken Tucsonan unleashes on the piano, her hands flying across the keys. Her music is enough to whir up the time machine that transports crowds to a town where a guy and a gal can do almost anything.

After 21 years at The Gaslight, she's played in 108 shows like "Spider Guy," "The Lone Stranger" and "Ghostblasters." The Tucson original theatre is known for its melodramas that spoof classic storylines with well-meaning heroes and hilariously incompetent bad guys.

For Ackermann, the comedy never gets old.

"There's rarely a dull moment," she said. "I feel like I'm being entertained while I'm working which is nice. I have this strange capacity to laugh at the same joke if it's told right over and over again. The cast teases me about that."

Even the most unmusical of guests leave, after an evening listening to Ackermann play, feeling that they could waltz up to any piano and bang out a melody, so natural is Ackermann's performance.

Her craft sets the actors at ease during the show.

"You feel like you're acting on a pillow when she's out there," said Charlie Hall, an actor at the Gaslight since 2006.

During the show, Ackermann watches the actors' every move and decides when to drop in a few notes to add drama to the acting. Sometimes, an actor will perch themselves on the edge of the piano and sing right to Ackermann.

Her back-and-forth with the actors elicits laughter from the audience.

"I'm always watching and that's why I'm so in the flow of every show," she said. "Watching to see little things they do like a movement... and I'm right there with them and that's very fun for me."

The fun Ackermann has on stage is not lost on the audience.

"Linda is a crowd favorite—of everybody—because Linda's been there the longest and she engages a lot with the actors and actresses," said Sue Bauer.

Bauer, or "the Superfan" as she's known around the Gaslight, would know. She's gone to every Gaslight show since 2012 at least once, and she even advertises for The Gaslight with decals on her car.

"She loves the audience and she loves making people happy and she nails that piano like... my gosh!" Bauer said.

There's a reason Ackermann can play the piano with such eloquence.

Ackermann earned her bachelor's and master's degrees in music composition from the University of Arizona.

"It's all I've ever done really," she said of music, but in school she didn't study piano.

"I took an early interest in the accordion, believe it or not, and so I dropped the piano for the accordion. That's probably one of my regrets."

In her late 30s, she decided she needed some guidance and got up the courage to call internationally renowned pianist and University of Arizona professor emeritus, Ozan Marsh.

"He said he would listen to me so I drove up to his place on Skyline and I was so scared...," she said. "It was probably one of the toughest experiences of my life."

But Marsh liked what he heard and he agreed to teach Ackermann classical piano technique. Under his tutelage she learned Chopin and Liszt.

"He taught me a lot of technique that I think has been very good for me because it has helped me avoid injury in this job ...," she said. "It's the technique like relaxation, preparation, you know arm placement and all that."

Ackermann has worked gigs all over Tucson, including one at Hidden Valley Inn and another at Unity of Tucson church where she is currently a musical director. She even ran a successful private piano studio out of her home while her two kids were growing up.

"A lot of students at the time I remember coming in and out of the house," Adam Ackermann said.

Adam, Linda's 27-year-old son, now plays drums in The Gaslight band alongside his mom. He said one of his earliest memories was his mother filling the house with classical music.

"It was just a really incredible experience to be a part of music even before I realized what music was in some ways," he said.

Ackermann's daughter, Elise Carver, is also a musician and in the past the Ackermann family has performed concerts at The Gaslight with Adam on the drums, Linda on the piano and Carver leading with vocals and a violin or guitar.

What can you say? Music runs in the Ackermann family.

What's your favorite era of music?

You know, when my little kids were growing up that's when MTV started with all these videos. The 80s when it comes to modern music. I love the 80s, but my true love is classical piano—Chopin I think is the greatest music ever written and I love it.

Who's an actor you've really clicked with throughout the years?

There's been so many. Joe Cooper. Everybody loves Joe. He's a great guy. He's been probably my favorite over the years.

Do you write music for yourself at home?

No, I really don't. That's something I've never been driven to do. I prefer just to open a book of Chopin nocturnes and learn a new nocturne. That's what I'll do in my spare time or I'll read. I have a library at home.

For little girls or little boys thinking about pursuing a musical career what advice would you give them?

My advice is mostly for the parents, believe it or not. If your kid shows musical prowess, put them in private lessons with an excellent teacher and do your homework on teachers. Make sure they have an education... and keep them in there if they show a talent for the instrument and they like it well enough.