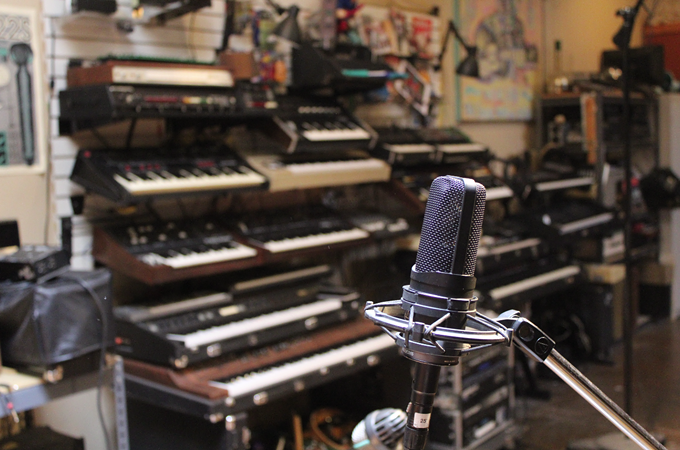 At 8 p.m. Tuesday, March 17, every restaurant, bar, club and cafe in the City of Tucson closed its doors through the end of the month in an attempt to slow the rapid spread of the COVID-19 virus. While this obviously dealt a massive blow to the food and hospitality industries, it also stripped local musicians of vital performance opportunities.

As the world takes modern approaches to this virus, such as switching to online shopping and self-isolation, so is WaveLab Recording Studio, by setting up live streaming opportunities for local musicians and performers.

WaveLab founder Craig Schumacher says now is the time to drop petty competition and trash talk, as the only way local musicians can survive this period of isolation is by joining together to show off their talents.

"I built the infrastructure for livestreaming a while back, but it didn't really catch on," Schumacher said. "But it seems like the moment this thing turned inward and everyone was stuck at home, I thought of live streaming and threw the idea out there and it kind of blew up."

While no roster of musicians or performance schedules are ready yet, Schumacher is busy coordinating with local artists. So far, WaveLab is abiding by the current status quo to close down through the end of the month and will begin live streaming when the time is right.

"It's kind of a moving target with what we can and can't do because of self-isolation and travel," Schumacher said. "I have a facility that can host people, but the question is when can I host people? I feel like there's going to be this pause, and then for a longer period of time clubs still won't be able to host people. I feel like then it will be OK for me to host healthy musicians and people in groups in certain parameters."

Schumacher says this delay gives him time to plan, but it can still feel overwhelming as so many musicians are looking for ways to remain active during this social shutdown. Local songwriters like Brian Lopez, Naim Amor and Loveland have expressed interest in joining the live streaming, with Lopez planned to kick the whole thing off.

"Artists need to do their art, and it's super frustrating to lose that moment where you were going to express yourself with everything you've worked so hard on. It's the same thing athletes are feeling, where they worked so hard and it's just getting taken away," Schumacher said. "I'm always the person who doesn't like to see things that are valuable and can work sitting idle."

While WaveLab contains an extensive array of instruments and recording equipment, it does not have much experience in live streaming. In addition to coordinating with performers, Schumacher is working out the logistics of a live stream, including which site to host it on and how to monetize the performances: stream on Twitch? Have viewers pay up front or offer donations?

He says it's important for the program to feel as though it is being done with a feeling of community spirit, and not explicitly for money or as if it's taking advantage of the situation, but he admits he also can't do it for free.

"How can we be empowered to have everyone in this community still get that income stream that they'd normally get? I know live streaming is part of it, but it's not the whole solution, because you can't set up a live streaming network that will replace your established spot every Wednesday night at a club you have an audience for. It has to be outside of the box," Schumacher said. "We're in uncharted territory. But what I do know is that I have the facility and ability to do it. It would be not that difficult to do, and not that hard to set up a schedule."

The WaveLab live streams are a "broad stroke" idea, and may also include stand-up comics, various band combinations and artistic mediums and more.

"As a community, as Tucson in general, we've been through these highs and these lows. We're all in this together. I can be one of many outlets for these artists," Schumacher said. "I feel like anybody who has an investment in the similar thing that I do, which is any kind of cameras and switching and can hook up to the internet, is kind of duty-bound to say, 'How can I step up and help out?'... Every genre, every musician, everybody who plays should be able to have a shot at whatever we're doing."