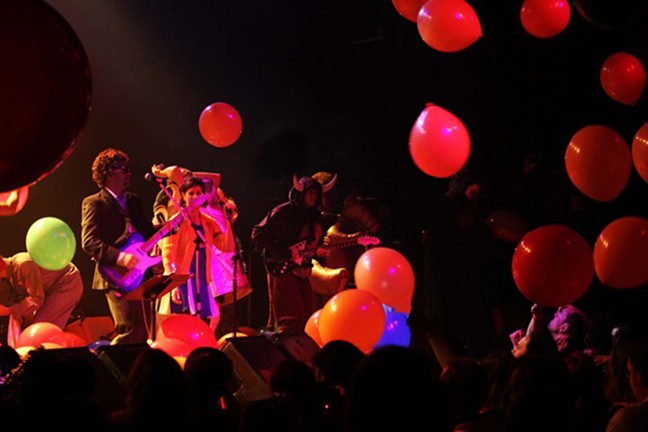 Courtesy photo
The Great Cover Up is happening at CANS, Club Congress and 191 Toole this year.

The Great Cover Up Schedule

As The Great Cover Up celebrates its 20-year anniversary, the charity rock 'n' roll celebration is supporting local music in more ways than one. Besides offering a three-night extravaganza where dozens of local bands cover international acts, this year's proceeds also benefit community radio station KXCI.

"I'm not sure how we were selected, but we're so excited," said KXCI Executive Director Cathy Rivers. "We've always been big supporters of The Great Cover Up."

With the proceeds from The Great Cover Up, KXCI plans to to increase their video presence and DJ classes.

In previous years, KXCI has included frequent previews for The Great Cover Up, either by hosting local bands to perform beforehand, interviewing the organizers or by simply playing the music of the soon-to-be covered big-name acts.

"It just made sense to do it," Hostetler said. "Jane's Addiction back in the day used to have this kind of freakshow performance, and we wanted to replicate it."

Miss Olivia and The Interlopers plan on continuing their tradition of covering both song and stage presence with this year's set. While disclosing which local band is covering who can ruin the fun and surprise, Miss Olivia and The Interlopers are certainly including relevant costumes and props for this year's set. Going all-in on the performance is part of what Hostetler enjoys the most about The Great Cover Up.

"We take it pretty seriously, probably more than a lot of people." Hostetler said. "We take pride in trying to nail it down. You have to focus in on the music, and try to catch everything that jumps out as a listener. Sometimes it's not even the hook of the song. You might hear one specific synth note and say 'oh, we need to include that.' You really do get a deeper appreciation for the song and the artist."

Rivers says one of the best parts of The Great Cover Up is when people are attracted to the event to see their favorite bands being covered, but then end up becoming fans of the local bands at the same time.

"The local bands really do strive to do it right, and that's one of the most impressive parts," Rivers said.

A new location will host some of the sets for The Great Cover Up this year as well. Last year, The Flycatcher on Fourth Avenue hosted a night of the event. But when it closed in July of this year to make way for an upcoming apartment complex, CANS Venue & Lounge announced it is taking the baton. Sadly, on Dec. 4, CANS also announced its closure, but it will still be open and hosting events through the end of the year.

Including new venues is part of The Great Cover Up's history. Over the years, the event has expanded beyond Club Congress onto stages at the Rialto Theatre, 191 Toole and more. After a hiatus in 2015 and 2016, the event founders thought the event would only manage two nights, but the response was so positive, it returned to a full three.

"I do think the Great Cover Up's expansion has been terrific," Rivers said. "In the past, it was harder to get involved. There were fewer venues and fewer bands playing. It's become more inclusive over the years, which is great."

In total, 26 local bands are covering big-name acts this year. Recurring local acts include: Spacefish, Big Mean, The Distortionists, Miss Olivia and the Interlopers, Cloudless, Nick Prevenas and The Bennu. International acts being covered range from the B-52s to Rage Against the Machine.

"It's a really great selection of bands this year," Rivers said. "I'm very excited about Aretha Franklin—and even Justin Timberlake, believe it or not."