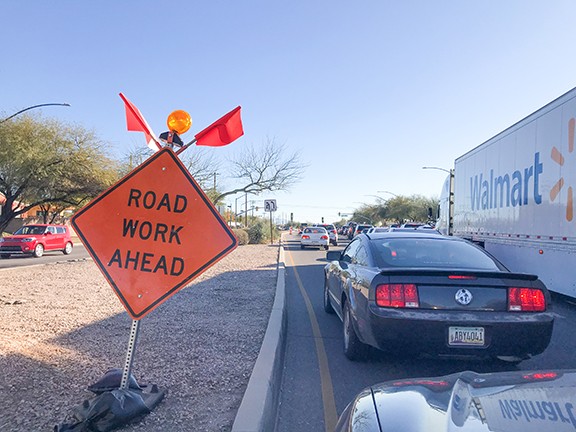 Bandit Riveredge Photography
Tucson wants to hear from you.
The city of Tucson's Transportation and Mobility Department announced the start of its 20-year transportation plan called Move Tucson during a public meeting Wednesday evening at the Fox Theatre.

Officials called for community input to help guide the project.

"It's about working with you all to set privileges and goals for what you want Tucson to become," said Brad Davis of Alta Planning and Design, the firm hired to lead the project. "The plan is going to be innovative, creative and inclusive. By working together we can commit ourselves to create a mobility future that works for everyone in the city."

Davis said Move Tucson will be a "very data-driven process" that will take the public's comments and concerns into account during this start phase. The program plans to engage the community through the spring and summer months and then compile the recommendations and priorities for future review by the mayor and council, according to Davis.

"We're going to be thinking holistically with this process, thinking about mobility in terms of moving people and goods," Davis said. "Planning for mobility has to consider roads and transit, parking and neighborhoods, and destinations, all relative to one another."

Mayor Regina Romero said the community input phase will cost the city $500,000 and last about 15 months. Romero said Move Tucson is a step in the right direction to reduce Tucson's carbon footprint in years to come.

"This particular plan works very well with connecting our mobility and transportation," Romero said. "It is a piece of the puzzle in action planning and resilience to climate change."

Romero also spoke about the concerns she heard from Tucsonans about the city's current infrastructure while campaigning for mayor in 2019.

"Another valid point Tucsonans are thinking is 'Fix our roads,'" Romero said. "But it's not just Tucson saying 'Fix our roads and potholes,' I think we see it as fixing our existing infrastructure."

The announcement coincides with the one-year anniversary of the Tucson City Council passing the Tucson Complete Streets policy, which focuses on reducing pedestrian accidents by giving cyclists and pedestrians priority over vehicles in certain areas of the city, said Romero.

"As we move toward progress and prosperity in our city, we have to think about making our transportation infrastructure safe for each and every member of our community," Romero said. "Whether you live in the east, or the west, or the south side of the city, the streets will be welcoming to you."

The evening's keynote speaker was Gabe Klein, founding partner in Cityfi, former vice president of Zipcar, and former commissioner of both Chicago and Washington D.C. departments for transportation. Cityfi advises governments and companies worldwide on innovation in cities.

Klein said his years of working in cities like Chicago and D.C. have posed unique challenges and opportunities that have helped shape his outlook toward making space for everyone on city streets.

"It's not that the car is bad. It's a tool and can be extremely helpful," Klein said. "But if you use a hammer for everything, right? It's not always the most effective tool."

Klein points out that maintaining the current methods of transportation and infrastructure in numerous cities is not only costing those municipalities excess funds, but is also accelerating climate change.

"We're in a serious pickle with the planet itself," Klein said. "In the last 120 (years) we've started to undo the Goldilocks conditions that actually allow us to live on the planet."

Klein made suggestions for cost-effective improvements that would have immediate social and business impact. His suggestions included lowering speeds on local streets, having shared spaces between pedestrians and vehicles, and protected bike and pedestrian lanes on busier streets.

"I hate to see people ride a bike on Speedway (Boulevard) because it's so unsafe," Klein said. "When you make a place safe, a place people actually want to be, they will go there."