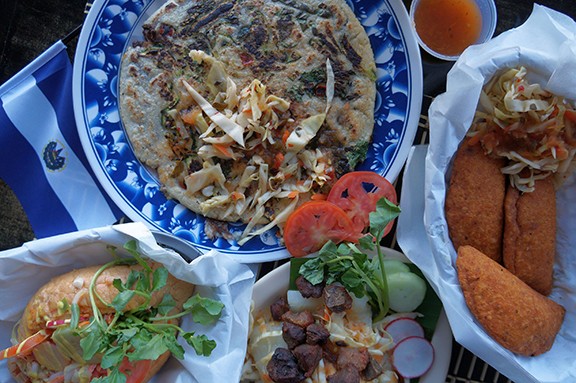 Owner Luis Gonzales grew up in California's Orange County and launched his restaurant career in the fast-food sector just out of high school to support his young family. An employer took a liking to him and moved Gonzales and his family to Tucson in 1995 to manage a newly acquired franchise. After years of corporate toiling, Gonzales knew it was time to move on and run a business of his own.

Gonzales is a third-generation American citizen, but he knew he wanted to serve food from his ancestral home of El Salvador. He started small, selling his goods at farmer's markets. He sold Salvadorian tamales, which are slightly larger than the Mexican variety; the masa is twice cooked in a banana leaf rather than a corn husk. The tamales were a big hit.

But a bigger hit came in the form of something called a pupusa. A pupusa is a thick tortilla (or flatbread) that is filled with a variety of ingredients, such as chicharron, beans, vegetables or cheese. It starts with fresh masa (a combo of ground corn and water) that is stuffed with said ingredients and rolled into a ball, then slapped thin and grilled on a flat surface with hot oil. It is the ratio and quality of the components that make a pupusa so bewitching, and Gonzales had market goers under his spell.

Fans of Gonzales' wares began asking when he was opening his own place. He landed on a Campbell Avenue spot and in just over a month, Gonzales opened up his doors to a positive response.

The restaurant is named after his daughter, who recently graduated from the University of Arizona. Selena's Salvadorian is a quaint homage to all things El Salvador, from the mini blue-and-white-striped flags dotting the tables to traditional artwork and maps on the walls. You'll find the aforementioned tamales (either vegan or filled with chicken), which run about $3 and are quite large and very tasty.

But the pupusas are the stars here. The regular pupusa goes for $3.75, but for $6.99, the grande pupusa is like a flyer saucer filled with Salvadorian wonder. If you are particularly hungry, or feel like sharing, there is a $7.50 "deluxe" option, one that is packed with refried beans along with a mix of spinach, zucchini, kale, peppers and greens, cheese and pulled pork. All of the pupusas are topped with a spicy cabbage slaw called curtido and house-made Salvadoran salsa.

Along with tamales and pupusas, you'll find Caldo del Res soup ($9.99), a heaping bowl of potatoes, carrots, yucca, corn, squash, green beans, cabbage and beef that is a hearty sanctuary in this cold weather. There are also crispy empanadas called pastelitos as well as Panes Rellenos ($6.99), a sort of large torta stuffed with chile-marinated shredded chicken, pumpkin seeds, cucumbers and radishes.

Gonzales is looking into possibly opening up a dance club in the future, but for now he is happy being the Tucson catalyst for sumptuous Salvadorian cuisine.