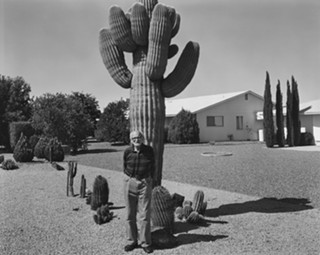 For 33 years, art lovers have been climbing the daunting staircase up to Etherton Gallery, perched high on the second floor of downtown’s historic Oddfellow Hall.

It’s always been worth it.

Right now, for example, if you trek up the 27 steps, you’ll see not one but two stunning exhibitions of 20th century documentary photography.

“Danny Lyon: Thirty Photographs” is a tribute to the best photos of Lyon’s extraordinary career. The other show, “For the Record: Documentary Photographs from the Etherton Gallery Archive,” shows off 85 black-and-white images shot by a throng of renowned photographers: Robert Frank, Manuel Alvarez Bravo, Flor Garduño, and Garry Winogrand.

These two gems will be the last Etherton exhibitions in the handsome Sixth Avenue gallery, and the first exhibition in a new space. Proprietor Terry Etherton is ending his 33 years downtown and moving to a one-story building at 340 S. Convent St. in Barrio Viejo.

“The building was sold,” Etherton says of the current place. “It was time to move on. It’s a cool space. This is our 40th anniversary year. It’s a good time to make a move.”

Etherton opened his first gallery in a retail space on Sixth Street near Fourth Avenue; he stayed there for seven years before setting down roots in the Odd Fellows building.

“I was looking around over the years at other spaces,” he says, especially ones that could accommodate wheelchairs. The Convent space handily fits that bill with an accessible ramp; it also provides ample parking.

Etherton has never been able to show big sculptures in his current space—they’re too heavy to be hauled up the epic staircase—but he’ll be able to display 3D work with ease in the large patio out back of the Convent gallery. First up in the garden gallery will be big granite and glass works by Otto Rigan.

Inside, “We’ll have a grand opening in the fall, with a big Joel-Peter Witkin show, just him,” Etherton says. Works by the renowned photographer, a gallery favorite, will likely take up much of the gallery’s 3,400 square feet.

Etherton is thrilled that the new space was specifically built for art: it held the massive art collection of the late Bill Small. A newspaperman who owned the Tucson Citizen and, briefly, the Arizona Daily Star, Small had a passion for contemporary art; he became a patron to many Tucson artists, buying their works but insisting they never let on that he did.

“I knew Bill Small and I love that the legacy is being passed on,” Etherton says.

Small’s architect son William designed his father’s lair in 1987, creating soaring skylights and concrete floors that somehow fit right in with the neighborhood’s 19th-century Sonoran adobes. The space has had various tenants over the years, housing an art gallery and then an architectural practice.

The owners, siblings Don and Betsy Rollings, are the children of the late Kelly Rollings, once the king of barrio real estate. Kelly also ran an art gallery in the neighborhood and he and Etherton were friends.

“We got along,” he says, and Kelly’s kids invited him to consider the Convent space for his gallery.

“They want me there,” Terry says with a smile. “They’ve been great.”

The buyer of the Odd Fellows is the controversial developer Ross Rulney, who bought the Benedictine Monastery on Country Club and more recently acquired the Rincon Market building on Sixth Street. He’s lined up Delta, a new restaurant created by the owners of The Parish eatery, to take over the first floor in the space occupied for 10 years by Janos Wilder’s DOWNTOWN Kitchen + Cocktails. It closed last fall but survives as a to-go business, operated at The Carriage House near Odd Fellows.

Etherton’s two current photo shows will be a bridge between the two galleries, wrapping up in the old place on May 22 and doing a soft opening in Barrio Viejo, by appointment only, on June first.

Either way, the exhibitions are a must for photography fans.

In For the Record, you’ll see Bernice Abbott’s famous “Flatiron Building,” New York’s beloved triangular tower, caught by Abbott in 1938, when the Depression was beginning to wane. W. Eugene Smith, who lived for a short time in Tucson, is represented by a piece from his heartbreaking Minamata series. A chemical company dumped mercury into a waterway, poisoning the fish regularly eaten in a Japanese town; thousands were stricken by disease.

Smith documented the catastrophe. In a 1972, a mother gently holds her daughter, profoundly disabled by the disaster.

Graciela Iturbide’s 1979 “Mujer ángel” pictures an indigenous Mexican woman gazing down at the Sonoran Desert. Seen in hindsight in 2021, the angel seems to be awaiting the thousands of desperate migrants who would die in that desert in the years to come.

But these pictures also chronicle human comedy and joy. Documenting the many retirees arriving in Arizona some 40 years ago, David Hurn mischiefly captured Sun City residents doing yoga in sync in the great outdoors; Allen Dutton memorialized newcomers standing proudly in front of their new desert homes. Across the Atlantic, in 1980, Elliott Erwitt shot a classic Parisian image: a man with an umbrella leaping across a puddle. The backdrop? The Eiffel Tower, of course.

The accompanying Danny Lyon exhibition celebrates Lyon’s 30 “greatest hits,” as Etherton has it. Now 79 years old and still working, Lyon began his extraordinary career when he was a college student.

The collection begins with a photo of a truck on a desolate road near Yuma, a haunting picture that got the attention of a Chicago gallery when Lyon was just 20 years old. Next are extraordinary photos of the civil rights movement in the Deep South. His 1963 pictures include young Black men raising their arms at the March on Washington; a young Bob Dylan dropping by to play music to activists in Mississippi; and an Atlanta cop squeezing a protestor’s neck from behind, a tactic that uneasily calls up the death of George Floyd.

Other Lyon series focus on a Chicago motorcycle gang; the leveling of historic buildings in New York; migrant farmworkers in Arizona. Best of all are the stunning images of Black inmates in a hell-hole Texas prison, circa 1968. With white guards keeping watch from horses, and Black men bending to pick cotton in the prison fields, you can’t help but think of slavery and the ways that some things—evil things—never really change.

For the Record: Documentary Photographs from the Etherton Gallery Archive

From June 1 and to early September at new gallery location, 340 S. Convent Ave. in Barrio Viejo. By appointment.