Movies: The Hunt - Not Worth the Risk

Seemingly cursed, The Hunt arrives in theaters in the midst of a pandemic 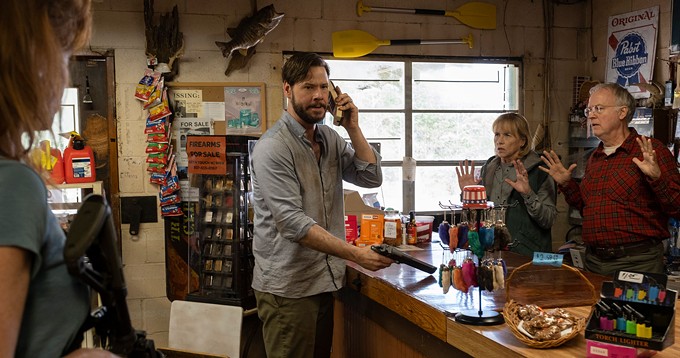 The Hunt, the little B movie that can't seem to catch a break, finally got released to theaters in the midst of a national emergency. The results: Not surprisingly, very few people risked the novel coronavirus in an effort to see it sitting next to people!

Originally set for release last year, the film was postponed until 2020 due to its violent nature and a cluster of mass shootings that were going down at the time. So, the studio picked the safe haven of March for a release, only to have those plans foiled by Mr. Beer Virus.

Straight up, this is a fun B-movie, but certainly would've benefited from a limited release or Netflix opening. It's got its virtues, but you probably made the right choice staying home and watching Disney +. It's good, but not great. Now, when Tenet comes out, I don't care if this emergency is still going on. I have to watch that one on IMAX.

The film starts on a group of hardcore liberals on instant messaging, goofing around about the idea of hunting deplorables for sport, a la The Most Dangerous Game. Was it a joke? Will they actually hunt? What is the name of the movie?

As things turn out, the hunt is soon to be on, and those who voted for Trump will be in the crosshairs. A gallery of non-liberals wake up in a field, find a case of weapons, and are immediately met with gunfire and arrows.

Oh my god, pretty controversial, right? Nah, not really. The point of this movie is that too many people are acting like total assholes when it comes to political ideology. (Hey, I count myself in there from time to time.) So just about every character in this film behaves badly, regardless of political affiliation. The movie is a satiric take on our current political attitudes, and how things are getting a little out of hand on social media. It's also funny at times, bloody, suspenseful, and contains a great kitchen fight in its closing minutes.

There are moments in the script where the movie is almost saying "Hey, we were just ragging on Republicans, but now we will rag on Democrats! So, don't get too mad at us!" Those obvious "balancing act" moments drag the movie down a little bit.

The hunt is masterminded by Athena (Hilary Swank). You don't see her for a large swath of the film, but she shows up eventually, and is one of the folks engaged in the above-mentioned kitchen fight. The movie primarily belongs to Betty Gilpin (Glow) as Crystal, who winds up on the hunted side, and that's not good for the hunters. Betty can throw down, and there's little that scares her.

Gilpin has all the makings of the next, great cinematic action hero. She's got a great deadpan delivery to punctuate her smack downs, she comes up with some facial expressions that I'm pretty sure I've never seen before, and she's a sympathetic hero with depth behind her eyes. I'd say at least 80 percent of the reason I like this movie is because of Gilpin.

Some familiar faces do show up in the movie, including Ike Barinholtz, Ethan Suplee (Looking good, Ethan!), Emma Roberts and Amy Madigan. Granted, don't get too attached to anybody in this movie because the cast thins out fast. Swank, a two-time Oscar winner, shows that she can bring the funk whether she's working for Clint Eastwood or Craig Zobel (the director of this one). She creates a memorable, sinister villain in Athena, just as memorable as the protagonist.

Which is to say, this film, despite its shlock factor and obviousness, is a good time thanks to Gilpin and Swank. They embrace the nonsense and take it to fun levels. The Hunt probably deserved a debit on streaming rather than the big screen, and streaming, it will be, in the near future. When it hits the TV screen, watch it if you are in the mood for a good B movie, because Lord knows you didn't see it in a theater.