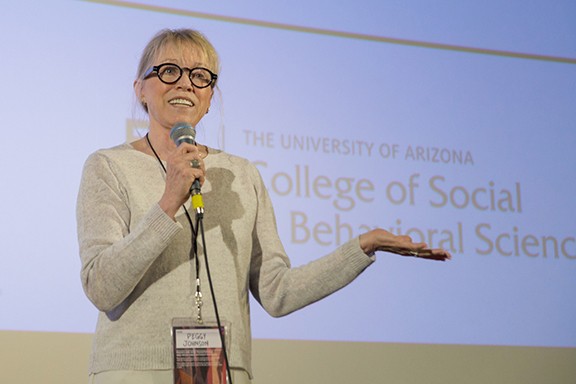 Courtesy photo
Peggy Johnson: “My real motivation was just to keep a source of films here.”
Peggy Johnson grew up loving film, but it wouldn't be until after a 25-year career as a reporter with Arizona Public Media that she would helm the celebrated role she's known for today: executive director of The Loft Cinema.

Johnson, who will be awarded with the Lifetime Achievement Award at the Tucson Local Media Women of Influence awards on March 4, says she constantly went to the theater as a child, and as her parents were fans of watching television as well, movies surrounded her both in and out of the house.

"There was really nothing else to do, so I watched everything," Johnson said. "I feel like watching movies was part of me from the time I had consciousness."

In college, she was exposed to the art films of European icons like Federico Fellini, Ingmar Bergman and Jean-Luc Godard. This only increased when she returned to school to earn her master's degree in media arts with an emphasis in film criticism from the University of Arizona.

Johnson was a regular at The Loft long before it went up for sale in 2000. She was a fan of its left-field, artistic movies that she couldn't see in any other theater, as well as its role and importance in the community. She purchased The Loft with a group of like-minded film enthusiasts and became the executive director in 2002. They quickly turned the theater from a privately held business into a nonprofit arts organization. While Johnson says it's crucial for The Loft to interact with the community, going nonprofit was initially more a "strategy for survival."

"My major goal from the beginning was just keeping it going, because some of the plans had called for it to be bulldozed and eliminated from the Tucson landscape altogether," Johnson said. "I really counted on the movies The Loft had; those were the movies I wanted to see, and I didn't want to only have multiplexes to satisfy my movie needs. So my real motivation was just to keep a source of films here."

A mission-driven, membership-supported nonprofit arts organization since November 2002, The Loft Cinema's mission statement is now to create "community by celebrating the art and diversity of film."

"The existence of The Loft is really a credit to her hard work," says Loft program director Jeff Yanc. "Early on she saved it and helped it turn into a nonprofit and cultivate it. The Loft would not be here if she didn't have that kind of passion. If people in Tucson like what The Loft is, they really owe a debt to her for having that vision early on."

Under her leadership, The Loft has spawned multiple film series to engage the community, such as First Friday Shorts, a monthly competition where local filmmakers submit their short films to be judged by a live audience; The Loft Jr., a free film series of family-friendly films with an emphasis on underserved families; Journalism On Screen, a series pairing films that explore the world of journalism with lively discussions with experts and industry professionals; and Science On Screen, which hosts thought-provoking movies paired with discussions by local scientists.

But most notably for local engagement, The Loft hosts their Community Partnerships series, where local nonprofits and other organizations "rent" a Loft screen to host events that "allow the groups to promote the understanding of specific issues and to raise funds and awareness."

The community engagements and growing reputation has, to say the least, worked out quite well for The Loft. The theater has operated in the black every year since 2005, making it one of the most successful art cinemas in the nation. The Loft's revenue and membership numbers have also continually increased in recent years, and their fundraising revenue jumped from $643,776 in 2015 to $914,837 in 2019.

Beyond financial expansion, Johnson also focuses on creating an open and positive employee culture. She says attaining The Loft's current culture has been a central part of what she's found so satisfying about working as executive director.

"I've really tried to create an atmosphere of respect, where people have their voices heard, and everybody feels empowered to say what they think and give their ideas," Johnson said. "It's been really important to me to foster that kind of culture."

Looking forward, Johnson and her fellow directors are planning to start a multi-part capital campaign to reach an "ultimate vision" for the Loft's campus, which includes expanding the lobby, building new restrooms, becoming fully accessible to those with disabilities, increasing the size of the concession stand and adding two new screens. One of the new screens is planned to be added to the side of screen three, and the other new screen involves constructing a new roughly 150 seat theater between screen three and screen one with the ability to project 35 and 70 millimeter films.

"We've grown in every conceivable way you can grow: we're bigger, we have another screen, we have more parking, revenue grows every year almost, we grow in membership," Johnson said. "And we have plans to continue to grow."

The Women of Influence awards, recognizing outstanding women in the community, is Wednesday, March 4, at Desert Diamond Casinos and Entertainment, 1100 W. Pima Mine Road, Sahuarita. Registration and cocktails begin at 4:30 p.m., with the dinner and awards at 6 p.m. For more info, visit insidetucsonbusiness.com.