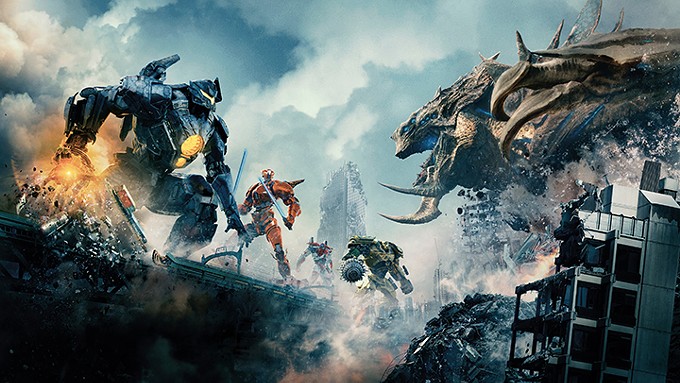 Courtesy
Get ready for the onslaught of crappy special effects!

While the original Pacific Rim had some definite problems, its sequel, Pacific Rim: Uprising is a big, stupid, worthless, son-of-a-bitching waste of time.

Uprising takes an original idea (big Kaiju monsters fighting man-made robots) from director/creator Guillermo del Toro. That Del Toro idea resulted in an OK first movie in Pacific Rim, with great elements but troublesome issues (Robots/Monsters Good...People Bad). Uprising takes that original idea and turns it into something akin to, or perhaps even worse than, your average Transformers movie. It's a watered down, cheap joke of a film that obliterates anything good del Toro started.

Without del Toro directing (he dumped out a few years back to assume a producer's role), the film loses all sense of style and artistic direction. Steven S. DeKnight, who has directed such TV shows as Smallville and Daredevil, makes his feature film directing debut with something that screams "Maybe I should've stuck with the TV gigs...movies are too big for me."

Replacing Charlie Hunnam as the original franchise star, John Boyega jumps headlong into this mess as Jake Pentecost, son of Stacker Pentecost, played by Idris Elba in the first movie. Jake is a former Jaeger (Giant Robot) pilot who, after the death of his dad and a bad Jaeger experience, has taken to partying and trading hot sauce on the black market in a post Kaiju world.

While Idris Elba's character supposedly closed off the monsters from our world, they find a way back (of course). I won't give it away how they come back, but I will tell you that it does involve a shit performance from Charlie Day returning as Newt, one of the few characters from the original that remain. Others include Mako Mori (Rinko Kikuchi) and Dr. Hermann Gottlieb (Burn Gorman), and they all would've been better off doing Dancing with the Stars.

During a deal gone wrong, Jake comes across Amara (Cailee Spaeny), a scrappy kid who has managed to refurbish a mini-Jaeger (Almost Giant Robot) all by herself, so you know it will eventually be her "drifting" with Jake as they pilot a big robot against new monsters and other bad giant robots (Traitorous Dickhead Jaegers).

Like the original, the movie is bad when people are standing around talking. Unlike the original, the action gets even lousier when the slick CGI monsters show up. Del Toro lent a certain strain of realism to his monster battles. That is, they were as real as a fantasy movie can be, with robots that lumbered along and monster haymakers that had some real weight behind them.

Now the monster battles have a cheap, half-baked, way-too-fluid look to them. They glide around in quick cut, super-fast battles that look more like Saturday morning cartoons than big budget, big screen fare. Del Toro's Kaiju battles were actually kind of scary, as a monster movie should be. DeKnight's smackdowns play as if Mark Wahlberg should be nearby, waiting for his glistening, slow motion close up. Actually, Spaeny does get the slow-motion, 360-degree treatment at one point; it's as if Michael Bay chloroformed DeKnight and directed the scene.

So, if crappy special effects aren't enough to keep you away, let it be known that this movie contains what will surely stand as one of the year's worst performances from Scott Eastwood (Son of Clint) as Nate Lambert, Jake's former military mate and sometime Jaeger co-pilot. Whenever Eastwood spoke, I thought I was watching a derivative Starship Troopers sequel. Oh, wait, we have some of those already. Maybe he was in one of them. Let me check. (Bob goes to Internet). No...no he was not.

Honestly, after the subpar performance of the first movie at the box office (it lagged domestically, but did well internationally), I'm surprised Pacific Rim: Uprising even exists. If the saga continues, I have to think it will be via Netflix or something like that.

Whatever they do, I'm hoping I never have to watch John Boyega eat ice cream again. Seriously, he makes really gross sounds when he eats ice cream. Yep, that's the stuff I'm left thinking about after seeing the garbage sequel. Can you tell it didn't have much of an impact on me?