ATC’s production of Low Down Dirty Blues opens this weekend. 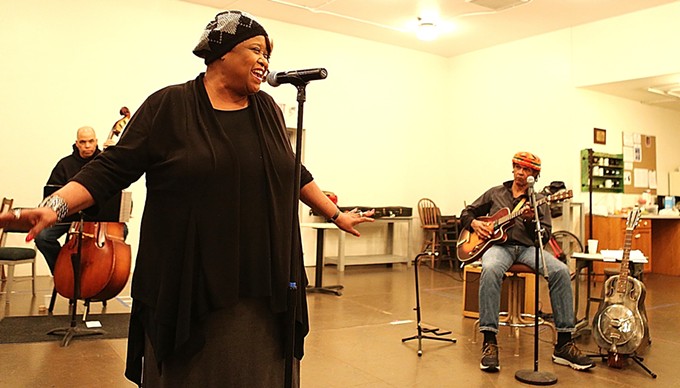 Tim Fuller
Felicia C. Fields is singing the Low Down Dirty Blues in ATC’s next production.

If you're a person who gets the blues, a person for whom the blues gets under your skin and into your bones and makes you start thinking about your feelings and feeling your thoughts, then you might agree with Dan Wheetman's simple answer as to how the genre has impacted music today.

Wheetman is musical director of the Arizona Theatre Company's upcoming production of Low Down Dirty Blues, a musical revue filled to the brim with some of the genre's bawdiest bangers, and which Wheetman and director Randal Myler created together.

Low Down Dirty Blues takes place where all the best blues do: after hours, when a group of musicians assemble for a jam session and take turns sharing stories about the likes of Ma Rainey, Pearl Bailey and Muddy Waters.

The cast of just five includes Shake Anderson (who's worked with everyone from B.B. King to the Spice Girls and has received several gold and platinum albums), Felicia P. Fields (Tony-nominated for her performance as Sofia in Broadway's The Color Purple), Calvin Jones (who has released more than 40 albums and performed in as many countries) and Steve Schmidt (a keyboardist recently inducted into the Cincinnati Jazz Hall of Fame).

Then, there's Chic Street Man, who's been known as such since '73. (His family name is "Streetman" and "Chic" comes from the childhood nickname "Chicken.") Street Man got his first guitar when he was 7, but admits he was more interested in jealously guarding his three siblings from enjoying it than actually playing it himself. When someone broke into his family's home and took pretty much everything, including the guitar, he realized how much he'd actually cared about it. Ain't that just the way?

He got his next guitar when he was 16, and played it this time. When he told his mother, a gospel blues singer, that he wanted to sing like she did, her response came quick: "Boy, you can't sing the blues!"

"You don't want to hear that from your mother, who was the queen of the blues to me," Street Man says. "But I didn't quit. I just said 'Well, let me think about what that means.' I had never sat at the back of the bus. I was raised in a world where I could drink at any water fountain that I chose to. I never had to live in a situation where the housing was dangerous. I never had to worry about being sold. What right did I have to sing the blues?"

After some soul searching that involved studying psychology and living out of a Volkswagen van all over Europe, Street Man realized he wanted to do music. He just had to make sure that whatever music he made was based on his experiences—to think about what he was saying, not just feel it.

So he started listening—John Lee Hooker, Muddy Waters, B.B. King—and he started feeling the way you do when your mother is the queen of the blues and you've got music running through your veins. Now, he's performed all over the world, released four albums and has composed and performed in a long list of theater productions.

"This show in particular is so concentrated on music that you have to have someone who understands the music," Wheetman says. "And Chic is a really a blues guy. You can't fake this music—you can't fake it. You feel it or you don't feel it, and that's that."

"As an 18-year-old kid, it just stopped my world" Wheetman says. "It conveyed something to me about the power of music and what it's capable of doing. How deeply it can touch a human heart."

If you haven't had the chance to see Sun House live, you could learn the same thing from Wheetman himself. I only have the chance to speak with him over the phone (tech week's a hectic time), but I can hear, I can feel, the way he lights up on the other end of the line when he gets started about music—stories about W.C. Handy discovering the slide guitar, Fiddlin' Carson' records flying off the shelves, the mischievous double entendres of some of the earliest female blues singers. He even sings a few lines to demonstrate how Mississippi John Hurt sounded live.

Low Down Dirty Blues is something of a party in honor of the blues, thrown by the people who love it—and love performing it—the most. His love for connecting with people, Street Man says, is why he can get tired of playing the guitar after 15 minutes of practicing, but play for an hour and a half for an audience—whether of 15 people or 2,000—and just keep jammin' on.