When it comes to macaroni and cheese, The Fix is not in

Minuses: I could do better mac and cheese at home, so why bother?

Once primarily existing in a realm of blue boxes and neon-orange "cheese" powder, macaroni and cheese today is ubiquitous on restaurant menus.

And far too often, for some reason, that restaurant mac and cheese is mediocre. In order to elevate this dish, it takes proper quantities of high-quality ingredients, appropriate seasoning and competent preparation—and more often than not, at least one of those elements is missing.

Despite this fact, I had high hopes for The Fix, a new restaurant in the Main Gate Square spot that previously housed the late, lamented Sultan Palace. The Fix's tagline is "Arizona's Mac n Chz Headquarters," and variations on the dish dominate the menu, so I thought perhaps we'd be in for a treat.

Sadly, I instead found more mediocrity.

The menu consists of 10 different types of mac and cheese (or you can combine whatever ingredients you want into your own concoction), as well as four cold sandwiches, four grilled-cheese sandwiches, four salads, cookies and "The BIG Fix," touted as "All-American mac n chz sandwiched and baked between two pieces of bread."

The non mac-and-cheese offerings we tried were fine, if unspectacular. The club salad featured fresh greens and an adequate mix of turkey, bacon, ham, cucumber, avocado, cheddar and tomato ($7.49; we were disappointed that the restaurant was out of our first choice of dressing). The "bacon bacon" grilled cheese ($6.99, with a bag of chips and a tasty little chocolate-chip cookie) was exactly what one would expect: bacon and cheese on white or wheat bread that is then pressed and grilled. The flavor was good, but the sandwich was a wee bit dry.

Now, for the stars of the show, the mac-and-cheese concoctions: They ranged from pretty good to downright disappointing.

The taco mac and cheese ($7.99 for a "minor mac," and $10.99 for a "major mac") was, by far, the best mac and cheese we had. It was packed with enough ingredients with varied and complementary favors to make it enjoyable: beef, cheddar cheese, (a bit too much) onion, tomato, green chile, jalapeño and salsa. The mix worked, even though some of the ingredients promised on the menu were mysteriously missing—avocado, cilantro and tortilla chips. They could have made it even better.

Unfortunately, things went downhill from there. Our friend John made his own mixture ($7.49 for a "minor," or $10.49 for a "major"; includes a cheese, a meat and three fixin's; add $1 for gluten-free macaroni), picking tomato, spinach and bacon in alfredo sauce; it was tasty enough thanks to the ingredients, though the top was a bit too burned.

On the flip side, the bratwurst, jalapeño and cheddar ($6.99 or $9.99) did not have enough caramelization. That's a bummer, because this mac and cheese needed more flavor: Some bites with ample bratwurst were OK; bites without were startlingly plain.

Speaking of startlingly plain: The lobster mac with Swiss cheese ($8.49 or $11.49) was devoid of lobster. OK, that's not entirely true: I could see a fleck of orange here and there, and I presume it was lobster, but there was so little of it that it did not announce its presence at all. I understand lobster is expensive, so one can't expect all that much for nine bucks ... but why have lobster mac and cheese on the menu if there's going to be such little lobster that the lobster is virtually undetectable?

That brings us to the aforementioned BIG fix ($12.99). I'll describe it thusly: If the thought of a heap of bland cheddar mac and cheese placed between two completely unnecessary pieces of bread sounds like it's worth $12.99 to you, have at it.

On both of our visits (a weekday night during a UA basketball home game, and a Saturday at lunchtime), the restaurant was either empty, or had just one or two other customers. The atmosphere is pleasant enough; pop music plays while two TVs show either sports or news. The walls are painted in orange and cream—the color of normal macaroni and cheese. Cute. Also cute are the little sayings hand-painted on the walls ("Everyday Is Mac N Chz Day"). The fast-casual service is friendly enough, if not exactly swift: It took well more than 20 minutes for us to get our dinner order, even though only one other person was in the restaurant at the time.

While we enjoyed the taco mac and cheese at The Fix, other dishes were too plain (and, in some cases, too expensive), too lacking in ingredients and too unsophisticated. Sadly, The Fix is decidedly not in.

XOXO: Where to Rock Tuesday, June 25 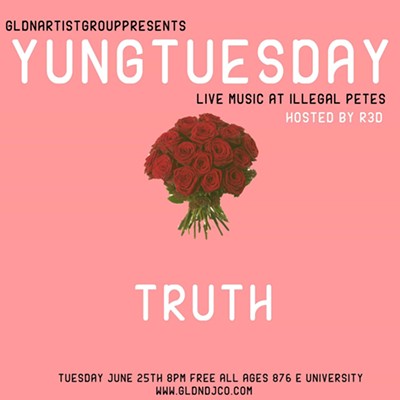