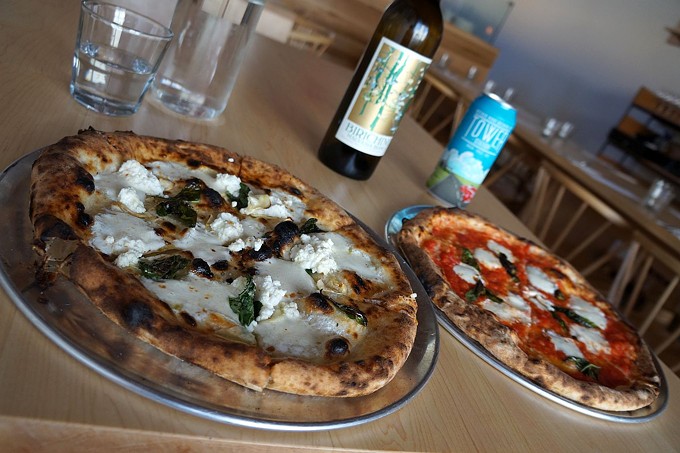 Mark Whittaker
Pizza and Beer, soulmates to the end of time.

What's in a name, really?

When pizzaiolo and Anello owner Scott Girod came up with his plan to open a welcoming and unique pizzeria, he was originally set on Monello, which basically means brat or street urchin in Italian. Not too sure where he was going with that, but the brand was settled on after reviewing other businesses in Arizona. None of them came close to his, so he went ahead with the paperwork to get things rolling.

When Scott posted on Instagram the initial title of his restaurant in progress, word spread quick. It didn't take long before some patent people chimed in and went "Hold on a second there!" Turns out there is a restaurant based out of San Diego with the handle Monello, and they have the designation nationally copyrighted. Oops.

The 900-foot space had been purchased, staff was being trained, tables and the pizza oven were being installed...what to do?

"That's when I came across the word 'anello,'" says Girod, sitting in one of his wood booths in the lean space he has occupied for about two months. "It means 'round' or 'circle'. I like that. You know, pizza is round, circle of life, karma...I actually like the name better than the first."

Girod prefers to consider himself a baker rather than a chef. One of his earliest gigs was in a pizza joint from his hometown of Gilbert, Arizona, and he continued slinging dough all through college. Girod later found himself working for a firm based out of Japan. It was there that he came up with the notion to open his own pizza shop. He needed to get to the heart of what making pizza is all about, so he sojourned to Italy for a spell.

While there, Girod learned how to make authentic pizza dough. When he returned to Arizona, he began to formulate his own recipe to garner a peerless flavor and distinct texture. Even though he had been to the holy land of pizza, Girod still had some learning to do.

"I just knew I had to meet and work with Chris Bianco," says Girod. "I was so nervous when I first met him, but he was great. We worked together for four years and when this location became available, I knew it was time."

Despite his Gilbert roots, Girod always wanted to set his business and raise his family here in Tucson. The area of East Sixth Street and North Sixth Avenue is wrought with awesome businesses, such as Tap & Bottle and Crooked Tooth, but there are not a lot of food options—which is exactly why Girod jumped at the chance to be a premier go-to eatery for folks sampling beer or wanting to take a break from the constant flow of Fourth Avenue.

It might seem risky to serve food only five days a week, for only four hours, without a marquee or sign indicating that you even exist, but Girod embraces the challenge. Not to mention a pizza joint which features maybe three to four pizzas at a time, has a few snacks, such as a bowl of candied nuts ($4) or a plate of roasted seasonal vegetables ($7) and only a scant selection of beer and wine.

But the pizza at Anello is purity and distinction formulated through bite after savory bite. This is considered and confident food, with fresh ingredients constructed with knowledgeable care. It's so good you won't mind if you get a bit lost trying to find the place. The minute you sit down and one of Girod's pizzas glides in front of you, you'll get it; instant sensory gratification. The simplicity of the Marinara pie ($11) with a sauce made from DiNapoli tomatoes, pungent garlic, rich olive oil and garden variety oregano and basil will all come together when you take that first bite.

The dough is perfectly disparate and quite the star. There is a hint of Neapolitan crisp, yet a pronounced chew easily comes through.

All of Scott's training and his own imagination has sculpted an exceptional base for his bright, acidic sauce, locally harvested herbs and sausage from our own Forbes Meat Company. As you continue your waking dream of divine pizza, it's easy to realize what the stark lines of the restaurant mean and why so few seats are involved. The lack of pomposity and top-heavy slices account for all of it. Best of all, it makes sense. No distractions. Just near perfect pizza.

Girod got his start in college student pizza parlors but has now made a name for himself in the realm of sophisticated, and authentic, craft pizzas. You could say that he has come full circle...