Microcosm of the Southwest 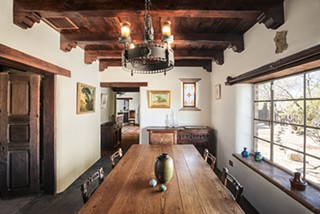 Map will be provided; a docent will be on duty at each property. Visitors should park at Fort Lowell Park and walk across Craycroft Road (carefully!) to get to the houses.

In 1862, during the Civil War, the U.S. Army established a military camp right in the village of Tucson. The location, where Armory Park and the Children's Museum are now, was not ideal. Officers were billeted in people's homes and rowdy young soldiers tended to get up to mischief, including, says Demion Clinco, executive director of the Tucson Historic Preservation Foundation, shooting up local dogs.

The camp stayed in place even after the war ended, but by 1873 the citizenry had had enough. The Army moved its men to the banks of the Rillito—seven long miles away.

Workers had begun construction in 1872, making mud adobes with water from the flowing river nearby. The Hohokam had once lived in this well-watered place, and the plentiful shards of their pottery made their way into the adobe bricks. The new Fort Lowell, named for a colonel felled in the Civil War, served as a large supply depot for the war against the Apaches, and at any given time housed more than 200 soldiers.

"Fort Lowell was dry," says Clinco, an organizer of the tour of six historic buildings, "and the private sector rushed in."

John "Pie" Allen, once the mayor of Tucson, was one of those rushing. He solved the soldiers' alcohol problem by opening a drinking hole a stone's throw west of the fort. But Pie didn't stop there. His tavern was also a gambling hall, general store and post office.

The renovated building, now a sumptuous private home called Las Saetas, is a crown jewel of the tour. Rescued from ruin by a trio of artists in the Bolsius family in the 1930s and renovated again in the 1970s by the current owners, the Sackheim family, the house is a marvel of hand-carved doors, thick adobe walls, fireplaces, a patio graced with 100-year-old mesquites and a sterling view of the Catalinas.

And despite the changes made by the Bolsiuses—Charles, Peter and Nan—the house still has the doors to its old Sonoran-style zaguan, a now-enclosed outdoor passageway through the house that once accommodated horse-drawn supply wagons. The zaguan's now the living room, and the old gambling hall is a master suite.

Casa Saetas and the other properties, rarely open to the public, are "some of the finest historic homes" in Tucson, says Clinco, who grew up in one of the houses. Their array of styles, in a unique combination of Sonoran and early Territorial style of the 19th century and the Pueblo Revival of the early 20th century, "embody the evolution of architectural design."

The Pueblo Revival touches are drawn partly from the New Mexico aesthetic of the Bolsiuses, who moved to Tucson from Albuquerque; the elaborate carvings are inspired partly by the work of WPA artists.

The Bolsiuses also worked on other buildings in the district, often cobbling them together with materials dating back to the old fort. One project was the restoration of the fort's old Commissary. Now owned by the city and divided into five apartments that rest on the old building's foundation, it will be adorned with regional and western art the day of the tour.

The nearby Casa Churey, a 20th-century adobe, was renovated in the 1950s by a pair of French artists, Germaine Rouget Churey and René Churey, who Clinco says once worked as an assistant to Rodin. Casa Churey and other houses on the tour were built after the fort days, but they incorporate walls from the old fort's old adobes—complete with Hohokam shards.

"The tour is both an architecture tour and a history tour," Clinco says.

From the Hohokam of the 11th to 14th century to the 19th-century soldiers to the 20th- and 21st-century renovators, the district offers up a timeline of Tucson history, earning it its nickname of "microcosm of the Southwest."

Its layers of history are fascinating. When Geronimo surrendered in 1886, Fort Lowell lost its usefulness and in 1891 was officially abandoned. Mexican farmers moved into the empty buildings of the fort, which they called El Fuerte, and farmed the well-watered land, adapted the houses to their own uses. Some of their descendants still live there today.

Locals also took advantage of the deserted buildings, carrying off shutters and adobe bricks. They added them to their houses, in Armory Park and West University, where they can still be seen today shading a stray window or shoring up a roof.

By the 1920s, tourists enchanted by the romance of the Old West flocked to see the fort's "beautiful adobe ruins," Clinco says. Around the same time, Las Saetas, one of the largest of the buildings, was commandeered by a Dr. Swan. He turned it into a tuberculosis sanitarium, one of many such facilities in Tucson, whose dry climate was recommended by doctors as the perfect TB remedy.

The Bolsiuses' efforts attracted many other artists and writers to the neighborhood. Thornton Wilder turned up, and so did Alan Harrington. Renowned anthropologists Rosamond and Edward Spice moved in. Princess Margaret came for a visit.

Even Jack Kerouac, Clinco says, "dropped in and mentioned it in On the Road."

The hyperkinetic beat writer noted in that masterwork that the city of Tucson was "one big construction job" with "bustling downtown streets." But he also was struck by the natural beauty of Tucson in general and of Fort Lowell in particular.