Transformers: Dark of the Moon has the coolest premise and best visuals of the three films in the franchise. There were moments during this movie when I was sucked in by the special effects—and almost enjoying myself.

Then somebody in the movie would speak and ruin my buzz.

I won't argue with anybody impressed by the visuals, especially the Chicago battle that features the sight of the Sears Tower on fire while dudes glide around it in those flying squirrel suits. (I know it's called the Willis Tower nowadays, but F that noise; I still call it the Sears Tower.) Moments like that keep me from hating Transformers 3 as a whole; I just hate the vast majority of it.

Things start out good enough, with the film supplying a fictional reason for our race to the moon in the '60s: An alien spacecraft landed there, and a frantic John F. Kennedy (represented in this film by a very poor digital re-creation) wants to be the first to explore it. Neil Armstrong and Buzz Aldrin (who appears as himself later in the movie ... fuck you, Buzz Aldrin!) get to the ship and take some crazy Transformer artifact out of it.

Cut to the present day. Sam, played once again by Shia "I Feed on Suck Movies" LaBeouf, has a new girlfriend (Rosie Huntington-Whiteley), and he's looking for a job. He winds up working as a mailroom guy, which is kind of a comedown after saving the world and getting a medal from Obama. His girlfriend works for Patrick Dempsey, who, as usual, plays a total idiot. Sam is jealous, and we couldn't care less. We want robot action, not Patrick Dempsey making Shia LaBeouf scowl.

Robot action does come in a few solid sequences that take full advantage of the 3-D spectrum. I really enjoyed a highway chase involving multiple Autobots and Decepticons. (I have to refer to them once in this article with their proper robot designations to satisfy the Transformers geeks.) However, these somewhat-fun moments are consistently ruined by people talking and wasting much of this film's mammoth 157-minute running time. Why are there people in these things, anyway? Just give us the damn robots, and cut the running time to 90 minutes.

As for high-profile actors, John Malkovich shows up as Sam's boss, and he mugs so much that you could attach a handle to his skull and drink a hot cup of coffee out of his face. John Turturro has his third go-round in a Transformers movie, and I sort of hate him now. Most shockingly, Oscar winner Frances McDormand shows up as a CIA whatever. It makes you want to take her Academy Award back and shove it up Turturro's ass.

I used to like LaBeouf, but I'm beginning to think he's a few clicks shy of being a total dipshit. This is a kid who could've gone the Dustin Hoffman route; he has talent, and while his face doesn't crack mirrors, he ain't no Tom Cruise or Brad Pitt. When LaBeouf is matched up with an Amazonian goddess, he looks downright ugly in comparison. Watching him kiss a Victoria's Secret model is like watching Vincent D'Onofrio's droopy-faced character in Men in Black kissing Aphrodite.

When the camera molests Huntington-Whiteley, the point of view feels like it comes from Michael Bay's perverted tongue trying to lick her. That's right: When I watched Transformers 3, and the camera lingered on her ass, I felt like I was Michael Bay's putrid tongue.

In other words, I really didn't like this stupid, obnoxious, overlong, ridiculous movie.

Possibly The Only Review of "Transformers: Dark of the Moon" You'll Need 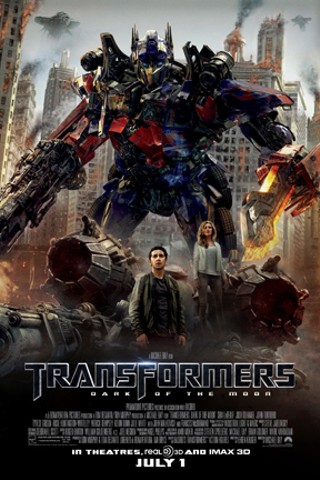