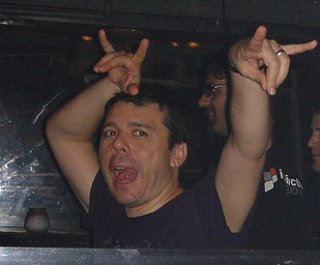 Scott Kirkland of the iconic American electronic act The Crystal Method isn’t into sitting backstage, drinking and waiting for the crowd to dissipate before heading out.

In a pre-coronavirus world, he believed in ushering his fans through the doors personally.

“I like to interact with the crowd when I finish my shows,” he said via telephone from his LA-area home.

“With the safety protocols, things are a little bit different. I used to jump right into the crowd, walk them out and take photos. What else was I going to do? Sit in the back, drink and hang out while they go home? I might as well let them do all my social media stuff. I’m terrible at it.”

Kirkland will bring The Crystal Method to 191 Toole on Friday, Nov. 5, in support of the new single “House Broken” featuring singer/songwriter Naz Tokio. It was released on Oct. 29.

“It’s always great to visit the desert,” said Kirkland, who co-founded The Crystal Method with now-retired Ken Jordan in 1993. “I grew up in Vegas so going out to that terrain and those desert cities have always been fun for us, as a band. That goes back to, probably, ’97 when we played the first traveling electronic touring festival in Arizona, Electric Highway. It featured a bunch of different acts, some live bands, including us. I love those desert nights. It’s always a good time.”

The composer of the theme song to the show Bones, Kirkland is looking forward to the Tucson show, which will feature a retrospective of hits.

“I love turning a cold room into a hoppin’ bundle of energy,” he said. “The last time, if I’m not mistaken, I played Tucson was March 21, 2019. I played 191 Toole. That was a fun place. It was rocking the last time I was there. It’s great to be out and promoting new music and working with some really talented people to create the seventh studio album for The Crystal Method.”

“House Broken” is a bombastic track celebrating escape and freedom that was created during the height of the COVID-19 lockdown. Produced by The Crystal Method and Mark Evans, the genre-bending song, Kirkland said, is up there with “Busy Child” and “Ghost in the City.”

The song was released on Ultra Records, marking The Crystal Method’s return to the label that released mix compilation albums Community Service (2002) and Community Service II (2005) as well as the original soundtrack to the motion picture film London (2006). All three releases charted Top 10 on the Billboard Dance/Electronic Albums chart.

Generally, Kirkland said, he previews music for audiences and, when he returned to the studio, he would tweak a mix depending on how the crowd reacted.

“I would take the information back to the studio and realize this part really worked or this needed a build up a little different, the drums need to be mixed differently,” he said. “This time around, that hasn’t been possible. Since the beginning of this tour, which started in mid-September, the tracks have been in their final stages. I’ve had the opportunity to drop some new things and the crowd reaction seems fantastic. It really has been encouraging. It’s been amazing to be out among smiling, happy people.”

The emotional stories he hears are just as “incredible.” Parents are bringing their children now, or kids pay homage to late family members by attending The Crystal Method gigs.

“I had one fan tell me, ‘My dad introduced me to you, but unfortunately, he passed away a few years back. I celebrate him and our relationship by coming out to the show.’ It’s incredible,” Kirkland recalls. “I’m pretty mild mannered and a low-heartbeat, chill person before the show. But then I get a little adrenaline and I start to play some music, the crowd reacts and the sound system sounds great. It’s like being a kid again. I’ve always loved the interaction. We all leave satisfied with the evening.”