The Gaslight Theatre remains an institution of family fun 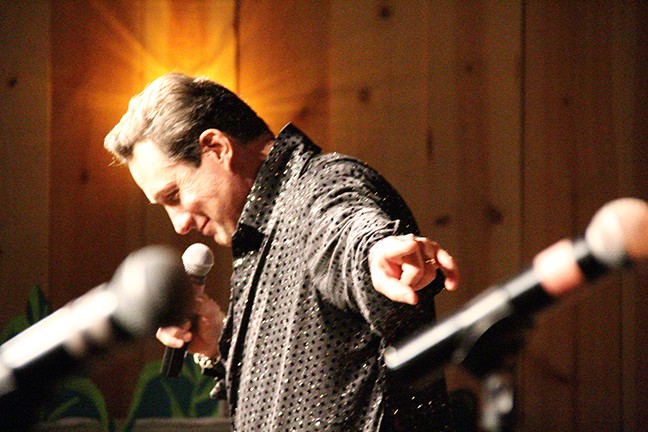 Theater in Tucson's summers is a mere shadow of the rapid-fire shows comin' at ya during what's considered the traditional theater season, September to May. But there are still stalwart stewards of the art who keep grinding it out during our long hot days and nights. And for that we're grateful.

One such dedicated bunch is those wacky folks at the Gaslight Theatre, who bring us dependably honest-to-goodness fun all year long. This summer they are presenting an encore run of Gnatman!, their take on the adventures of—you guessed it—Batman. It's a fun piece of expertly executed tuneful storytelling. And if that's not enough to make you happy, there's also a spoof on the talent show phenomenon, America's Got Talent, after Gnatman saves the day and and that whole story gets wrapped up. You get bang for your buck at the Gaslight.

Heather Stricker is the public relations director for the Gaslight Theatre and its many spin-off enterprises. So when you talk to her about the Gaslight empire, including the recently established Gaslight Music Hall in Oro Valley, her enthusiasm is what you would expect from one whose job is to spin things very favorably for the mothership.

But Stricker is also a member of the acting/singing/dancing/troupe that brings us all those wacky melodrama-style shows that countless Tucsonans have seen bouncing across the Gaslight stage for 40 years. And when you talk with her about this part of her job, you quickly realize this is no promo talk. No, this is personal. And passionate.

A native Tucsonan, Stricker grew up attending shows at Gaslight: "I think I was 6 or 7 the first time I went." She loved the shows and, really, the whole experience the Gaslight provides—the free popcorn, the sing-alongs, the melodramatic action and humor and the audience participation. She insisted all her birthdays be celebrated there. "I always chose the Gaslight. It's always been one of my favorite places."

It still is. After years of national and international touring from her base in New York, she opted to return to Tucson and the Gaslight, where she had begun her professional relationship in 2000.

She muses, "What do you do when you're getting a little older and a little tired" after years of touring? "You go back to one of the favorite places you ever worked." So she's been a regular at the Gaslight since 2013. Other regulars have also worked there for impressive blocks of time, which speaks to the welcoming culture of the Gaslight family. "Joe Cooper has been there 32 years. He used to be one of my favorites as a kid and is now one of my best friends. Funny how life works."

In 1999, singer Robert Shaw was working at Old Tucson Studios and some folks from the Gaslight Theatre saw him and wondered if he might be interested in doing some work with them. They were looking for an Elvis-styled singer, and he seemed a perfect fit.

That worked out pretty well. Over the next 13 years, Shaw created, designed and toured 50 of what he calls nostalgia shows, each reflecting the songs and styles of greats like the Rat Pack, Crosby, Stills and Nash, and those good old surfing songs from groups like the Beach Boys. These ventures gave rise to a company, Lonely Street Productions, that booked those shows across the country. Shaw was also a performer in a number of these shows, and he found himself on the road 200-plus days of the year. After a long stretch of such years, he was tired of touring (sound familiar?) and decided to leave that to others while he focused on the development of his company, both artistically and business-wise. In 2010, he decided to re-locate to Tucson.

Now, late in 2015 a group in Oro Valley that tried to be a clone of the Gaslight Theatre had to close its operations. That meant that a theater space needed a new tenant. The property management company that oversaw that space in a shopping center called Tony Terry, the man who, with some loyal partners, had developed the Gaslight on the east side of Tucson, to ask if he would be interested in using that space. Terry went to see it, and although he knew that it would have to be revamped to fit his purposes, he saw that it could be a venue for entertainment complementing the Gaslight Theatre. For years the Gaslight had hosted a Monday night concert series, and Terry thought that this new space would be a perfect spot to develop that type of entertainment. Thus was born the Gaslight Music Hall. And Terry knew just the guy to help develop the new venture.

In February of 2016, the Gaslight Music Hall premiered under artistic director Robert Shaw. It has been going strong ever since.

Shaw says that they present several events every week. "Every Friday night there's a dance party, where there's a live band and we take out some of the tables down front to use for a dance floor. There are always concerts on Saturdays, and we also schedule other kinds of events, both on weekends and during the week." This past weekend, for example, there was a talent show called Oro Valley's Got Talent. Shaw also schedules touring groups, including theater productions such as Menopause: The Musical, and there are also murder mysteries that involve audience participation.

The response to the new venture has been more than favorable. Shaw praises a gung-ho audience base. "The community of Oro Valley has been incredibly supportive. We wouldn't be here were it not for their support," Shaw says. The mayor, the Rotary Club, the residents have gotten behind the venture wholeheartedly, and many become "regulars who we get to know personally."

The schedule is listed on their website and the events differ each week.

Shaw says that the venture has caught on not only because of the quality of the events and the support of the community, but because Terry "makes sure the customer is always happy. In all my experience, I've never seen anyone so customer obsessed as Tony."

And both Stricker and Shaw agree that Terry keeps his employees happy as well. Stricker says "It says a lot about the Gaslight in general. Once here, actors don't leave, or if they leave, they always seem to come back."