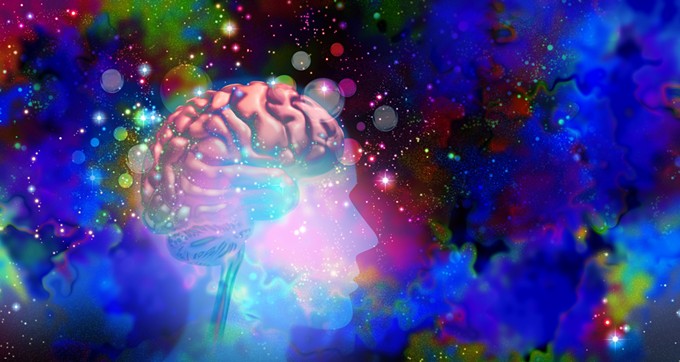 Physicist Christof Koch explains how expanding the walls of our conscious perception could answer big questions about the nature of humanity, including: Why does that dress look white and gold to some people and blue and black to others?

A little over an hour into a keynote speech about the brain and consciousness, physicist Christof Koch, Ph.D., also the chief scientist and president of the Allen Institute for Brain Science and the chief scientist of the MindScope Program, grips the audience’s attention by sharing an image of The Dress. You know the one: the yellow and gold/black and blue frock that captured our collective attention in 2015.

“So it’s obviously white and yellow, right?” he jokes, asking who in the audience sees the same thing and watching a few hands go up. “Who sees it as, what’s the other one, blue and black?” Far more people raise their hands, and Koch teases them for being wrong.

This foray into meme territory is kind of a relief after hearing him talk extensively about neuronal correlates of consciousness and the theory that the brain is a quantum computer earlier in the talk. But it’s all connected. Koch’s point, here, is that different people perceived the dress in different ways, and they did so passionately because it was based on people’s individual perceptions. For example, I agree with Koch that the dress looks white and gold, even though, factually, it turned out to be black and blue (insanity). This is because, as he puts it, everything we experience in the world happens within our own frameworks, what he calls “The Perception Box.”

“Everyone is a prisoner of their experience of reality, living within their own idiosyncratic Perception Box,” he says. “You can sort of, maybe, rationally appreciate the other point of view, but when push comes to shove, you say ‘No, the world is like this.’”

Koch is speaking at the Science of Consciousness Conference in Tucson, AZ, where people who study the mind from every which angle gather from all over the world to discuss consciousness and have playful arguments about it. There are philosophers and physicists, neuroscientists and anesthetists, microbiologists and planetary scientists and meditation gurus and people interested in psychedelics. I meet Stanford professors and dudes in flip flops and recent graduates from psychology and physics programs trying to figure out what they want to do next. Koch himself worked with Francis Crick to kick off the modern search for “neuronal correlates of consciousness,” or the minimum neuron activity required to produce a specific conscious experience.

Crick, of the famous duo Watson and Crick, is perhaps best known for his contributions to understanding the structure and functions of DNA. This work is sort of like the neuroscience equivalent: Now that we know some of the physical DNA structures that lead to specific traits in the body, can we figure out what physical neuron activity leads to specific conscious experiences?

This community of researchers calls explaining this link “the hard problem.” To people who believe that the hard problem exists, there’s something
specifically different, and difficult, about finding the link between physical substrate and experiences (e.g. “falling in love” or “sitting on the couch with your dog watching a movie”) as compared to finding that link for specific behaviors or tasks, like social reasoning, information integration and use of working memory. How do we map something like a toothache, or a gut feeling, or seeing the color red, to specific substrates in the brain? Can we?

There are a lot of factors that make this a complicated question, but one is the brain’s neuroplasticity. The majority of our neurons are in the cerebellum, Koch explains, but there are a handful of documented cases through history in which people are born without cerebellums, and can still function. Or, Koch described talking to people who have cerebellar lesions or have had parts of their cerebellums removed. While these people may lose or struggle with certain abilities, like speaking, walking or playing the violin, they don’t lack consciousness. The best explanation scientists seem to have is that the brain rewires itself to be able to do things like speak, walk and remember. This flexibility is amazing and fascinating and makes the whole thing difficult to map.

The consciousness research community gets very passionate about this stuff. (Koch even has a running bet about solving a piece of the hard problem by 2023, which he reluctantly says he will probably lose.) But it can be easy for a pleb like me to get lost in how interesting it all is and miss the ways figuring these things out can actually improve our lives.

It turns out there a lot of ways, though! Did you know that even though anesthesia has been in use since the mid-19th century, scientists still don’t really understand how it works? Studying consciousness could help figure that out. It could also help us learn more about neurodegenerative diseases, how to build more effective AI models and how different drugs, including psychedelics, can affect the brain.

Which brings us back to the dress. Well, back to the Perception Box that the dress was meant to represent. If we can all only view the world through our own Perception Boxes, which are formed through a combination of nature and nurture, then we are all limited. It’s like we’re all wearing our own sets of glasses we can’t take off. So, first of all, we’ve got to realize we’re in boxes at all. Koch said not realizing the limits of our own perception boxes can cause real problems.

“This gives rise to a lot of suffering and low self-esteem, polarization, distorted thinking and other trauma that we experience in our society today,” he says.

He believes if people could learn to identify their own Perception Boxes, it could be the first step to learning to expand those boxes. At the end of his talk, Koch makes a compelling announcement on behalf of the Tiny Blue Dot Foundation, a nonprofit organization researching consciousness for which Koch serves as chief scientist: They’re funding rigorous, scientifically valid research on how to fix this.

So, if you have a theory on how to expand the bounds of our perception boxes and change humanity for the better, keep an eye out for the call for proposals from the Little Blue Dot Foundation this summer. Maybe we can work toward a world where we are all able to perceive the dress the same way, and Team White and Gold and Team Blue and Black can finally be united.