Ray Lindstrom is one of the all-time great self-promoters 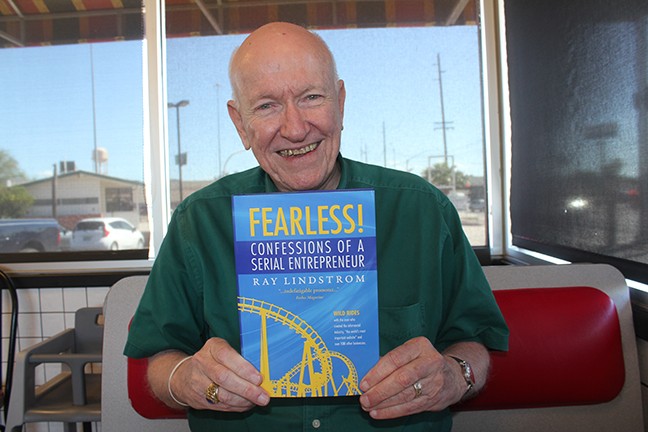 He's been referred to as "Mr. Infomercial," "an Indefatigable Promoter," "a Man of Destiny," a "Master of Taking Marketing Risks"—and other names not printable in this publication.

Ray Lindstrom likes to refer to himself as simply "a serial entrepreneur" and after starting up more than 100 businesses in his lifetime, that title seems appropriate.

"Everybody has ideas," he says. "Following through with those ideas separates the entrepreneurs from the pretenders because success is achieved by actually doing things, completing the projects."

His latest endeavor is a compilation of all previous efforts, a book titled FEARLESS! Confessions of a Serial Entrepreneur, and true to his background as a promoter, the first 100 fans who showed up at a recent book launch got a copy of his $28.95 hardcover tome free—signed by the author at no additional cost.

His has been a lifelong involvement in communications—on-the-air, in print, or huckstering at the highest levels. He's been doing so since he was 8 years old.

"I sold subscriptions to the Chicago Tribune and was a successful enough salesman that I won a new Schwinn bicycle," he remembers.

Lindstrom grew up in Tucson, graduating from Catalina High and the University of Arizona, and became a showman at an early age—like at age 15 when he and classmate Burt Schneider became volunteer weekend radio announcers. "We were so bad that even though we weren't getting paid, we worried about getting fired," he says.

His first paying job came at age 16 when he signed on as a prop boy at KOLD TV, constructing and tearing down sets for commercials. Apparently that wasn't enough, as he and buddy Schneider founded Zoom Records, Southern Arizona's first rock label, in the late 1950s, recording and releasing platters that saw play on area radio stations.

Lindstrom went on to work in TV advertising and advertising agencies and in the 1980s, he found national fame as the Father of the Infomercial industry.

"You know infomercials, those annoying half-hour TV shows that try to sell you stuff you don't need at 3 o'clock in the morning," he says, remembering that one national magazine referred to him as "an indefatigable promoter."

And now all the secrets come out in his 320-page multi-faceted round-up of memories. "This whole thing is a slice of history that's fun to read," he says. "If you care about business, you'll find content you can appreciate and put to use. If you're an entrepreneur, the book is an absolute must."

In it, the Arizona Broadcasters Association Hall of Fame member recounts the Golden Years of broadcasting in Tucson and his stints as a rock and roll disc jockey [KTKT Color Channel 99] and TV clown-on-stilts along with other unusual experiences, such as selling $3,000 Rolex watches for $20 as a promotion for his World Famous Watch Store in Laughlin, Nevada. He'd wear watch-themed suits and ties or dress in blue tights and red cape as a superhero protecting customers from high prices. For his efforts, Forbes magazine called him "The Sultan of Schlock"—and he took it as a compliment.

"I'm drawn to doing the ridiculous," he says and points to another of his business successes, the Starving Artists concept of low-priced paintings. "Like most projects I've done in my life, I had no idea what I was doing" which might explain why he was once almost killed by an angry mob.

"I love doing stuff," he says by way of explaining how his fertile mind works. "As a kid, I'd create carnivals in my backyard—like a ladybug circus—or I'd take several sheets of carbon paper and write a neighborhood newspaper, selling it door-to-door. I love to come up with ideas, work to make them a reality, then turn things over to someone else to run. The key is that I take my ideas and follow them through to fruition. If they make money, that's great too."

Many of his 100 creations have made big bucks, enough to turn him into a multi-millionaire. The mantra he marches by is simple: "If you have an idea that looks good, follow it, push it. You don't need to know what you're doing. Find the right people and ask the right questions."

Being totally independent—working for yourself, not someone else—is paramount. He should know because he resigned a $250,000-a-year job in Phoenix the day his boss told him he wasn't management material, and he's never regretted it.

As a charter member of the successful entrepreneur club, he cites an example in his book of Maria Gomez, an independent businesswoman who sells bananas on the streets of Los Angeles, and Michael Eisner who makes $20 million a year as CEO at Disney. "Michael is an employee while Maria is her own boss. She makes her own decisions. I'd rather be Maria than Michael."

Probably easier to say when you're already an entrepreneurial millionaire.

The book includes some Lindstrom's Laws, tips for starting from scratch, or as he puts it: "I learned the hard way so you don't have to." With a combination of promotional enthusiasm and no sense of false modesty, he says, "This is the greatest combination memoir/business/humor/history/self-help book ever written."