An anti-panhandling ordinance will go before county supervisors, while law enforcement issues warnings in unincorporated areas 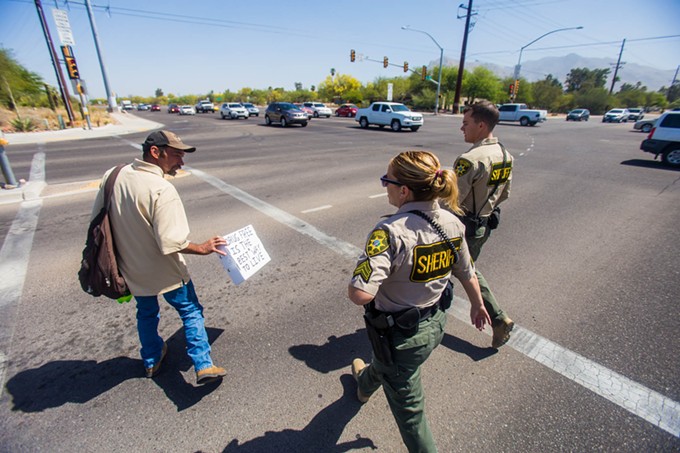 J.D. Fitzgerald
A panhandler, left, is escorted across the street by Pima County Sheriff’s Deputy Daniel Sharp Jr., and Sgt. Erin Gibson, after talking about the potential new signs that may prohibit individuals from standing in medians in unincorporated areas of Pima County.

In a room full of concerned citizens looking to combat panhandling and vagrancy in Northwest Tucson, local homeless and veterans' advocate Cliff Wade didn't say too much during last Monday's impromptu neighborhood meeting at Marion Donaldson Elementary School, though when he spoke, he commanded the attention of more than 200 people.

"These homeless folks," he said, "many of them don't have a place to go, and I ask in this room—especially of those folks that are low income—how many of you are less than a paycheck away from being homeless? Please, please think about what you're doing."

In the light of a suggested ordinance to make standing on traffic medians in Pima County an action worthy of trespassing charges, Wade asked his fellow community members to put themselves in the shoes of a homeless individual and imagine the struggles they constantly go through. Instead of punitive actions, Wade said he would love to help people with services and housing.

Sitting alongside Wade in the elementary school auditorium were dozens and dozens of local homeowners, business partners, real estate agents and regular citizens, all of whom brought with them a concern for an increasingly visible panhandling problem in the community.

"We're all here to learn about pressing issues of panhandling, homelessness, homeless encampments and the escalating violence and resultant trash and debris that's resultant from these issues," said Nicole Brule-Fisher, a resident of the Northwest side for more than a decade.

Though panhandling, homelessness and other related issues are not by any means new topics of conversation, Brule-Fisher had done her part in bringing together a concerned and collective voice asking for an ordinance to be passed for unincorporated Pima County to combat panhandling. Solicitation was the primary target, but Brule-Fisher said concern spanned health and safety, escalating violence, trash in desert spaces and the presence of drug paraphernalia near an elementary school.

"The concern is for health and safety for all of us," she said, "the individuals panhandling, as well as those of us taxpaying residents that have been watching this problem proliferate over the past several years."

The concern of the collected group did not fall on deaf ears; Pima County Sheriff Chris Nanos, Pima County Attorney Barbara LaWall and chief deputy attorney Emilia Cramer were on-hand to field a wide range of questions. Pima County District 1 Supervisor Ally Miller, who had previously tried twice to bring a similar ordinance before the Pima County Board of Supervisors, was also in attendance.

According to Nanos, his deputies have spent the last two years collecting information on incidents related to homelessness after an interest in the information was first brought up by Miller. With that information in hand, Nanos said the department was able to identify 14 different intersections in Northwest Tucson affected by panhandling

Though the problem is well known to the law enforcement community, there is little to be done in terms of addressing residents' concerns and removing panhandlers. While panhandling is prohibited in most of the Tucson area, unincorporated Pima County is without a prohibitory ordinance.

Hoping that the third time is the charm, Miller said she plans to bring a drafted ordinance before the board of supervisors for a third time at the May 17 meeting. The ordinance would prohibit individuals from being present on traffic medians in Pima County, with the purpose of preventing panhandling.

The morning after, Tuesday, April 26, sheriff's deputies alerted panhandlers, newspaper salespeople, sign twirlers and any other individuals standing in medians that "no trespassing" signs could soon be posted.

Though the drafted ordinance is set to go before the board, the sheriff's department will only issue warnings, and will not remove individuals from medians until an ordinance is passed, according to Courtney Rodriguez, a spokeswoman for the department.