Mark Whittaker
Ben Forbes is a man quite familiar with walk-in coolers and carving stations. 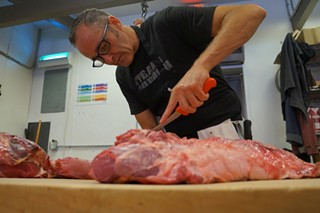 Ben Forbes is not a native to Tucson—in fact it took him a while to get here—but you've seen his work and you know him from the flavor, and texture, of that perfectly cooked steak you had the other night.

The sole proprietor of Forbes Meat Company, currently operating out of Rincon Market, Forbes has a long and storied career before setting up shop on Sixth Street and inviting us all on how sustainable meat should, and could, taste.

"I got started in a mom and pop grocery store when I was 15 back in Newport Beach, California," Forbes said, who brandished an 8-inch curved knife as he sliced through a recently arrived side of beef that he plans on curing and aging. "I was bagging groceries and stocking shelves when I started hanging out with the two butchers there, who were brothers from Iowa. They introduced me to the lost art of being a real butcher. A defining moment for me was when I helped them unload a delivery from this semi-truck. In it was just rows of meat, front to back, and there were these guys wearing white coats covered in blood. I had never seen anything like that before. It was so cool and different."

Seeing that sawdust-covered floor and the wood-paneled, white-paper-hat environment inspired Forbes to find his talent and passion in becoming a butcher from times past.

"I worked and trained in Los Angeles for years," he said. "After that I ended up moving to Prince Edward Island for a while before settling in Portland, Maine. I was in Portland for 14 years, and that's when I started Forbes Meat Company. Everything I do here in Tucson started in Maine."

When the Portland Public Market began to decline, due to no one being able to afford the rent, that's when Forbes moved in. He was fortunate to get a spot at no cost that was already equipped with full butcher gear. Forbes worked out of that space for years before it finally shut down for good. Being suddenly unemployed was another factor that had him looking for work elsewhere though.

"I am a California kid and I could not stand those winters," Forbes said. "I moved to Tucson because I got a job with Whole Foods running their meat department, but eventually our relationship fell apart. Soon after, I worked at Johnny Gibson's, which was exciting because I was really starting to explore what downtown Tucson had to offer. That's when I started meeting local chefs like Devon Sanner (Carriage House), Gary Hickey (Charro Steak) and Travis Peters (The Parish) whose jaws dropped when they saw my product. That was the moment when I started making a relationship with Tucson chefs and restaurant owners."

It wasn't just the good people that cook his intricately cut meat Forbes was starting to partner with. He also found Tucson based farms and ranches that could supply him with locally sourced products.

"Right now, I use pork from E&R Farms, right here in Tucson, out on Side Saddle Lane," he said. "For beef, I am lucky to be partnered with Sky Island which is located just a few miles out in McNeal. My poultry is supplied by Top Knot Farm, a beautiful 12-acre space, out there on the east side. These are animals that are raised humanely, which is very important to me, my product and my customers."

Then Forbes smiled a bit: "Vegans will love us because we are one-hundred percent locally sustainable."

When the Rincon Market called, Forbes answered. Being central has been very beneficial, and Forbes says he pays rent "in sausage," which is another boon to his business.

Outside of providing some of the best restaurants in town with some of the best meat, Forbes also offers retail cuts to the public and can be found at various farmers markets selling his goods. He also is working on a book about the history of the butcher trade and would someday like to open a shop all his own.

"It's going to be a total throwback butcher shop; the wood paneling, the white paper hats, big burly cuts hanging in the window ... all of that," Forbes said. "Basically, I am working on being Sam the butcher from The Brady Bunch." ■