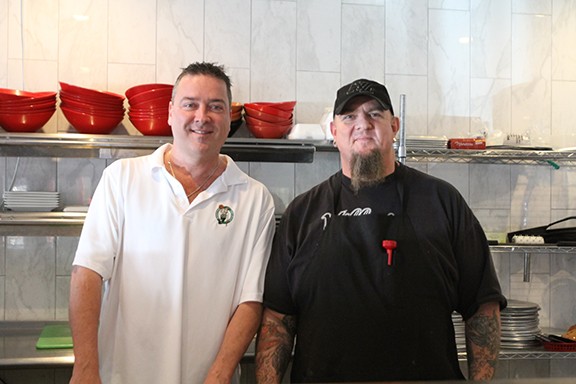 Social media is known to bring like-minded people together.

For instance, Jay Healy, owner of Fire N' Smoke Wood-Fired Pizza and BBQ, happened to be scrolling through Facebook posts when something caught his eye—a photo of a deliciously crafted burger made by one of Tucson's most creative chefs, Lindy Reilly.

You may remember Reilly as the former owner of Lindy's on 4th, the burger joint that received national recognition after being on Food Network show, Man vs. Food in the mid-2000s. But after a family feud over the business in 2017, Lindy was left without a kitchen of his own to make the food he loved. The caption on Lindy's post said it all: "I miss cooking these for people."

"I needed to get some of that action," Healy said. "So, I sent him a message to see if he wanted to meet up and talk."

Reilly said he was surprised to hear from Healy. Previously, the two men were acquainted through Healy's other business, legendary Tucson dive bar, Cowpony. But they hadn't had much contact in years.

"He's always been a real stand up guy, never bullshitted me," Reilly said about Healy. "We sat down and talked. Nothing felt wrong with the conversation."

Now Reilly and Healy are 50/50 partners in Fire N' Smoke, which recently updated the menu to reflect Reilly's culinary creativity in their scratch kitchen. Reilly said this new menu is a culmination of his lifetime experience while continuing to learn new things.

"I love barbeque. I love burgers. Pizza is something I've always wanted to do," Reilly said. "This is like a marriage of all three. And, I get to do my pizza burger that I've been talking about for years."

These days, Reilly's making double smash-style burgers using freshly ground black angus beef. He said he's doing classic combinations that rely on a solid flavor profile as opposed to his former days where the burgers were tasty, but had a novelty food challenge vibe to them.

"This is a style and direction I've thought about over the past couple of years," Reilly said. "It's completely morphed from what I used to do. I would say these are the best burgers I've made to date."

But when it comes to Fire N' Smoke's barbeque and wood-fired pizza, Healy was the one behind those flavors. The man is like a culinary J. Peterman of sorts, traveling the country to learn barbeque and pizza secrets, then bringing them back to Tucson. He's traveled to Southern California for tri-tip training, then to both Kansas City and Texas to learn from local pit-masters.

"I always made barbeque at home and wanted to take it to another level to learn different techniques," Healy said. "They all had different recipes for rubs and sauces so I just combined what I learned and came up with our own house sauce and rub."

Healy said the sauce draws heavily from Kansas City-style barbeque, which can be a little more sweet and spicy in taste and less thick in consistency than traditional Texas style sauce. However, the meat is rubbed with fresh cut herbs and spices and slow-cooked in a Texas style, allowing all the flavors to become infused for a fantastic profile that doesn't require sauce.

"The sauce has got a super pungent flavor. There's definitely some ingredients that build upon each other that I didn't anticipate when I saw the recipe," Reilly said. "But we like to serve our meat with sauce on the side because I hold the belief that if you're saucing your meat, you're hiding something."

When it comes to the pizza, Healy said he spent a week in Staten Island learning how to make and stretch dough from a family that had been in business in the area for more than 30 years. Originally from the east coast, Healy said he wanted to serve an authentic New York-style wood-fired pie here in the Old Pueblo. But he had to tweak the dough's recipe once back in Tucson due to the difference in climate between the two cities.

"I had spent eight days with them learning everything I could. But when I got back here, I was on the phone every day for a week trying to figure out what I was doing wrong," Healy said. "We figured out it was some issues between (the two cities) water and temperature that was making the dough not come out the same at first. But now it's just as good."

"It's constantly 'What's next? What are we doing?'—like a different puzzle to solve each day," Reilly said. "Even with all the dumb shit that comes with it, I love it."