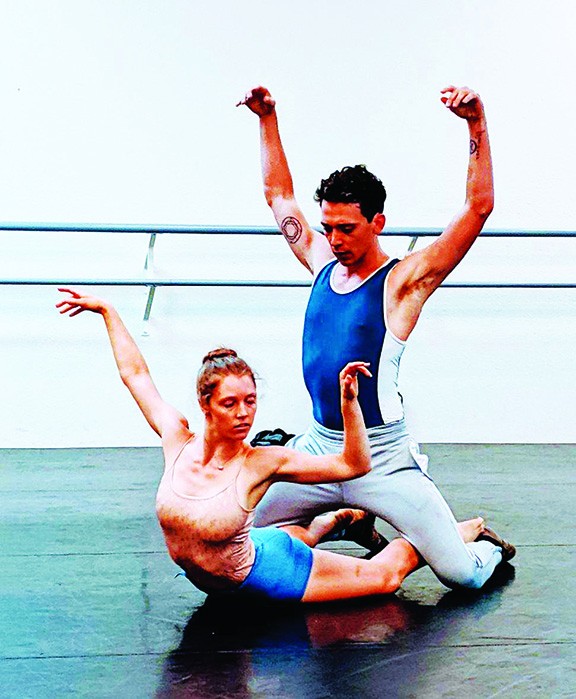 Tickets for Opening Night Gala $100. Regular performances $45 general; $40 seniors, students and military. Available via phone at 800-383- 3006 and online at www.brownpapertickets.com

At a grueling rehearsal last week at the Ballet Tucson studios, four dancers were practicing a demanding and unusual dance: it combined ballet and modern into one piece.

Prima ballerina Jenna Johnson, the company's longtime star, was in pointe shoes at the rehearsal, and she and her partner, understudy Charles Clark, were dancing pliés and turns and arabesques, the body language of ballet.

The other dance couple, new hires Elizabeth Kanning and Casey Myrick, were in full modern mode, dancing on bare feet and sashaying through inventive steps that Cabana called the "showgirl thing" and the "rollover."

Three weeks into rehearsal, and two weeks before the Halloween night opening, the director and dancers were still getting the kinks out. "Liz, can you get your leg up higher?" Cabana called out. "That section should not be fast, Casey."

But after the intense one-hour rehearsal ended, she congratulated the spent dancers. "Much better!" she declared.

Wheeldon, now 46, began his career as a dancer, first with the Royal Ballet in his native England and then with New York City Ballet (NYCB). But he began choreographing in his 20s, while he was still a lauded dancer. He rapidly gained an international reputation for exhilarating dances that redefined contemporary ballet.

He's choreographed for companies all over the world, including the revered troupes where he once danced; he's also made dances for the Bolshoi in Russia, the National Ballet of Canada, American Ballet Theater and the San Francisco and more.

His repertory is wide-ranging. He's done full-length ballets; he's tweaked The Nutcracker, turning its Christmas party into a working-class affair; and he won the 2015 Tony Award for choreography for An American in Paris on Broadway.

Now an important Wheeldon work will be on a Tucson stage.

His Five Movements will be a highlight of Ballet Tucson's fall concert next week. The show also features In the Mood, a new big band work by choreographer Mark Schneider for the whole company, and a reprise of Jekyll & Hyde, created by the company's Chieko Imada and Cabana. The 2015 work is a spooky steampunk dance version of the 1886 novella by Robert Louis Stevenson.

Five Movements is beloved in part for its interesting beginnings. Wheeldon created the first section of it, This Bitter Earth, in 2011 as a pas de deux for Wendy Whelan, an acclaimed NYCB ballerina who is now an artistic director of that company. Whelan danced it with Tyler Angle, but ballet insiders still call it Wendy's pas de deux.

Then in 2012, Wheeldon added more sections, and two more dancers, to the Wendy duet, and debuted the larger piece at the Vail International Dance Festival. The haunting music pairs Dinah Washington's rendition of Clyde Otis's song This Bitter Earth with Max Richter's On the Nature of Daylight.

This is not the first time Ballet Tucson has presented a Wheeldon piece. Seven years ago, the company invited two NYCB dancers to do a guest performance of his Liturgy. But that piece was short, about seven minutes long, and no company dancers were in it.

This time, the Wheeldon work is a hefty 20 minutes long, and it will be performed by the three Ballet Tucson dancers, along with a guest dancer from Dallas, Eugene Barnes, who will partner with Jenna Johnson in the ballet movements.

It's no small achievement for the local professional ballet troupe to win permission to perform a Wheeldon work. In recent years, Ballet Tucson has also danced pieces by George Balanchine; it's scheduled to reprise his famed Serenade in late January/early February.

"It's really great that we're doing work by contemporary international photographers," Cabana enthused. "It's exciting for the dancers and for our audience."

The Wheeldon organization "approached us" after learning that Ballet Tucson had gotten permission to perform Balanchine, Cabana said. "We were thrilled."

Michele Gifford, the Wheeldon répétiteur—dance-speak for the pro who vets the dancers and teaches them the steps—has already spent a week in Tucson, picking dancers and training them on Five Movements. She'll return the week of the performance to fine-tune the work, Cabana said, "and put it on the stage" at Stevie Eller.

The fact that Ballet Tucson is dancing the likes of Wheeldon and Balanchine helped Cabana recruit new dancers this year. Many of them weren't getting opportunities like that at their old job.

"The new dancers are excited about our repertory. They're thrilled to do Balanchine and Wheeldon."

Casey Myrick, the new hire who is dancing the modern part in Five Movements, came from Lexington Ballet Company in Kentucky. His partner in the Wheeldon piece, Elizabeth Kanning, comes from Austin Ballet 2.

"She's really good," Cabana said. And she, like Myrick, won a part in the Wheeldon piece in the very first days of her Ballet Tucson tenure.

Charles Clark, the understudy for the ballet dancer, though he likely won't get to perform the Wheeldon, "is getting the chance to work intensively. It's an opportunity for him" to learn a whole new dance language.

And it's even been a learning experience even for Cabana. She's consulting the notes left by Gifford and studying videos of the original work.

When she's out on the dance floor, working as artistic director, correcting the dancers on issues large and small, she thinks of the dance as a "pointillist painting," she said. "There are so many details, and each one is as important as the big picture."