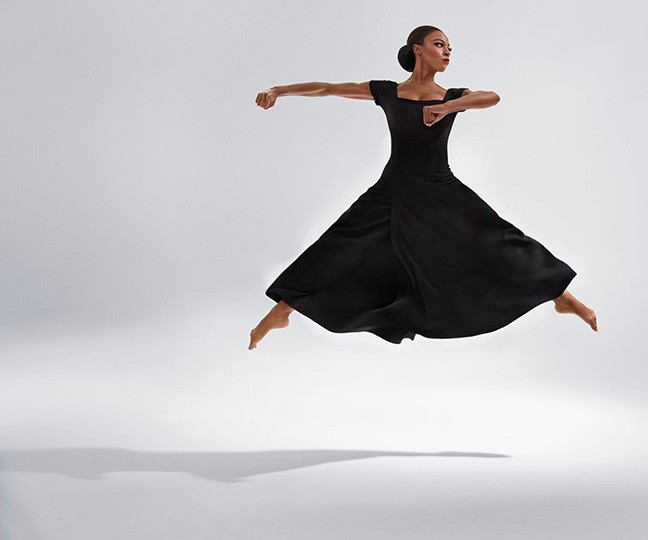 Martha Graham is sometimes known as the Picasso of dance.

But some admirers think that comparison is too generous to the painter. After all, Graham is hailed as the creator of a brand-new art form—modern dance—while Picasso innovated within an already developing style.

Tucsonans can judge for themselves Thursday night, when the Martha Graham Dance Company alights at Centennial Hall for just one performance. In the concert, The Eve Project, the troupe's superb dancers, some 20 strong, will show off the movement she pioneered. In contrast to ballet, Graham's modern dances are grounded and angular, and require her famous contraction and release technique.

The still-influential choreographer and dancer ran her company for an unprecedented 65 years, from 1926 more or less until her death in 1991. When she died at 97, she left an extraordinary legacy of 181 dances.

After the loss of Graham, the company pondered how to stay current while still honoring the legacy of their founder and choreographer. Artistic director Janet Eilber, a former Graham soloist and teacher, hit on a solution: The troupe would continue to dance Graham's own pieces, but pair them with new works by contemporary choreographers, and even commission new dances that explicitly respond to Graham's works.

In the Tucson show, for instance, three dynamic young choreographers, Aszure Barton, Bulareyaung Pagalava and Larry Keigwin, all riff on a signature Graham solo, her famous "Lamentation," a 1930 ode to grief. Their new piece is the aptly named "Lamentation Variations."

Pontus Lidberg, a Swedish choreography and filmmaker, is also on the program, contributing "Woodland," a dance with no particular Graham connections. But the athletic work for 10, like many of Graham's pieces, gives the starring solo to a female dancer.

In fact, the whole concert is intended as a tribute to women; the Eve Project celebrates the upcoming 2020 hundred-year anniversary of American women winning the right to vote.

And of course the Project honors Graham herself with a performance of three of her works.

"Dark Meadow Suite" is a selection of highlights from a long 1947 group piece that Graham herself danced. Unlike her many pieces with mythical themes, "Dark Meadow" was an abstraction.

"Ekstasis," from 1933, a sinewy solo once considered lost, was reconstructed in 2017 by Virginie Mécène, a former Graham dancer and teacher. Graham disliked having her works filmed—she believed in dance as an ephemeral art—but Mécène uncovered the work via photos and writings.

Finally, "Errand into the Maze" is a 1947 duet inspired by the myth of the Minotaur and Theseus. Here, though, Graham renders the heroic Theseus as a woman.

If you miss this primo Martha Graham opportunity—or you're just mad for Martha—you can see the young dancers of UA Dance perform still another of her pieces the following week.

In the Premium Blend concert, UA Dance will perform "Panorama," an early work from 1935. The large group dance, which praises the "power of the people to make change," originally had a stage set consisting of mobiles designed by Alexander Calder. Like "Ekstasis," this dance was lost for a time. But in 1992 researchers discovered sections of "Panorama" on an early film and the Graham company now performs it regularly.

The UA students also pay homage to George Balanchine, the great neo-classical choreographer, by dancing his beloved 1941 "Concerto Barocco." Now in the repertory of the New York City Ballet, the plotless "ballet about ballet" is set to the Bach double-violin concerto in D-minor. The dance's two lead women, Balanchine once said, become the violins.

"Concerto" is another dance that prizes female dancers. There's only one male dancer; the two leads are women. And crucial to the work is a corps of eight ballerinas, dressed in white, who are onstage throughout the piece, dancing exquisite patterns every single minute.

Premium Blend also features "Sentinel," a male quartet by David Berkey, a late UA dance professor. The piece for four men, set to a Brahms' violin concerto, explores camaraderie. Christopher Compton, an adjunct, and Jory Hancock, head of the School of Dance, collaborated on a new work, "House of Life." Danced to operatic arias sung live, the piece is a duet about the way belongings in a home, an empty chair say, can personify the absent person who once owned them.

In between the two concerts celebrating eminent dancemakers, Ballet Tucson presents a fresh program of works by budding young choreographers. Nine company dancers will present brand-new dances to be performed by their pals in the troupe. The show, Footprints at the Fox, will feature dance styles from classical ballet to neo-classical to contemporary and jazz.

The new dancemakers developed their works in ChoreoLab, a Ballet Tucson project that gives aspiring choreographers space and time to create. Among the dances of interest is "Pop" by Michelle Alexander, a contemporary multi-media piece about Andy Warhol and pop art.

Dancer Mauricio Vergara made a topical work about the raging debate over immigration. Called "Pa'l otio lado" (To the other side), the dance also explores Vergara's own fears. Jennifer Holoubek's "Serenità" (Serenity) is a classical ballet, performed on point. Set to Chopin music, it honors the serenity and power of the ocean.

In the spirit of election season, audience members can vote for their favorite dance. The top three vote-getters get a cash prize from the company.