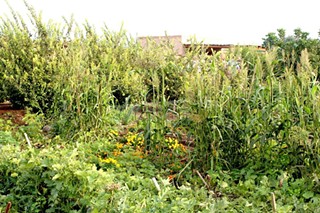 Heath Hoch
Mission Garden grows a variety of native plants at their lot near A-Mountain as part of their goal to preserve and restore the “cultural heritages and historic landscapes” of Tucson’s origin.

Being one of the longest continually inhabited and farmed areas in North America, it should come as no surprise Mission Garden on the flanks of Sentinel Peak was well-poised to survive both pandemic and drought.

Mission Garden is one of the main projects of the nonprofit Friends of Tucson’s Birthplace, which works to preserve and restore the “cultural heritages and historic landscapes” of Tucson’s origin: the Tohono O’odham settlement at the base of Sentinel Peak, where valley natives have practiced agriculture for more than 3,000 years.

Of course, most of these came to an abrupt halt in spring 2020 with the onset of the pandemic. However, Mission Garden staff says they handled the social distancing better than many, thanks to the nature of gardens. While they did suspend large community events, Mission Garden never closed their regular visitor hours.

“We’re fortunate we have a large outdoor setting where people can volunteer safely,” said Kendall Kroesen, outreach coordinator for Mission Garden. “We were getting people who were cooped up and looking to get out of the house, or maybe couldn’t volunteer at other locations. It really helped us get through the almost rainless summer of 2020, which was a tough time for the garden.”

Almost concurrent with the first COVID wave, Tucson sweltered under record-breaking heat; July and then August 2020 were the hottest months ever recorded in Tucson. Pair this with the second-driest monsoon on record, and 2020 was a formidable year for local agriculture.

However, Kroesen credits the dedicated community and agriculture practices like drip irrigation with getting Mission Garden through last summer. In fact, Mission Garden saw more than 200 different volunteers throughout 2020, which is more than their average number of volunteers during a normal year.

“It’s also a combination of being on the historic floodplain and good gardening practices,” Kroesen said. “Our staff and volunteers have done a great job getting plants in the ground; a lot of tree roots reach down and break up the soil. And even areas we don’t plan to plant yet, we cover with a thick wood chip mulch, which creates an insulating layer above the soil, keeping it cooler, moister, and creates more soil microbes and insects. That alone helps the soil.”

In addition, Friends of Tucson’s Birthplace received pandemic benefits as a non-profit, including a Capacity-Building Grant in fall 2020 from the Community Food Bank of Southern Arizona. This capacity-building grant was aimed at creating and streamlining sustainable systems for garden operations to allow more time and energy for staff and volunteers to devote to garden work and outreach activities. Kroesen says this type of financial support was especially important due to the reduction in donations throughout the pandemic.

While Mission Garden is one of the main projects of Friends of Tucson’s Birthplace, it’s only part of a larger proposed mission and garden complex. Parts of the historic Mercado District, mission and garden area fell into decay during the 1800s and 1900s, and were only set up for archaeological work and reconstruction following Rio Nuevo legislation approved by Tucson voters in 1999. Plans for a larger “Tucson Origins Heritage Park” were conceptualized in 2003 and work began. However, economic downturns in 2008 resulted in only parts of the originally planned Mission Garden being completed.

“Friends of Tucson’s Birthplace has always had the dual mission of recreating this historic garden, and also advocating for creating the entire Tucson Origins Heritage Park. The garden was designed as just one component of that park,” Kroesen said. “We came through 2020 in reasonable shape, but going into this year we still were not hosting large public events until about June for a garlic festival and mesquite milling events.”

For one of their largest recent events, Mission Garden hosted the Arizona Pomegranate Festival on Saturday, Sept. 18, which featured food tastings, art exhibits, speakers, and produce sales from the garden’s dozens of pomegranate trees.

In a reversal of last summer, just as visitor traffic began to pick up, so did the rains. Monsoon 2021 ranks as Tucson’s third-rainiest monsoon on record, dumping more than a foot of rain across the Tucson area since mid-June. While the deluge was mostly a welcome site for drought-stricken Arizona, it also resulted in a fair share of property damage, flash floods and swift water rescues. But again, Mission Garden endured and came through stronger.

“We have garden and orchard areas that are sunken down a bit below our pathways, which results in a good amount of rainwater harvesting. At times over the past 10 years, there have been times when rainfall caused those areas to fill up with standing water because it can’t soak in fast enough. But this year, because of the gardening work and soil cultivation we’ve done here, the soil has become much spongier and the rainwater really infiltrates better,” Kroesen said. “The soils here, as they are on the entire floodplain of the Santa Cruz River, are better than in most parts of town because they are sedimentary soils laid down by river water and canals. They’re finer silts and clays. We have an advantage as compared to the foothills. But that’s also the work that Mission Garden staff and volunteers have done to improve the soil.”