Another Federal Law Won't Make a Difference in Equal Pay

Why are we so stupid? No, I don't mean just the readers of the Tucson Weekly. I mean Americans in general.

A few examples: Signs in Yellowstone National Park warn us not to approach bears or buffalo. An uneducated farmer of 150 years ago would not need such a sign. Why do we?

Social Security is going broke! End bickering with a simple TV message: We see an elderly couple opening their Social Security envelope to find an I.O.U. "Sorry, folks, Social Security is out of money." Pan to shocked, tearful faces. A voice cuts in, "When Social Security is revised, all seniors will continue to receive the same amount every month." Now smiling faces are saying, "Oh, thank you." Are we so stupid to believe that any politician could actually end Social Security?

Dr. Richard Carmona tells us that women earn 82 percent of what men earn and urges passage of the Paycheck Fairness Act (Guest Commentary, June 21). If he is correct, then why do self-employed women doctors, surgeons, lawyers and CPAs earn less than men in the same professions? Another group, single childless women, earn just as much as men. Men work longer hours, and generally work in higher-paid jobs. Women often work part-time and take time out of their careers to raise children.

Title VII of the 1964 Civil Rights Act and the 1963 Equal Pay Act already make wage discrimination illegal. Are we so stupid to believe one more federal law will make a difference?

"It's about choice," Irene Messina opines (June 28). Her literary effort waves a veil of liberal rhetoric—"rights," "community," "workers" and "choice"—over commerce in sex.

Ms. Messina wants us to understand: This line of employment entails risks and stresses, and "a financial issue": Certain people shun low-wage jobs and opt to live off "a couple of appointments a week." Never mind law, or social disorder, or personal degradation—the Sex Workers Outreach Project is "legitimate." Why? Well, because she says so. Are they not worthy successors to a long line of identity groups seeking the formal benefits of social acceptance? Isn't it about time to strip quotation marks from the oldest "profession?"

Claim: Since Florida Voter Purge Only Targets Non-Citizens, It's A-OK

Billy Manes and Erin Sullivan ("Disenfranchising 101," Currents, July 5) correctly state that voting is a right, not a privilege, and that the Constitution guarantees the right of citizens to vote, saying citizens cannot be disenfranchised based on race, creed, gender, age or previous condition of servitude.

The problem, however, is that they did not study the Constitution quite thoroughly enough.

And the 15th Amendment reads: "The right of citizens of the United States to vote shall not be denied or abridged by the United States or by any state on account of race, color or previous condition of servitude." Note the term citizens is used, not persons. A person who is in this country illegally is not a citizen and may not legally vote.

And as for the charge of racism, where is their proof? Since Florida is not using race as a criteria, it is not racism.

This article seems to be a baseless, politically motivated rant on the part of the authors.

Name of Event in Listings Was Offensive Toward White Folks

Perhaps you should monitor the use of offensive terms in your paper, even when they apply to white people. I found the "White Trash Ho' Down" listing in the July 5 issue in the Bulletin Board section. Apparently it is acceptable to use a highly pejorative term if you are doing it for a good cause. It doesn't take a lot of research to discover that the term "white trash" refers basically to "poor people in the United States," usually in the Deep South (Wikipedia).

Well, what about brown trash and black trash and yellow trash? In a democratic society, shouldn't all poor people be subjected to the same insulting term? And "Ho' Down" is usually spelled 'hoedown' unless the author is suggesting that the raffle prizes are prostitutes of a certain color.

Far be it from me to dislike a Guest Commentary that starts with my name (June 28).

It's nice to see that the forces for downtown betterment are planning events that would give people a reason to venture into the heart of the city. And really, it's not that hard. I do it just about every day on my bicycle, and that brings me to the point of this missive.

It's those bike racks on Congress Street. They're trapped behind the chain-link fencing, and it's time to free them. And downtown needs traffic any way it can get it.

So, here's my chant: Free the bike racks! 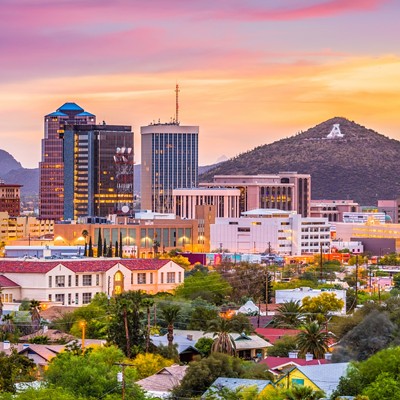