'Jumping the Broom' is forgettable, yet rather enjoyable

I'm still suffering from a serious cinematic hangover after the latest Tyler Perry movie, and when I saw the trailer for Jumping the Broom, I thought it was going to be another Perry monstrosity.

Before heading out to see Broom, I checked the Internet Movie Database and discovered that Perry had nothing to do with it. This made me a little more optimistic, but that trailer was still stuck in my head: The only thing worse than a Tyler Perry movie would be a sad Tyler Perry rip-off.

My worries were alleviated during the opening proposal sequence—before the opening credits even rolled.

Director Salim Akil makes an impressive feature-film debut with this pleasant little throwback of a movie. Broom has the charm of an old-school Hollywood romantic comedy. Heck, the central character, played by the alluring Paula Patton, is even named Sabrina.

You have to be a pretty solid director with a gift for nuance to pull off a scene like the one in which El DeBarge breaks out singing in the middle of Manhattan. Akil has the ability to make something potentially maudlin both cute and entertaining.

The story centers on Sabrina's impending marriage to Jason (Laz Alonso), a man she meets after hitting him with her car. Their families come together at the upscale home of Sabrina's parents (played by the ever-reliable Angela Bassett and Brian Stokes Mitchell). Jason's mom (Loretta Devine) is a postal worker with a bad attitude, and she's angry that she isn't meeting her daughter-in-law until the wedding weekend. Friction between the families is immediately apparent.

Devine had a part in Madea's Big Happy Family, in which I called her "appallingly bad." I stand by that statement; she was awful in that movie. But here, she is able to show off her natural sass while playing a generally mean-spirited character. Her Mrs. Taylor is a big-time jerk—but she is still capable of redemption. She acquits herself here after the crap she spewed in Big Happy Family.

Patton has an admirable level of poise onscreen, whether she's playing a light, vacuous role like she is here, or she's going deeper with something like her impressive turn in Precious. She acts like somebody who has been in films for decades, but her acting career is only about six years old.

Bassett does a good job of trading barbs with Devine as the two mothers go at it. She overdoes a couple of the more melodramatic scenes, but that's OK, because the film itself is an overblown, sappy soap opera that somehow works. The film's title refers to an African-American wedding tradition that Mom Taylor is very much in favor of, while Mom Watson just wants Mom Taylor to shut up about it.

Mike Epps provides some first-class comic relief as Jason's Uncle Willie; he's basically at the wedding to crack wise and hit on Sabrina's aunt (Valarie Pettiford). Epps easily scores most of the film's bigger laughs. Julie Bowen (TV's Modern Family) gets a couple of funny moments as Amy, the wedding planner and token white girl in a mostly African-American cast.

This is the kind of movie that you will forget on the way home, but it provides enough laughs and good vibrations during its running time to earn a passing grade.

Salim Akil is no Tyler Perry ... and that's a good thing.

Jumping the Broom is not showing in any theaters in the area. 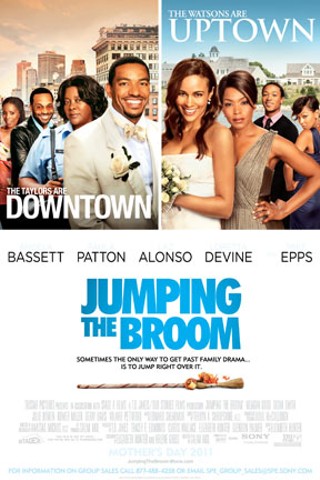