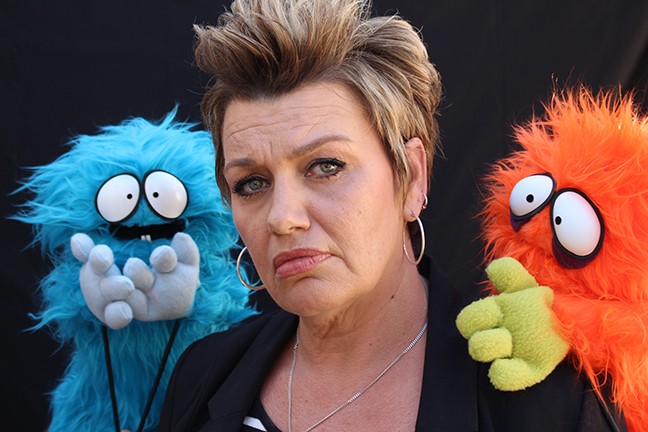 Courtesy
Sarah MacMillan is kind of a psycho

You think you have a story to tell? I'm sure you do. We all do. And although we are not encouraging storytelling one-upmanship, it might be difficult to find a more harrowing, more dangerous, more humorous and more hopeful one than Sarah MacMillan's. Especially when the story has been crafted by a much-lauded playwright and directed by a talented guy who has great empathy for MacMillan's tale.

You can see for yourself when Psycho Sarah takes the stage as an independent production utilizing the Scoundrel and Scamp Theatre space. Written by Toni Press-Coffman, directed by Christopher Johnson and performed by MacMillan herself, the one-woman show is bound to provide a kick-ass evening at the theater.

To say that MacMillan has had a rough time is a ridiculously inadequate understatement. She has dealt with sexual assault, addiction and mental illness. But she insists that she is not a victim, and she is allowing herself to reclaim her power; a large part of that reclamation is sharing her story.

Now, this is pretty heavy stuff, no doubt. But this is Psycho Sarah, a unique and talented actress with a personality that is "irresistible," according to Johnson, who has known MacMillan for about 10 years. They met in a coffee house; he was reading a script and she asked if he was an actor. Her spirit and openness captivated him. They've been close friends ever since.

As they got to know one another, and since they are both theater folks, the idea of a play soon surfaced. In fact, when they decided to give her story legs, Johnson himself was going to write it. He had done a show years before about his own issues, called The Eating Disorder Talent Show. But he realized that MacMillan's story needed the eye and craft of an experienced playwright. He approached Press-Coffman, and she and MacMillan shared lunches and conversation for a year before Press-Coffman took off to fashion a script. The result is a "better, more objective play" than he ever could have written, says Johnson.

"As a director, my job is to find the truth in every scene. Here, I have to mine Sarah's past—an attempted suicide, a high school rape—getting to the truth of those moments. It's tricky. She has to get to the bottom of those moments; she must be extremely vulnerable."

But at the same time, he says, they have to make sure she is safe in those emotional moments and the audience feels safe as well. And even though the specifics are of Sarah's life, "the play is incredibly relatable," says Johnson. "This is a play for people who feel alone, who blame themselves for an incident of sexual assault or some other terrible event they have been the victim of; who can't stop using. Yes, she is acting. She is storytelling. But the script doesn't work unless she lets us experience her wonderful personality."

MacMillan, who has lived in Alaska for long stretches but now makes Tucson her home, has told her story at meetings, at treatment and women's centers, and she is used to being open and honest about herself. "But I thought my story would be good for a broader audience, and for years I've talked with my friends about doing a one-woman show. I've been deeply touched by theater experiences. I thought people could be touched with this."

She said she and Press-Coffman would work with a bullet-point list of MacMillan's ideas with wide margins on the page. Those margins would then be filled with notes as they spoke. MacMillan also made a professional sound recording that could give Press-Coffman a real sense of the natural rhythms and cadence of her speech patterns.

"What happens with Toni then is that this becomes an accessible and entertaining way to hear about this hard stuff." It's a strange challenge for MacMillan, because while the story is hers, the voice of the playwright is quite obvious, and MacMillan "has to memorize lines that Toni has written to craft my story."

"You see?" says MacMillan. "We all have to find humor, and I must be able to laugh at myself, or else it's a torturous life."

MacMillan says she has dealt with so much shame and guilt of rape, addiction and a "classic textbook diagnosis of bi-polar disorder."

Through the 12-step program, medication, therapy, making amends, forgiving herself and others and staying in the moment, she thinks she has been able to "get to the other side," to "have a total chance at a great life." Next month she will celebrate her 19th year of being clean and sober.

There is, of course, the danger when dramatizing such a story like hers of it becoming a self-indulgent, personal confession. MacMillan and Johnson are aware of this. The play focuses only on her life until she got sober at age 25. Says MacMillan, "I have enough distance from these events that it's not a therapeutic exercise that's happening in front of an audience."

It's a very personal story, but it has been developed and will be presented relying on the tools of the art of theater.

This is a very public act of courage. "It's surreal," says MacMillan, "and a teeny bit terrifying." But she adds without a touch of irony, "When I tell friends I'm lucky, they say, what? And I say, yeah I'm lucky. I didn't die."