A border-area home invasion has forced residents to take action 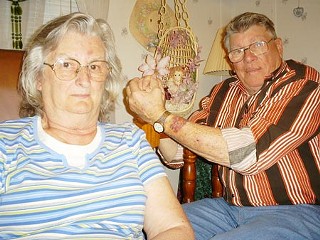 Leo W. Banks
Howard Hunt demonstrates how two home invaders duct-taped his hands to the post of a bed. Because he takes Coumadin and bruises easily, the tape left a nasty mark on his wrist.

Howard and Rosie Hunt might be the luckiest people in Arizona—and that's saying something for an elderly couple who lived through a home invasion on Jan. 20.

Two young men from Chihuahua, Mexico, one carrying a machete, allegedly pushed their way into the Hunts' home, bound them and searched for valuables. The Hunts live right off State Highway 80, 15 miles south of the Chiricahua Mountains town of Portal, along the notorious smuggling route known as the Chiricahua Corridor.

For some time, residents here have been fighting to keep themselves and their property safe from cross-border smugglers and illegal aliens, who—cut off from their groups, lost and desperate—often break into homes.

Life around Portal and its sister town of Rodeo, N.M., 12 miles away across the state line, has become a grim litany of cut phone lines, roof vents removed to get inside, barking dogs at night, trucks stolen, half-eaten food in the kitchen and men peering in windows.

"Now, if you hear something at night, you don't even go out to check. It gets worse all the time."

On Friday, Jan. 22, Cloudt says, Border Patrol arrested 63 illegals near her store in one shift. Lousy weather brought them out of hiding places in the mountains and washes. They wanted to be captured and sent home.

But the Hunt episode has left people here really shaken.

Rosie Hunt, 74, was cooking supper at about 5 p.m. when she heard a knock at the front door. When she responded, she saw two men, one an English speaker, who asked if Rosie would drive them to town. Through his booking photo, she later identified the suspect as 21-year-old Eriberto Marquez.

She said no to the request, and so did Howard, who'd joined her at the door. Marquez kept asking, and Howard kept saying no. "I says, 'It's only two miles up the road. You can walk.'"

Marquez said, "We're tired of walking, and nobody will give us a ride."

When Rosie moved to return to the kitchen, Marquez pushed her into the house. Howard turned to protect his wife and felt a sharp object poking his back.

The object was an 18-inch machete held by the second suspect, identified as 19-year-old Martin Chavira-Morquecho. Howard swung his hand to swipe at the blade and got a tiny cut on his thumb—not a serious problem for most people. But Howard, 75, has had six strokes and takes the blood-thinning medicine Coumadin, which caused the cut to bleed a lot. In addition, he has emphysema and has had a knee replaced, a stent put in his heart and two shoulder surgeries.

"It went downhill from there," says Howard of the front-door confrontation.

Marquez took Rosie down the hall into a bedroom, giving her a push. She turned and punched him on the side of the head. A stunned Marquez said, "You hit me hard!"

Rosie says now, "That probably wasn't very smart, because he could have beaten me up."

Howard wound up in the same bedroom. "I told Rosie, 'Don't be scared, but we're going to get it,'" he says. "I figured then and there we were dead."

Howard's main concern was keeping Rosie safe. He told Marquez, "You harm her, and I'll kill your ass. If I was in Korea right now, I'd shoot you."

That prompted an improbable conversation between Howard and Marquez.

"You were in the service, too, huh?" Marquez asked.

Marquez said, "I was in the Navy."

Howard worked in the mailroom of the Chicago-Sun Times before retiring in 1996. The Hunts have eight children and have lived outside Portal for 13 years.

He said, "Why don't you have any money?"

"Because we're retired," she said.

Marquez sat Rosie at the kitchen table and told her to write down the pin number for her debit card. He also wanted her address, promising to send back whatever money he spent.

Rosie and Howard were taken to a back bedroom, where Marquez asked for duct tape. "Like a damn fool, I told him where it was at," says Howard, who was then taped to a bed, and Rosie to a chair.

The Hunts say the alleged machete man, Morquecho, spoke no English and was the more threatening of the two. In fact, say Rosie and Howard, Marquez was almost gentlemanly. "You'd think nothing of having a conversation with him," says Rosie. "This guy was so polite."

He kept saying, "'We'll be leaving soon.'" Without prompting, he went to the kitchen stove and turned off the heat under Rosie's potatoes so they wouldn't boil over.

The episode lasted about 70 minutes.

While tied up in the bedroom, the Hunts could hear the bandits going through the house; Marquez wearing socks on his hands, say the Hunts, presumably to avoid leaving fingerprints. When Marquez was leaving, he said to Rosie, "Do you want me to turn the air conditioning on? It's hot in here."

Rosie said no. Then he asked, "Do you want me to turn the fan on?"

Moments after they left, Rosie wriggled her wrists free, then slid off the chair and out of the jacket she was wearing, bypassing the tape around her chest.

The bandits stole the couple's Chevy Avalanche and about $100.

Within 20 minutes, a Cochise County sheriff's deputy responded to Rosie's call, and an alert went out. Marquez and Chavira-Morquecho were arrested a short time later when a police officer saw them leaving a Lordsburg, N.M., McDonald's.

They're now in jail in Bisbee, says Alma Barth, a spokesperson for the Cochise County Sheriff's Office. Each will face 14 criminal charges, including two counts of burglary, two counts of aggravated assault with a deadly weapon, two counts of kidnapping, three counts of theft and one of armed robbery.

Howard says a Cochise County detective told him the two men had been previously deported following an armed robbery, but that could not be independently confirmed.

The important thing, says Howard, is that neither he nor Rosie was hurt. "But they did hurt us one way," he says. "They took our trust. It's going to make it rougher on us, because we like to travel, and how are we going to leave this house now?"

He adds: "There are a lot of dope-runners coming up this valley. But you've also got a lot of people who got no more intention of trying to do anything other than bettering their lives. Are you going to shoot them, too? You can't tell the difference. I tell you, it's a bad situation."

On a drive up Highway 80 from Douglas eight days after the incident, more Border Patrol agents were visible than civilians. It looked like a valley at war, and in a sense, it is.

All this is happening as Homeland Security Secretary Janet Napolitano—who in April of last year told CNN that crossing the border is not a crime—is publicly suggesting the border is secure enough to push again for amnesty.

The Hunts would dispute that, as would the Cochise County deputy who advised them to keep a pistol by the front door. When a deputy knocked on neighbor Bill Meloy's door and told him of the break-in, Meloy asked: "Is there anything we can do?"

"I can't believe my country, a county of laws, allows this to go on," says retired Cochise County Superior Court Judge Richard Winkler, who lives outside Rodeo.

Residents of the valley are angry and organizing. The Rodeo market, about two miles from the Hunts' home, is posting signs announcing a meeting on Friday, Feb. 5, at the community center, in an effort to try to head off a bloody tragedy.

But many feel such an event is inevitable.