The Psychedelic Furs prepare for studio with career-spanning sets 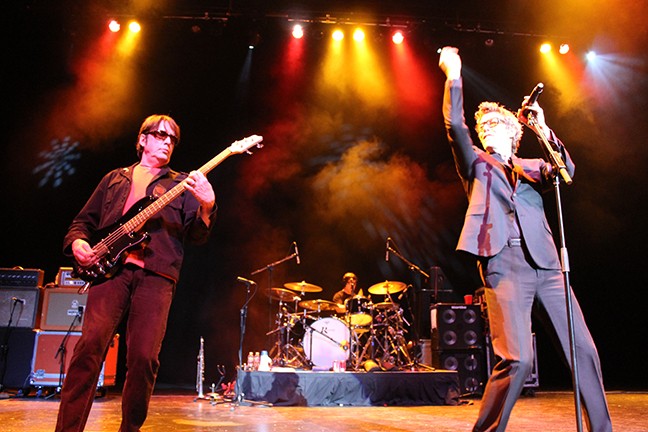 The Psychedelic Furs With Mute Swan

Back in the late 1970s and early '80s, there were few bands in Britain with a more overt "cool" factor that the Psychedelic Furs. The vocals of frontman Richard Butler—a mesmerizing blend of of-the-era, Cure-like morose, and a Bowie-ish croak—plus the melodic bass of his brother Tim Butler, helped the Furs please a post-punk fanbase while simultaneously achieving some notable brushes with the mainstream.

"Pretty In Pink," from the beloved John Hughes movie of the same name, catapulted the band into cinematic immortality. But the legacy of the band has been cemented by albums like Forever Now and the accompanying "Love My Way" single in 1982.

All of that said, the last Psychedelic Furs studio album, World Outside, dropped in 1991. There have been solo albums in the meantime, and both Butler brothers had a '90s band on the go called Love Spit Love. But the new millennium brought with it a Psychedelic Furs reunion, and the group has been touring worldwide ever since. Nostalgia can only carry a band so far though, and Tim Butler says that a new record is on the way.

"We've got 10 backing tracks in the can and we're going to go back and do some more in September," he says. "We're hoping for early-to-mid next year for the release of a new album. Of course, it can't sound like anything but the Furs with Rich's vocals, but it's the Psychedelic Furs with a 2018 music sensibility. You can't help but be influenced by music that goes on around you. It'll definitely be a current Furs."

The current lineup of the band is completed by drummer Paul Garisto, saxophonist Mars Williams, keyboardist Amanda Kramer and guitarist Rich Good. Tim Butler says that he believes this band is every bit as good as the classic lineup, although he's keen to point out that the lineup most consider to be "classic" was actually only together for about three years.

"The lineup we have now has been going for three or four times that length of time," he says. "I think it's the best lineup that I've played with. This lineup puts a rougher, rock-and-roll, not-so-smooth edge on things."

At one point post-reunion (and also during the Love Spit Love years), current Guns N' Roses men Richard Fortus and Frank Ferrer played with the Butler brothers. Rich hasn't seen a Guns N' Roses show since the recent reunion of that band—he says that he's not a fan. But he does admire the musical dexterity of his former bandmates.

"Rich Fortus could play any sort of music, he's such a great guitar player," Butler says. "The same with Frank Ferrer. It just shows that they have a very diverse musical taste. They're not stuck into one genre, like 'This is all we like, this is all we listen to, this is all we play.' Which I think is a healthy way to be."

He's right, of course. Less clean cut is how to deal with the fact that the current band is spread all over the place. Tim lives in Kentucky while his brother is in Upper New York State. Williams is in Chicago, Good is in Southern California, Garisto is in Washington, and Kramer lives in Bath, England.

"We all come up with ideas on our own, and have ways of recording at home, whether it's on a computer or portastudio," Butler says. "We send them to Richard and he'll see if he can get a handle lyrically. If he can't, they're not used or they're used at a different time, or as part of a different song. When it came to recording, we got together for a week to hash them out as a band, and went in to record. It's happening very quickly. We have the song idea up front, before we get together, and we're professionals."

While the experience and expertise of those involved can't be in doubt, the Psychedelic Furs are attempting to make and release a new album within a whole new musical landscape. The industry simply doesn't operate in the same way that it used to.

"It's a whole new playing field," says Butler. "You have to have an online presence. But it makes for an interesting time, to try to get your music out to people. Sales of actual records or CDs have gone down a lot, it's all downloads and streaming. To get out there, you have to get your song in a movie or a commercial on TV, it takes a whole different set of skills to get known, to get out there. So that will be a thing when our new record is done, to negotiate all those hurdles when we get to them."

For now, we can just enjoy the Tucson stop on this current tour, before the pressures of recording put them out of commission for a while. Butler says that the band enjoys playing here, and at the Rialto. But then, they enjoy playing period.

"We took a hiatus in the '90s because we got tired of being the Psychedelic Furs—playing those songs and the grind of touring," he says. "Being on a record label with the pressures that a record label puts on you. Since we got back together, it's all new again. We enjoy being us again, and we enjoy playing those songs. We enjoy hearing the audience singing them along with us. Some of those songs were written over 30 years ago, and people are still coming down and they sing along. The age group can be people who have just been turned onto us—16 or 17 year olds—all the way through to people who are 60 or 65. It's a wide audience base, and to hear all those people getting off on our songs is the best thing you can hope for when you form a band."

For now, there won't be any new songs in the set. It'll be a career-spanner, the hits mixed in with a few deep cuts.

"We have to keep it fun for the audience and fresh for ourselves," Butler says."