In this excerpt from his new memoir, Tucson author Tom Miller recalls the time he went astray in Saguaro National Park 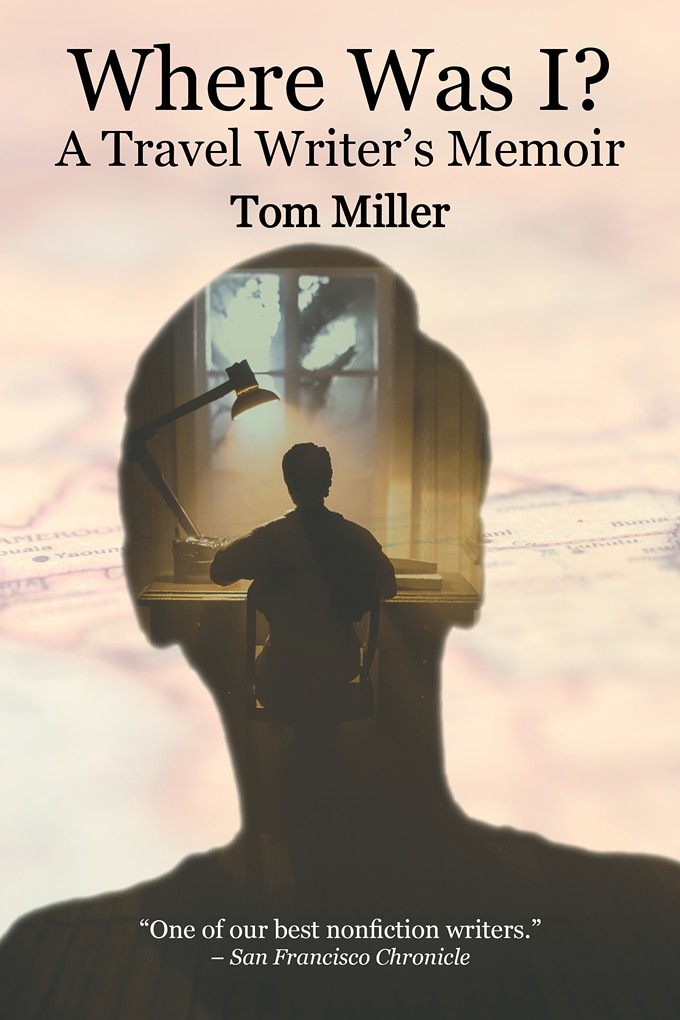 On impulse one Sunday before parkinson’s and after Thanksgiving, we decided to be tourists, that is to say, we went for a walk in the cactus forest east of Tucson. Not just any cactus and not just any forest. The cactus was a saguaro, the plant that had been my friend since moving to the southwest years earlier. The forest was the 66,500-acre eastern flank of the Saguaro National Park. (Your actual acreage may vary.)

We entered the park about 3:30 that afternoon, almost two hours before sunset, looking forward to a hike free of NFL football or NPR news. “Hike” may be too strong a word, but we did undertake an energetic walk after we parked at the Loma Verde trailhead.

How refreshing to stroll through nature, even if it was neatly prepared for you, me, and everyone else. First, we walked this way passing gnarled mesquite trees, then that way avoiding tangled scrub brush.

Finally, we passed palo verde trees slightly uphill to the north, intersecting a trail somewhat downhill to the east. We saw trail signs, which we ignored, confident that we’d end up back where we began. Saguaro here, saguaro there, everywhere saguaro saguaro saguaro. It’s an anthropomorphic plant that one minute has a regal bearing and the next, a goofy cartoonish posture. Carnegiea gigantea reminded me of the drunken fool who shot at a saguaro in the wilderness north of Phoenix back in 1982. Frustrated that the majestic 125-year-old saguaro he fired at wouldn’t fall over dead, he picked up a cactus rib from the desert floor and started poking at one arm of the grand plant. The arm, which weighed almost a quarter ton, fell on him and killed him instantly. The trunk of the cactus, meanwhile, having lost its ballast, fell on him as well. A double homicide, as I saw it.

One of the signs in the Saguaro National Park that Regla and I ignored was for the Squeeze Pen Trail. Another pointed to the Cholla Cactus Trail. One more destination sign was the Pink Hill Trail. The more trail signs we ignored, the more we enjoyed our outing. We were nothing more than weekend trekkers when we found ourselves at a wire fence, the other side of which was a lightly traveled road on Tucson’s far east side. We soon noticed the sun slowly beginning to set and we found ourselves mid-forest. All we had to do was reverse course and we’d be back at the original trailhead.

Against a spreading twilight, the cactus, both distant and nearby, looked more and more elegant. “Mute mobs of them throng the desert dusk,” wrote John Updike in his poem “Saguaros.” The first patches of darkness appeared. Overhead, Pegasus took his rightful position among the stars. The trail signs we’d ignored earlier now confused us with names, directions, and distance. This time it wasn’t just evening, it was night. Would we have to find a rise on this moonless night and stay until sunrise? It appeared we would.

Was that a hoot owl overhead? Maybe. A lizard slithering through the buffelgrass? Could have been. Did we just hear a javelina and a coyote or was that our imagination? If we stumbled into a jumping cholla cactus we’d be pincushions for sure. Mountain lions, we later learned, lived far back in the arroyos. We were nowhere near them, except in our mind.

We looked for the highest spot around, a nearby hillock if possible. Finally we found a slight rise on the Squeeze Pen Trail, took a deep breath, and sat down on the ground. Neither of us spoke our fears out loud, but we were both nervous that we’d be forced to spend the night in Saguaro National Park. To put it bluntly, we were plumb lost. I played the journalist’s game “Write That Headline!” and I didn’t like what I read.

First Regla lay down, her head on my lap. After a few minutes we switched. Would this go on until the Sonoran Desert sunrise, more than 12 hours away? The Dylan line struck me once again: “There must be some way out of here.” At least we could sip water—if we had thought to bring some. Certainly we could use our flashlight—if we had brought one. Our dilemma would be resolved by calling 911—had we carried a phone with us. As the air turned cooler extra clothing would have been helpful—had we brought some. A trail map could guide us—had we not left ours in the car. We were fearful, both of us utterly unprepared and lost. Every few minutes we’d break the silence. “Hellooooo!” we’d yell. “Hellooooo!” We were desperate for leaving and desperate for staying.

While we hellooooo’d, a 48-year-old man driving a 2007 Chevy Tahoe pulled into the Loma Verde parking lot and looked into our car. It was John Williams, a burly park ranger in a Smokey Bear hat. Darkness had already fallen, and Williams was making his final sweep along the eight-mile Cactus Forest Drive looking for overnight campers and lost hikers. He saw our car, but neither driver nor passenger; not even food wrappers.

Williams listened for calls for help, and heard none. He looked for flashlights bobbing about and saw none. He sounded his siren and flashed his lights. We could neither hear nor see him. We kept up our occasional “helloooo!” He could have driven off during a “hellooooo!” none the wiser, completed his rounds, and gone home. Honey, what’s for dinner?

Regla thought she saw a dim blue and red light in the direction of the Loma Verde parking lot but it never occurred to either of us that they’d be lights of our salvation. We shouted. Was that our faint “helloooo!” Williams heard? It was. He walked up the Loma Verde and Squeeze Pen trails toward us. He yelled hello. We were ecstatic and yelled hello back. From that point the experienced park ranger easily located the inexperienced walkers. Relief dominated our emotions. For Williams it was all routine work, but clearly, he had saved us from a frightful night. We were rescued; I wanted to hug him.

As he escorted us down to our car, Regla, a big-city girl, acknowledged that she was “scared to death of wildlife.” Replied Williams: “Oh, you would have had an uncomfortable night, but you’d have made it.” We arrived at the trailhead shortly after 8 o’clock. The temperature in the park sank to the mid-40s that night. We stopped for Chinese on the way home.

© Copyright 2022 Tom Miller. May not be reprinted without written permission.