Local Reunion of the year

The Sidewinders get back together for the performance of Witch Doctor 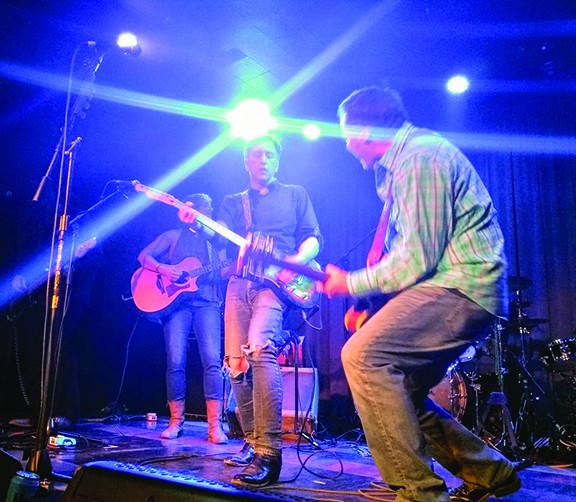 Slutes and Hopkins have led very different lives since the band broke up in 1993, with their infamously volatile friendship coming to a place of gratitude and ease.

"I'm just glad we have the opportunity to play together from time to time," said Hopkins. "Dave and I have moved through a lot of stuff."

Even in the best of times, Slutes and Hopkins could be like oil and water. But together they had chemistry, and whatever might have challenged them off stage has translated well into their collaboration as songwriters as well as performers of those songs. Their band had a sound and a following, and in 1988, a minimum two-record deal with the up-and-coming indie label Mammoth Records.

"To us, this was a big deal," said Hopkins. "We hadn't done a whole lot getting noticed (by the major labels) and here was this brand new label."

With a $3,000 advance, Hopkins, Slutes and band, continued work on the follow-up to their first record Cuacha, their inaugural self-release that started it all.

Mammoth aggressively arranged an East Coast tour as a way of prepping the band for a New York City showcase gig that would be attended by various record execs, including people from RCA, which Mammoth had been especially keen on. Slutes recalls the New York showcase as "the best night of my life! We had a great set and we knew it. We knew they would sign us." This was especially gratifying given their on-going bouts of impostor syndrome that left them feeling as if someone would realize they were awful and unworthy of being signed.

Remember, this was before Spotify, before streaming, before Napster, before anyone with a computer and a little software could make a record in their living room. In these days, getting signed to a major label was a huge deal in terms of receiving promotional, logistical and monetary support for touring and making records.

"Unfortunately, who knew how many weird things would happen after they signed us," said Slutes with a good-natured smirk and the benefit of hindsight. Not the least of which was getting sued by a North Carolina cover band and having to change their name. Hence, the Sand Rubies. In spite of some critical success for their Auntie Ramos Pool Hall recording, however, things were never quite the same. Five years after the release of Witch Doctor, it was over. They were done.

In the years that followed, Slutes settled into his job as Entertainment Director for Club Congress and stayed mainly off the stage. The big exceptions were his semiannual Halloween and/or New Year's gigs with the Zsa Zsas. As the leader and lead singer of a faux European Lounge act dressed in cheesy tuxedo garb, Slutes would indulge in a thick accent and caustic attitude, insulting the audience (and band members) in a way that would make Sacha Baron Cohen proud. It was great schtick.

The Zsa-Zsas also featured Slutes' close friend Gene Ruley, who—until his death in the summer of 2018—was as close a musical collaborator as Slutes would have, post Sidewinders. As a current side project, he's working on 22 songs of Gene's, preparing them for some kind of eventual release.

Hopkins on the other hand has had a fair amount of time on stage and even more recording. His post Sidewinders project, Rich Hopkins and the Luminarios has released numerous CDs, EPs and singles on his own San Jacinto label. He's also toured regularly in Europe, where he's a bit of a rock star.

Equally significant are the various collaborations Hopkins has cultivated these past 25 years.

"I was too young to experience the Summer of Love," he says when talking about how amazing it was, almost by chance, at being asked to play with Barry Melton, guitarist with Country Joe and the Fish, and how that turned into a series of gigs and a friendship as well.

Hopkins now enjoys a musical partnership with his wife (remarried since the Sidewinder days) Lisa Novak, and their latest CD, Back to the Garden (under the Luminarios name), is an inspired mix of tunes that stylistically invoke everyone from Neil Young & Crazy Horse, to Tom Petty, to the Byrds, to the Band. As a co-writer on every song and co-producer as well, her influence is all over this project while their energy together is palpable.

Onstage in November for that 30th anniversary celebration, Hopkins and Slutes began their show tearing into the opening track from Witch Doctor. Hopkins came over to share Slutes' mic for a vocal. The guitars were big, the smiles bigger, and while it wasn't exactly 1989, in that moment, time stood still and life was good.