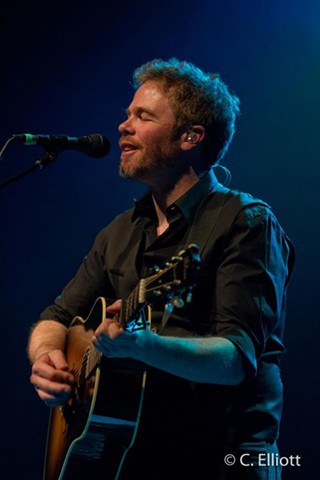 Once Josh Ritter has your attention, there's no turning away.

Ritter is among the sharpest and most distinctive lyricists recording today, and his first Rialto performance began like his career did, quietly acoustic before blossoming into the full-band folk-rock that characterizes his excellent new album, The Beast In Its Tracks.

Bounding onto the stage before the lights came up, Ritter started with the plaintive "Idaho," from 2006's The Animal Years, singing about those adventurous dreams that spring from his landlocked home state. For "Southern Pacifica," Ritter was joined first by the keyboardist and then by the rest of his Royal City Band.

The band then kicked into "New Lover," one of the many standout tracks on The Beast, a record that fits into the "breakup album" mold only at times. Though sparked by his divorce, Ritter's songwriting is that of a man approaching the world anew instead of wallowing. "There are things I will not sing for the sting of sour notes," he sings, delving into a meditation on expectations and adaptation.

Dressed all in black, Ritter performed with an infectious smile, leaning back from the microphone to let the crowd share in singing favorites like "Girl in the War," "Wolves" and "Change of Time."

Midway through, the band stepped aside for Ritter to perform solo again, with new song "Third Arm" leading into the furiously strummed "Rattling Locks" and then "Folk Bloodbath," a stunning narrative written in the spirit of the old folk murder ballads.

Ritter continued mixing fan favorites like the mummy-comes-to-life tale "The Curse" with new material like "Joy To You Baby," which he'd performed four days earlier on The Late Show with David Letterman. The set closed with "Kathleen," a would-be hit from Ritter's 2003 breakout Hello Starling album.

Led by the big, brassy voice of singer Rachael Price, Lake Street Dive made plenty of new fans during the opening set, with the Brooklyn-via-Boston quartet playing a poppy Americana update of Motown soul. For the encore, Ritter welcomed the openers back to the stage, ending the two-hour show with "Lights," a Lake Street Dive original and then "To the Dogs or Whoever," yet another song that unspools an imaginative narrative, Ritter's quick-sung lyrics tying together Joan of Arc, Jesus and Casey at the Bat as only he can.